Strolling across the wooden bridge in Icheri Sheher, we turned away from Maiden Tower, looked across the old bazaar area and spotted the sign ABAD at the entrance to the former Haji Bani Hammam (bathhouse). 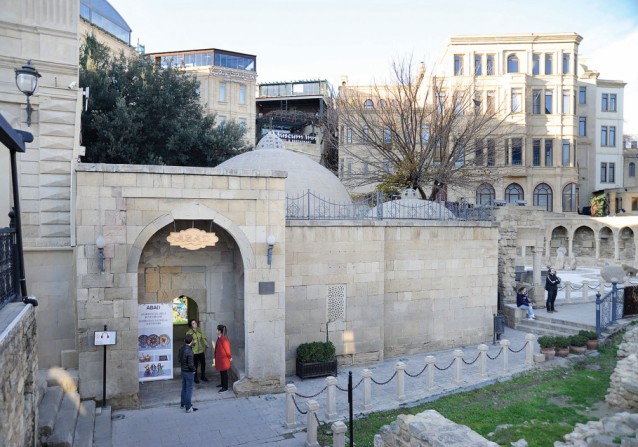 For all the leaps and bounds in information technology, life can still be enlightened by old-fashioned word of mouth and we first heard about ABAD from a friend of a friend who worked there. And so it was that we met Ulvi Badalov, Deputy Director of ABAD, family business support. Arriving early at the project’s first crafts centre, we were glad of an offer from enterprising staff to view and hear about the attractive variety of products festooning the shelves before adjourning with Ulvi muellim to pick up on the background and philosophy of the project that helped produce them.

ABAD is a government initiative, part of a programme to develop socio-economic life in the regions, and began its official life as a presidential decree on 23 September 2016.

We had approximately three months to establish the ssatems, the project, to get all the staff. We started with two pilot regions. One is Masalli, the second is Balakan. We already have an ABAD centre functioning in Masalli; the regional centres are offices where we provide all the services offered by ABAD. And the second is the Balakan regional centre.

It’s an agency for social projects that is unique, because it supports, first of all, family businesses

The craft centre in Icheri Sheher opened on 19 March and there’s a second one in the airport’s duty-free zone. These are the first outlets for the first branch of ABAD’s support work; the second branch promotes products from the ever-fertile agricultural regions. 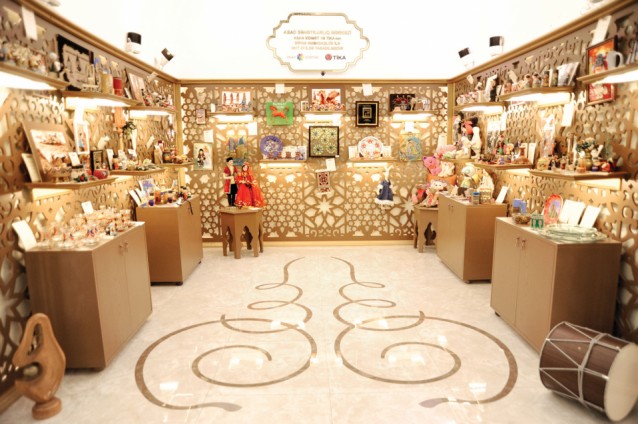 Ok, we’d seen some fine craft works in the centre, but how does ABAD help to get them there?

It’s an agency for social projects that is unique, because it supports, first of all, family businesses. We support them through every step from production to sales. We provide a lot of services; we provide them with equipment, or consultation on equipment, depending on the family business. So we provide also branding, design services, financial and juridical consultation, marketing, all logistical services and sales. Then we channel revenue from product sales to the family’s bank account, through ABAD. So we are with the family from the very beginning to the end.

The socio- part of this socio-economic project is clear from the fact of people in the regions being given the opportunity to use and share their skills, with links to the capital and a network of fellow artisans. But the -economic part is at least as important. And we had to ask how much of the sales income made its way to the family’s bank account. 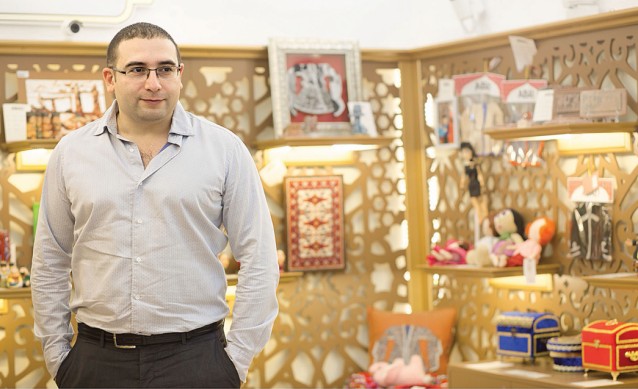 ABAD signs a commissioning contract with all the businesses and, depending on the business, takes a small amount of the revenue, normally a small percentage, just to pay outsourced services. We outsource logistic services, we also outsource the packaging, warehouses, marketing, some of the consulting, some equipment, so we have to pay for those.

As for the agricultural part of the project, many of us have enjoyed the delicious cheeses and creams made from the excellent sheep’s, goat’s and cow’s milk produced in the regions – not to mention the sausage, jams and honey – but it has not been easy for small farmers to get their products to the wider markets. Ulvi explains that ABAD has worked on the main obstacles: lack of information, finance, packaging and certification.

Certification is especially important in terms of guaranteeing the quality of the product and for this there has been cross-departmental cooperation within government to arrange all the necessary laboratory testing and open a single-window system for certification. ABAD also helps by providing equipment and packaging; food technologists and marketing experts are on hand to offer advice, and customers of the Bravo supermarket chain can already see for themselves the tastes and skills of the regions.

As we spoke, the aim was to have up to 40 producers working with ABAD to bring countryside produce to the capital’s markets by the year’s end.

Of course, for both craft and agricultural branches, further numbers were on the cards and expansion into every region was targeted, and as we went to press at the year’s end, 178 families/ small businesses were working with ABAD and a further regional office has opened in Quba. There are also further shops in Baku’s railway station, at the Tufandag resort in Qabala and in Demirchi village near Shamakha. Ulvi also spoke of the support to help family businesses themselves expand: 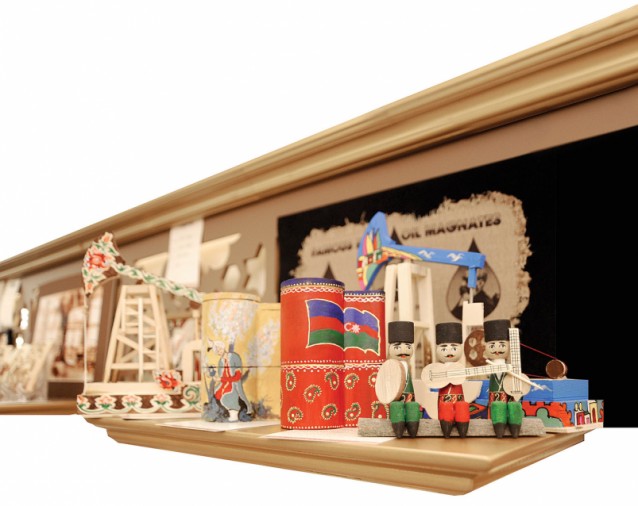 While 23.09.16 was ABAD’s official birthdate, the story of the presidential decree’s gestation is an interesting indication of the government’s overall philosophy to develop the regions and, more widely, to promote initiative and innovative thinking about the country’s further development from the base already established by successful exploitation of its mineral resources. Ulvi explained that the idea was generated by the State Agency for Public Service and Social Innovations, best known for establishing the ASAN XIDMET service in 2012 to streamline and make transparent people’s access to a whole range of government services. ASAN has a broad brief to promote social innovation and it was discussions there that led to ABAD:

The idea actually started from ASAN. ASAN members and top management are always brainstorming and they were talking about this idea for half a year because they wanted to create some new social projects...

After their brainstorming, they decided that they should share their thoughts with officials. It was just an idea, raw material, for the officials who analysed it, thought about it, and [snaps his fingers!] a presidential decree...

After that, they really started to pick things up, one by one; from the agency - from ASAN - from the outside, to create a very innovative, young staff that would be enthusiastic about doing this work.

Ulvi Badalov was not, himself, in at the beginning. He joined a couple of months after the decree, as an expert head of department on the financial and agricultural aspects of the project, moving on after three months to become deputy director. This was after a career in the private sector that had kept him away from his homeland for 15 years and moving across four continents. He cites the idea behind ABAD, the challenge it represented and the team involved as the main reasons for his move to a government-sponsored project back home.

He expands on the socio- aspects of the work, pointing out that as the first outlet was based in Icheri Sheher, many of its customers are among the greatly increased numbers of tourists that have visited the country in recent years. For many of them, a trip to Azerbaijan is still a journey of discovery to a little-known country and so there the shop and its products represent an opportunity for them to learn more. Ulvi’s patriotic pride in his people’s culture and skills combine with his expertise in business to explain:

... So we give all the information about the woodcarvings, about our silk keleghayis [exquisite traditional scarves], our carpets, copperwork from Lahij, about everything: their history, what they mean or where this pattern comes from, the idea behind the pattern. Everything! We think that in providing information about the culture of Azerbaijan, the products, in this global world, every Azerbaijani is an ambassador of the country. And it’s very important that if you want to become successful in the international arena as an economic model, or as a family brand, or as a cultural heritage, we should know all about that – it’s all about marketing....

... We try to use all the channels. We have information on our website about every artisan, we have booklets and certificates for every product, we have a TV monitor inside the shop that shows the process of creating the handicraft, the process of the artisan’s work.

He moves on to describe the rigorous monitoring processes to ensure quality and, especially on the agricultural side, the hygiene and cleanliness of the regional workplaces, and then to tease with a little information about future work. As well as expansion of numbers and areas covered, Ulvi hints at the possibility of opening ceramic centres:

We are choosing the best masters of ceramics to share their knowledge with the younger generations, because ceramics is an essential part of the people’s culture. When you use clay it means that you are staying with the land... It’s a historical and archaeological source, the first in every culture. Especially here, because we have very rich sources of clay.

This element reminds us of the Azerkhalcha project, also government sponsored, to train weavers and open up regional carpet workshops to ensure continuity of another traditional craft (see Azerkhalcha: Supporting Tradition, Securing a Future in the summer 2017 issue of Visions). Ulvi confirms the strategy:

It’s a chain in the government’s approach to the socio- economic development of the regions. So when you see different decrees signed by the president, especially about regional development, it is a systematic approach. And Azerkhalcha, ABAD and ministries like the Ministry of Economic Development, or Ministry of Agriculture, all have programmes.

Another project to liberate the abundant talents of the people of Azerbaijan, to create the conditions for them to live by their skills and enterprise and to enlighten visitors to the country as they seek artistic souvenirs of their stay, can only be good. We wish it well and advise prospective guests to check out ABAD’s website at http://abad.gov.az for information about the products and their creators.

About the author: Ian Peart is a freelance writer and editor and a former editor of Visions.