Chovgan – not exactly hockey on horseback; closer to polo, but as played by privates rather than captains, so a little more “direct” (hence more thrills and spills) as teams of five riders attempt to mallet a half-size football between the opposition’s posts.

It’s four years since we were first in Dashuz, near Sheki, to report on the President’s Cup but fate, a too close encounter with a loose Baku drain cover and a dislocated finger got in the way of a return this year. However, the final rounds were to be held near Baku and wild Karabakh horses wouldn’t have kept me away from them, so on 23 and 24 December I squeezed into the enclosed arena at the Bina Equestrian Centre, a few kilometres beyond the airport. Squeezed in is the operative word, with highly enthusiastic family crowds out to enjoy the free entertainment on both days.

We were there to watch four teams ride and strive for glory. They were the survivors of the earlier rounds in Dashuz, having seen off other chovganchi from Sheki, Barda, Aghdash, Ismayilli, Ganja and Shamkir, as well as the newly-formed Omar and Elit teams from the capital.

Ok, I declare an interest. If you have read our article from the 2013 tournament (link above) you will know of Rashad Hasanov, whose father helped save the Karabakh horse breed in a dramatic night-time ride out of the Aghdam stud when it came under Armenian fire back in 1993. This sort of story creates bonds and the fact that I hadn’t seen Rashad’s Serhedchi (border guards) team lose in a number of tournaments since then added the usual shiver of tension. The supporter’s responsibility to avoid doing anything to jinx the team… 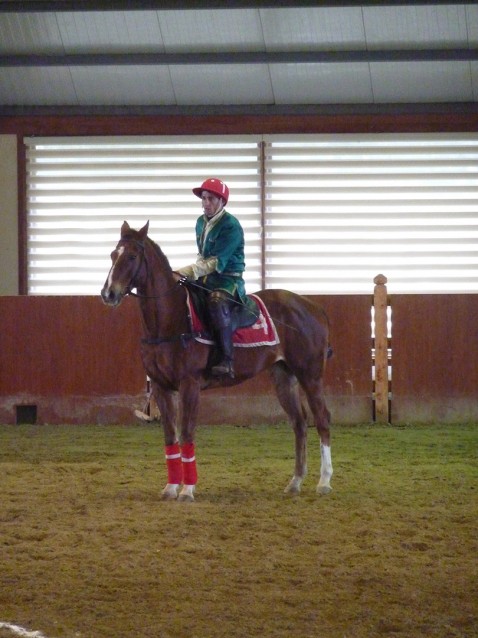 So arriving early and still having to squeeze onto a bench in the stand, we all settled to watch Polad (steel) play the first semi-final against the team from Aghstafa. Polad were hot favourites but were pegged back by a determined opponent and found themselves 0-1 down at half-time. However, they rallied after a second-half stoppage for injury, whipping in four unanswered goals for a final score that was hard on the losing team’s valiant early efforts.

The second semi-final kept us on the edge of the benches until the final whistle; Serhedchi scraping through by the strand of a Karabakh horse’s golden tail, overcoming Aghjabadi 1-0. 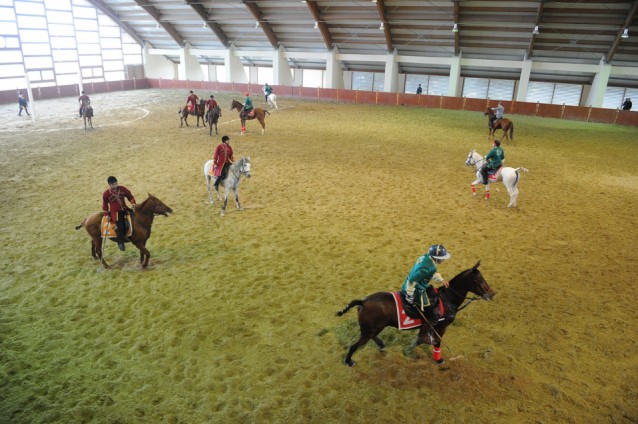 Arriving even earlier on the Sunday, I managed an even tighter squeeze into a gap on the benches between families now waving flags to add colour and patriotic fervour for this national game. The warm-up was the 3rd/4th place play-off game. Again both teams gave their all. But perhaps Aghstafa had given their best in the struggle with Polad, for this time Aghjabadi were dominant and ran out 4-1 winners.

And so to the final, Polad against Serhedchi; 15 minutes each way, with a 10-minute half-time break was the schedule, but the contest deserved, the spectators desired and the rules demanded, longer. The former are, like the metal, a big, strong team, while their opponents rely more on their manoeuvrability. The first period was played mainly in Polad’s half as Serhedchi weaved, pushed, probed and shot… wide… many times. Then a determined break-out counter attack saw them punished for their profligacy and Rashad’s team went into the break 0-1 down.

For 10 minutes fingernails (9 of them, the other encased in a splint) were nibbled as I sent telepathic messages urging Serhedchi to control their shots rather than trying to blast the swerving ball into the next country.

Most of the crowd seemed to be with me on the edge of the benches, as flags waved and chants for the border guards echoed round the arena in a second half that followed a similar pattern. Luckily, 10 minutes in, the law of averages prevailed and one of many more shots found its way between Polad’s posts: 1-1. Tension rose, riders and horses sweated and batted, but neither team had broken the deadlock at the final whistle.

So, extra time, five minutes each way. For the first half and four minutes of the second the two evenly matched teams strove might and main for control of the ball until, with 30 seconds remaining, from a frantic melee on the far side one rider got his mallet to the ball and propelled it gently between Polad’s posts. There’s surely no need to tell you whose mallet it was, or how it was whirled round his head as he and his teammates hurtled round the arena in wild celebration. 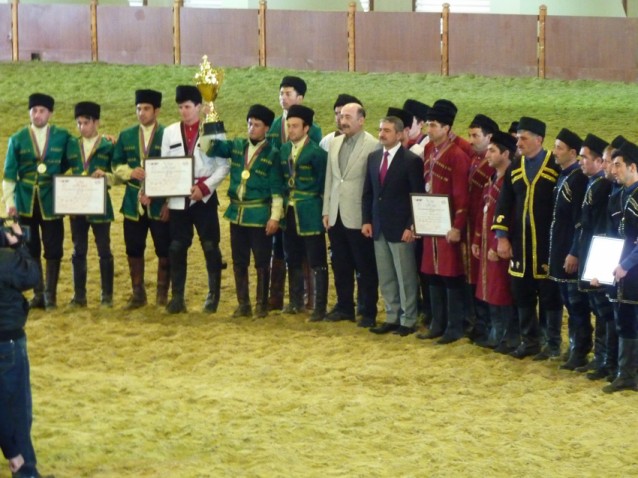 The presentation ceremony was more solemnly observed, with all four teams kitted out in traditional costumes and papaqs and lining up to be congratulated and presented with medals by Minister of Culture and Tourism Abulfas Qarayev and President of the Equestrian Federation Elchin Quliyev. Finally, the President’s Cup was handed to one Rashad Hasanov. For this writer, the perfect end to a superb event.

Sean Martin Barry Barry added Jan 24, 2018 in 17:12
Sounds like a classic cup final, with Chovgan the winner on the day. Sorry I missed it. Next year, Inshallah.
Magazine