Stage Set for a New Chapter in Azerbaijani Oil and Gas

On 14 September the Azerbaijani government signed an amended and restated agreement with BP and partners to further develop the Azeri-Chirag-Guneshli (ACG) oilfield, effectively extending the landmark oil and gas agreement known as the Contract of the Century. According to the new agreement, which will last until 2049, SOCAR will more than double its share in the production sharing agreement and $40 billion capital could potentially be invested in ACG. As the country embarks upon a new chapter in oil and gas, BP’s Guivami Rahimli presents a brief overview of the major developments of the last quarter century.

The collapse of the USSR in 1991 led to challenging times in the early history of independent Azerbaijan. The country, located at the crossroads of Europe and Asia, occupies an important geopolitical position where regional actors have strong economic and political interests. After the collapse of the Soviet Union, Azerbaijan attracted the attention of the big players in the oil and gas business, especially those from the USA, UK, Norway, France and Japan. British oil major BP was already investigating opportunities in the region. In September 1992, to promote Azerbaijan’s business interests, government officials invited Margaret Thatcher, who played an important role in the downfall of communism and establishing BP connections in Baku. 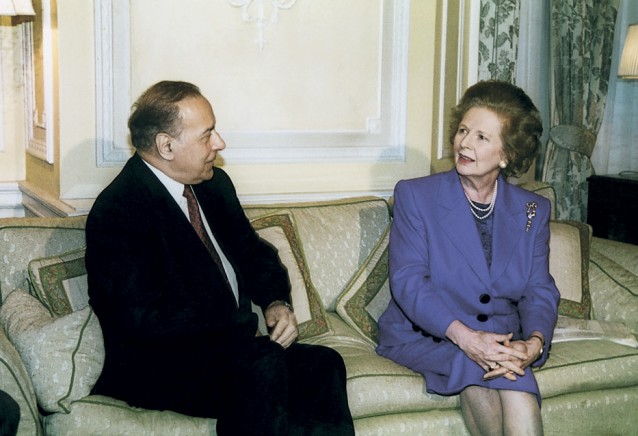 Margaret Thatcher, also known as “The Iron Lady,” was one of the world’s most influential and respected political leaders of the 20th century. She was Europe’s first female prime minister, as well as the longest-serving British prime minister in the 20th century, winning three consecutive terms. It was the first visit by such a senior Western politician to newly independent Azerbaijan. During her trip to Baku, Baroness Thatcher attended the signing ceremony of a preliminary agreement between the government of the Azerbaijan Republic and BP on exploration at the Chiraq oil and Shah Deniz gas fields. She expressed her hope for the development of comprehensive relations between the UK and Azerbaijan. Today, it might be hard to appreciate how much this meant for young Azerbaijan, having Margaret Thatcher visit, raising international awareness of the changes under way in the young country and attracting international companies and their business to Azerbaijan.

During the same period, the presence of American oil companies trying to establish their business in Azerbaijan resulted in confusion and hostility from the American government, which is believed to be the result of lobbying of Armenian-American groups in the Congress, and in the autumn of 1992 Section 907 was added to the Freedom Support Act, banning direct aid to Azerbaijan and providing generous assistance to Armenia. The consecutive events in the early days of independent Azerbaijan demonstrated the need for an exceptional leader, as the new nationalist leadership was not capable of governing the country, having no political experience or control over government apparatus.

At the time, the critics of Heydar Aliyev called it an unrealistic pipeline dream and an irrational infatuation

During these tough times, in 1993, Heydar Aliyev returned to the political arena and introduced a pragmatic foreign policy. It meant building constructive relations with powers like the USA, EU and Turkey, as well as wise partnerships with actors like Russia and Iran, thus balancing the relations with major global and regional powers. Azerbaijan’s multi-vector policy became a state strategy, avoiding allying with any geopolitical bloc but opting for economic, energy and military cooperation with both sides. Heydar Aliyev, who was also experienced in petro-politics, had a clear vision regarding relations with the main actors and in 1994 Azerbaijan signed the Contract of the Century with foreign oil companies despite various crises in the country. It was the biggest deal ever signed in the former Soviet Union to develop the Azeri, Chirag and Guneshli (ACG) fields in the Caspian, which were vital for the country’s economic development. However, it’s important to note that the country was still unstable, young and fragile, which represented a risk to some investors to do their business in such a state.

The consortium established by the oil companies started a pilot – an early oil project. The main objective for Azerbaijan in this sector was to build trust and confidence with foreign investors and attract sufficient investment for full-field development of the ACG project and construction of the main Baku-Tbilisi-Ceyhan (BTC) export pipeline. At the time, the critics of Heydar Aliyev called it an unrealistic dream and an irrational infatuation.

Supporting these developments was an utmost priority, especially by taking on the challenge of transforming the pipe dream of the BTC project into a pipeline reality. The BTC vision was ambitious and needed an in-depth commitment and understanding in the hermetic worlds of business, politics and technology. If such a pipeline could run to the Mediterranean, it would create a critical new source of supply meeting the demand of vast regions in the West that are so hungry for oil. This would help strengthen the independence of the countries after the fall of a big empire and provide the newly independent states with a degree of control over the export of their most valuable commodity. The alternative could be a reiteration of the old empire scenario, regaining the control of the new sovereignties, and leaving the export of ‘‘black gold’’ in the hands of Russia. As a result, the new states would be under constant threat and potentially divert their energies to non-productive geopolitical concerns.

In order to strengthen independence and stimulate the country’s economic growth, the Azerbaijani government encouraged the visits by money lending agencies – executives from the World Bank, IFC, EBRD, ECAs, and other influential stakeholders as well as VIPs to the BP-operated Sangachal oil and gas terminal. The trips were the best way to convey messages and show the work being done first hand, thus promoting the support of new project developments, and attracting foreign investment. 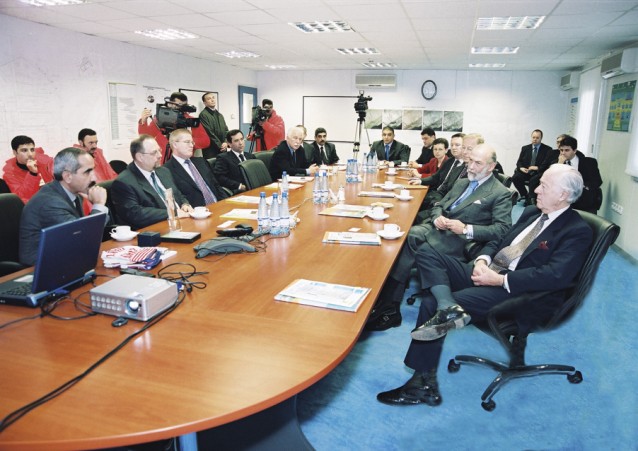 During Prince Michael of Kent’s visit to the Sangachal oil and gas terminal in February 2004. Photo: courtesy of BP

The visit of Prince Michael of Kent of the British royal family, which took place in February 2004, was a memorable event for me. The minister of culture and tourism, Abulfas Garayev, was hosting the prince’s visit on behalf of the government of Azerbaijan.

The trip included a familiarisation visit to the Sangachal terminal, currently the biggest BP-operated onshore asset worldwide, which at the time was under construction as part of the ACG developments. I prepared a detailed programme for the Sangachal visit. The business update presentation drew a good overview of how we run such a complex facility and pipeline operations, which play an important role in the energy security of the region. The bus tour to the construction site and BTC head pump station gave the prince a clear picture of the tremendous progress at the terminal and helped him to build a wider understanding of the nature and scale of BP’s activities in the region. We also took Prince Michael to the newly built training facility which had two of the most advanced technologies in the region – the drilling simulator and the operations training plant. In the drilling simulator room, the trainer took him for a test run to make him feel the sense of industry first hand. The visit gave the prince a real flavour of what the terminal expansion entails as BP’s major operating centre in the world. All in all, the visit went very well as was evident from Prince Michael himself, when he shared his impression through the media, with extremely positive feedback of what he had seen here. This was an excellent statement showing the potential and importance of these huge developments for the whole region. Azerbaijani minister of culture and tourism Abulfas Garayev with Prince Michael of Kent at Martyr’s Alley, February 1994. Photo: courtesy of the Ministry of Culture and Tourism of Azerbaijan

Moreover, it was a further testimony to the fact that the states of the South Caucasus are independent and sovereign actors, where Russia had a historical right to influence but was no longer able to dictate its decades-long covert and overt policy against them. It also helped shatter the old propaganda that a prosperous neighbour across the Araz River who maintains cordial relations with the West can pose a threat to Iran. The prince’s visit was a complete success. It empowered me with a sense of pride as I helped achieve such a worthy goal.

Contract of the 21st century

Today, this is a history that fills me with deep emotion and I get a great sense of gratification for being a part of Azerbaijan’s history in the making, a history that has changed Azerbaijan into a successful model for the world. The BTC pipeline has transformed strategic realities in the South Caucasus. The new Southern Gas Corridor project, a system of mega-pipelines, today is a major component of EU energy policy. The energy networks of Azerbaijan, Georgia, Turkey and the Trans Adriatic Pipeline have become more integrated, increasing the significance of the East-West energy corridor.

The extension of the Contract of the Century signed on 20 September 1994 opens up a new chapter in ACG’s success and indeed in Azerbaijan’s energy story as a “Contract of the 21st Century,” concluded on 14 September 2017. It is an exciting opportunity to continue this “win-win” partnership in one of the largest oilfields in the world until the middle of the 21st century. The renewal of this contract reinforces, for decades to come, the deep and special co-operation between the United Kingdom and Azerbaijan in the energy field... It is an important long-term investment that will help solidify our strategic partnership in the energy field and contribute to our joint prosperity for years to come, stated Prime Minister Theresa May in her congratulatory letter to President Ilham Aliyev. The new deal, of course, is an important milestone in the history of Azerbaijan as it ensures new investments and new technologies to maximise recovery of the ACG field’s potential, bringing a greater degree of sovereignty, stability and prosperity for the country and thousands of jobs in the years ahead. From the geopolitical perspective, Azerbaijan has become the undisputed champion of energy exports from the Caspian to European markets through the continuation of this deal. 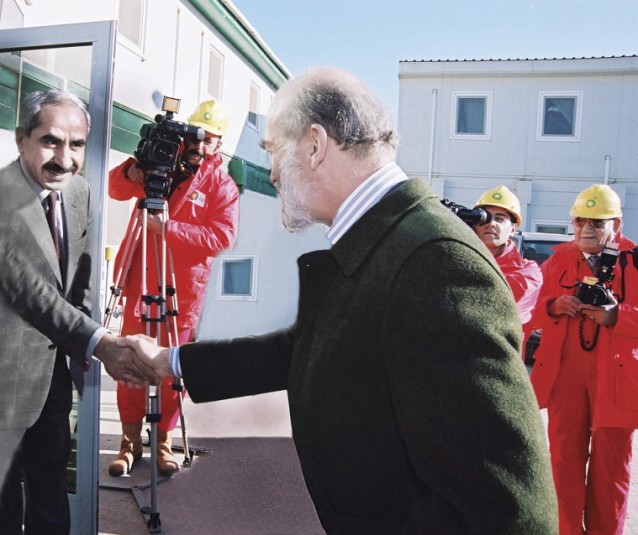 The author meets Prince Michael of Kent during the latter’s visit to the Sangachal oil and gas terminal in February 2004. Photo: courtesy of BP

These projects aim at improving the security and diversity of the EU’s energy supply by bringing oil and natural gas from the Caspian region to Europe. This cooperation provides economic benefits to all the players not only in the South Caucasus, but also to many countries in Europe. Mutually beneficial relations with foreign countries helped Azerbaijan to secure the votes of 155 countries during its election as a non-permanent member of the UN Security Council in 2011. Peaceful relations with countries from different cultures and civilizations have created an atmosphere of trust and dialogue, which Azerbaijan has been working to strengthen via the World Forum on Intercultural Dialogue and Baku International Humanitarian Forum, successfully promoting the values of multiculturalism.

About the author: Guivami Rahimli joined BP in 1995 as a government relations expert and currently serves as Community Relations Team Leader for the BP Azerbaijan, Georgia and Turkey region.