Diaspora
by Vusal Hamzayev
16300
Documentary films on the Karabagh conflict, made by Armenian and Azerbaijani film-makers, were shown on 26 May at London’s School of Oriental and African Studies. The event was organised by Simon James, himself a film producer, with the aim of looking at how the conflict has been presented by the media on both sides. A panel discussion followed the films. The panel was chaired by Jonathan Cohen of Conciliation Resources and its members were Laurence Broers of Amnesty International, Mark Grigoryan and Famil Ismayilov from the BBC and Tom de Waal of the Institute for War and Peace Reporting. The event was attended by Armenian and Azerbaijani students, other London University students and interested parties.

Armenian films Dark Forest in the Mountain, Wounds of Karabakh and Welcome to Nagorno Karabagh showed the conflict from the point of view of Armenian propaganda. The first film presents as fact that Armenians have been killed by Turks for centuries, that the Ottoman army carried out a pogrom against Armenians in 1915 and that Azerbaijanis "disposed" of Armenians in Sumgayit and Mountainous Karabagh. The Armenian films dwell in particular on the events in Sumgayit and try to prove that they sparked the Karabagh conflict.

The final Armenian film to be shown, Welcome to Nagorno Karabagh, gives the impression that Karabagh is prospering, that the value of foreign investments has increased and the economy is developing. At the end of the film a cross is shown being placed on a newly repaired church. Destroyed and ruined Azerbaijani monuments, mosques and cemeteries in Shusha and other regions of Karabagh are not shown in any of these films.

Five short Azerbaijani films followed. They show the horrors of the 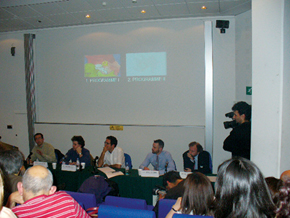 war and the refugee camps and include footage of the Khojali tragedy. The films confirm once again that the nation of Azerbaijan is still humane and hospitable and has no sense of hate against other nations. Azerbaijani students and intellectuals formed the majority in the audience during the post-film discussion. The debate became heated at times. One of the Azerbaijani students, Bakhtiyar Mammadov, said that the Azerbaijani territories would be returned either through 10 years of negotiations or three years of war. The chairman of the Azerbaijan Society in London, LSE student Tale Heydarov, said that Azerbaijanis had never behaved negatively towards other nations, but on the contrary had always lived in brotherhood with other ethnic minorities, while Armenians had always had territorial claims not only on Azerbaijan and Turkey, but also on Christian Georgia, and had been living with the idea of "Great Armenia" and hostile intentions against the Turks.

The Azerbaijani participants in the discussion denied the Armenian view that the Sumgayit events had given an impetus to the Karabagh conflict. They emphasised that it was illogical to look for the root of the conflict in the Sumgayit events.

The films and subsequent discussion revealed Armenian intentions and this was confirmed by some of the foreign participants. It was noted in conclusion that what is essential is simply to show the bitter results of the Karabagh conflict and to search for a solution to the problems.