The Music Pulls You Back: Visions Meets Anna Oldfield

Dr. Anna Oldfield, Associate Professor of World Literature at Coastal Carolina University (USA), lived in Azerbaijan in 2005-2006 on a Fulbright-Hayes Fellowship to study women ashug (bardic) singers. She is now on a short visit to Baku after nearly a 10-year absence. In late October, Visions writers Ian Peart and Martha Lawry caught up with Anna over coffee at Baku Roasting Company.

VoA: What brings you back to Baku?

A.O.: I just came from six weeks in Almaty, Kazakhstan, where I was on a Fulbright Specialist grant to teach a seminar in translation studies at the Kazakh National University of World Languages and International Relations. On my way back, I thought, this is my chance to visit Baku. I changed my ticket so I could come here. So here I am in Baku, after about ten years, not counting a whirlwind weekend visit in 2013 for a conference on Turkic folklore in the Karabakh context. I've been determined to get back here somehow. My memories of Baku are mostly from 2006.

What are your impressions of Baku now compared to when you left?

It has changed! Some amazing architectural changes, of course: the Flame Towers; down at the boulevard, the park is just beautiful. But I'd also say a lot of things haven't changed. People are much the same - still warm, still qonaqperver (hospitable), still very kind, still love music. There's an incredibly high level of music here. There's something about the sound of Azerbaijani music that pulls you back. 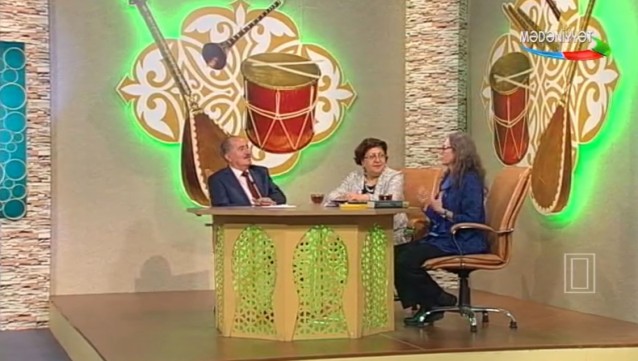 During your visit here over the next two weeks, what musical involvement do you plan to have?

As much as possible. Of course when I was here before, I was very involved in the ashug world because I was writing my dissertation on women ashug singers, and I worked very heavily with the Azafli family - Gulara Azafli, Minaya Azafli was my saz teacher, their sister Dilara who passed away was also very helpful to me, their brothers, cousins... the whole family really adopted me and my son and brought us into that world, and I still feel very close to them like family. So for me, the ashug world of Azerbaijan is really like a kind of home. Another person who helped me immensely with my dissertation is Maharram Qasimli. I consider him my Azerbaijan dissertation adviser. He really helped me to understand the art in a much deeper way. So I was thrilled to see some of those people again.

Another person who really helped me is the scholar Emine Eldarova, who passed away a few years ago, but I have translated her book into English so I am planning to talk with someone about getting that out. I would like her legacy to be seen in the western world. Since I've been doing research in the West, I've seen there's a tendency to dismiss the contributions of Soviet era scholars from Azerbaijan. Western scholars like to pretend they discovered Azerbaijan, but in reality Azerbaijani scholars have already done amazing research [in the field of music]. That's another mission of mine, to get Azerbaijani music more heard in the West.

Another reason I came here is I just wanted to re-establish my connections. It's a place where you need to have the person-to-person [contact]. I really needed to get back. Now I'm determined to come back again sooner. I've been gone a little too long.

What can you tell us about your current projects?

One of my main current projects, and another reason I had to come to Azerbaijan because it's very important to this project, is this: I'm starting to work at Coastal Carolina University on what we call a "teaching archive of musical storytelling" focusing on Caucasus and Central Asia Turkic societies. Part of the reason I wanted to do this is that the United States has become increasingly culturally isolated in the past several years, and in fact many people still don't know where Azerbaijan is. Even teachers who want to teach about Azerbaijan have no information; they have no good translations of literature. I teach World Literature; that's my field. I know every anthology of world literature out there, and there's nothing available from any Turkic culture of the former Soviet Union. The website [we are making] is meant to work through music, because if people don't know much about a culture, listening to the music is the most direct way.

In 2005 I was lucky enough to bring ashugs Gulara Azafli and Zulfiyya Ibadova to the San Francisco World Music Festival. I didn't know how American audiences would react to ashug music, but they brought the house down! They performed twice, once in San Francisco and once in Berkeley. The audience was so excited, and I realized they didn't understand a word. But it didn't matter. Music goes straight to people. So I thought, to teach Azerbaijan to kids, youth and college students, start with music. Start with ashug music and mugham music, but also combine music with good translations so you can teach it in a world literature class. Then the class can watch the video and study the words, and it will be made in a way that I can teach teachers how to use it.

You see Baku from a distance now, having been gone for ten years. From that perspective, what are the memories of it that most stick with you now?

I think the thing that has stuck with me and that really hasn't changed is the vibrant energy. I went to Torgovy (Nizami Street) yesterday evening and it has always been such a lively place; you go and even if you're walking by yourself, you don't feel alone. There's just a real liveliness. Sometimes it's hectic, like on the subway with people crowding in, but it's also really exciting.

I went to the Museum of Musical Culture which has moved to the Museum Centre, so I saw the Museum Centre for the first time, which is really nice, and I saw a beautiful concert by the Ancient Instrument Ensemble, dedicated to the memory of Majnun Karimov which Alla Bayramova hosted. When I had been in Baku before I saw Majnun Karimov performing with the same ensemble at the Museum of Musical Culture, which was then on Rashid Behbudov Street. So that was an example of the continuity and change.

Also the way people remember me in Azerbaijan... people have a deep memory here. You know, I haven't been here for ten years, but people still remember, which is nice.

morgan P added Nov 07, 2017 in 18:31
Excellent article! Well-written. Learning about a passion for music in that culture is enlightening.
Magazine