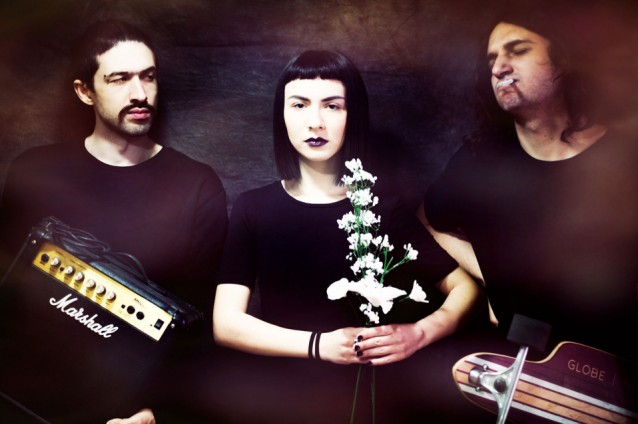 We know smoke-filled dives from Baku’s old cellar-based Jazz Club, but the first time we saw Dihaj at Etud, we almost needed a knife to slice a hole in the smoke and glimpse the band in action. But Etud is an underground vault that naturally generates atmosphere, as proved by last Saturday’s ticketed return to the crypt for the band’s late-night live rendition of album #1, T.E.O.S. (The End of Sunrise). Tickets for an Etud event? Well yes, but the big shock came with a note on the ticket – NO SMOKING. Really? Listen and breathe at the same time? A new rule for concerts apparently, perhaps a brave attempt to keep performers among the living for a while longer.

Amazingly the rule was obeyed, even by Diana Dihaj herself, who had to wait to the end before cadging a cig and running outside. The atmosphere suffered not a bit; the place was still heaving - with bodies, rather than gasps for air. The tickets claimed that the group now plays “immersive doom pop” (they’ve moved on from the “experimental” variety of doom pop of a few months ago) and the posters showed them in their customary black, so newcomers might have been surprised by the relaxed, joyous ambience of a friendly, familiar crowd.

As you read in Spring’s Visions (you have read the interview?) they are experienced, excellent musicians: Diana’s voice (strong ethereal?) and individual keyboards (both types), Anar’s compelling guitar licks, now playful, lyrical or driving, along with Ali’s determined mix of acoustic and electronic drumming make their music as magnetic as anything the senior of us has heard since Punk or early Radiohead. The backdrop film loop, produced as a promo for Diana’s Eurovision appearance, was deliciously doomy and tangential, its repeated spattering of Anar with its final credits was a teasing challenge to the concentration. 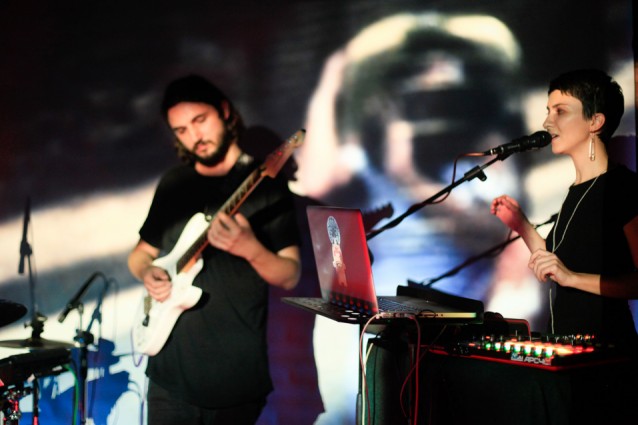 Anar and Ali left the stage for the final two numbers; the soundman also went AWOL as Diana’s electronic backing dropped in clarity. This would have spoiled the wonderful I Break Again if memories hadn’t supplied what should have been there. It finished, we turned round and there was Isfar Sarabski, whose piano riff is that track’s backbone. Ulviyya Rahimova, like Diana a graduate of Beri Bakh, was also there in between her own gigs. All adding to a gladsome late night.

You don’t get better for 5AZN/€2.50/$6 – with a poster and souvenirs from Eurovision thrown in - the chalks (watch the video) and a Skeletons disc.

DiHaj are quietly and instantly accessible – making you selfishly hope they don’t get bigger – but there are surely audiences elsewhere that deserve to hear their mix of yearn, drive and lyric. Check out their album on iTunes and be sure to see them live!