Many Tiny Pieces: Quba’s Flavours Come Together in Apple and Carpet Festival

On 7 October, at the end of the apple harvest, the Visions team visited the Quba Apple Festival and Carpet Festival to see if we could capture its flavour. Here’s a free gastronomy titbit for you: the greater the surface area of a food, the more intensely humans experience its taste. So the more tiny pieces of something you have, the stronger its flavour.

“Many tiny pieces” would be an apt description for the Festival. The event was held on a paved square in front of the row of executive buildings of Quba. How do you decorate a large open space with an apple and carpet theme? You make a carpet out of apples, of course. 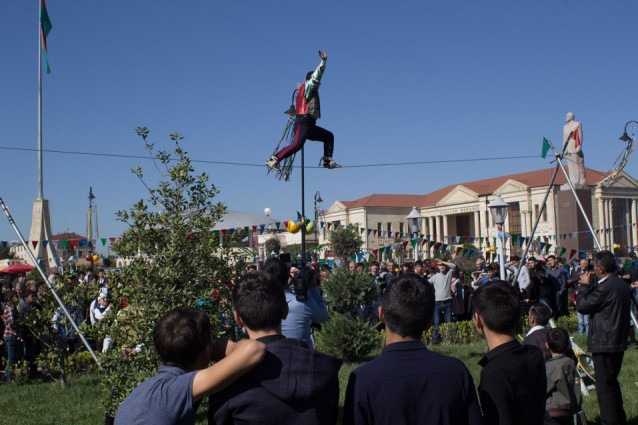 The Quba residents had arranged apples on the ground to create red and green circles, rows bordering the grassy areas, large apple shapes, and traditional Azerbaijani paisleys. The entire field was transformed into a living carpet of people milling around among the apple patterns, police trying to keep them off the grass. The centrepiece of the event was a proud statue of Heydar Aliyev which provided the only available shade on this unusually sunny day. Behind that, up in the air to form the background of the carpet, performers in athletic trousers balanced on a tightrope.

School children in matching outfits lined the borders, waiting in rows to parade across the square as they waved branches of fake white apple blossoms. Rows of preschool children in puffy apple costumes formed an elementary pattern (red apple, green apple, red…) and swayed to the background music coming from the grandstand on the steps of the central building.

At the corners of the design, bird bath-type cement fixtures were filled to the brim with apples. (I noticed as the day went on that people were eating the apples and tossing the cores back into the decorations. A fountain full of apple cores has its own aesthetic value:  a monument to satisfaction, perhaps.)

We interviewed Yusif Abidov, First Deputy to the Head of the Regional Executive Power, who told us this year was the first time the city added a celebration of its carpet making traditions as well, so the name of the event was a mouthful: Quba’s 5th Apple Festival and 1st Carpet Festival. He then mentioned something that proved key to my understanding of the day: the Festival was a chance for the region to display the value of its ethnic minorities. A statue of Heydar Aliyev stands proudly at the centre of the festival, with the snow-crested Caucasus Mountains in the distance. Photo: Tom Marsden

Indeed, people around us were speaking languages unfamiliar to my ear. Of course there was Azerbaijani, and more Russian than I normally hear in Baku. Words were also wafting around in minority languages of the region such as Tat, Lezgin and Khinaliq. There was even a booth set up to promote Meskhetian Turks. This attention to minorities is a valuable part of the Quba environment and demonstrates the same idea: many tiny pieces make a full flavour experience.

Quba is a regional centre amidst an expanse of villages and apple orchards. After the Festival we visited an orchard and spoke to one farmer, Akif Qadirov, who showed us the standard wooden crates used for selling apples. I asked how many kilos of apples one crate holds.

It depends on the apples. It holds 26 kilos of the large varieties. Up to 32 kilos if they’re small apples.

But the farmers pay a fixed amount per crate to the day labourers who pick apples and fill the crates, regardless of the weight. So a tightly-packed crate of small apples brings more bang for the farmer’s buck.

Like the apple farmers, Quba carpet makers also understand the value of packing many little pieces together. Many of Quba’s villages give their names to distinct patterns within the Quba carpet making school, which is one of the seven Azerbaijani schools. Two women who weave carpets on home looms, Tanzila Fatullayeva and Aybeniz Quliyeva, showed us their handiwork at the Festival and explained some of the key features. 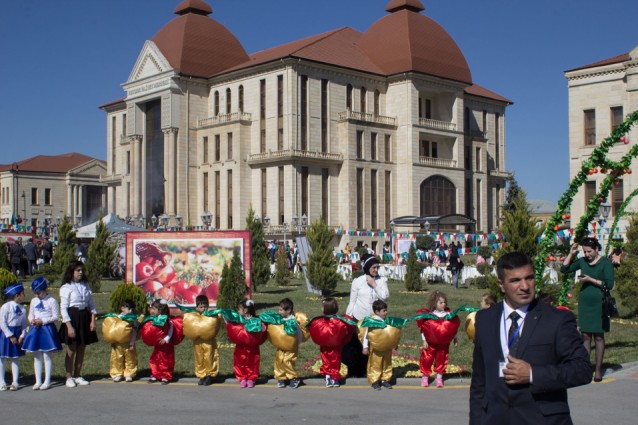 I asked about a ziggurat-shaped white pattern on the border of one carpet and they told me it was meant to represent a bowl of sugar cubes. Incidentally, sugar cubes also ascribe to the “many tiny pieces” principle: the finer ground the sugar and the greater the surface area of the crystals, the sweeter the taste. The same rule holds true of carpet making: the higher the density (the more threads are packed together), the higher the carpet’s quality. The women mentioned that Quba carpets are known for their tight weave.

At the festival, I walked up to a clump of costumed preschool girls and asked them if they would be dancing during the event. One of them looked up at me with big, wistful eyes. I want to dance, she whispered.  She was one apple in a sea of a million that day, but she was one of the tiny pieces that come together to bring Quba its distinctive flavour. And in the midst of that sweet intensity, how could anyone not want to dance?