The Lezgins are historically famed for bravery, blood feuds and of course the legendary lezginka, a Caucasian dance packing enough energy to inspire even the most placid to perform something heroic. They are also the most numerous of Azerbaijan’s great tapestry of ethnic minorities, the centre of their culture being Qusar, a town at the base of the Caucasus Mountains some 30km from the Russian border. Visions recently travelled there for the latest chapter in a gradual tour of Azerbaijan’s regional cuisine. 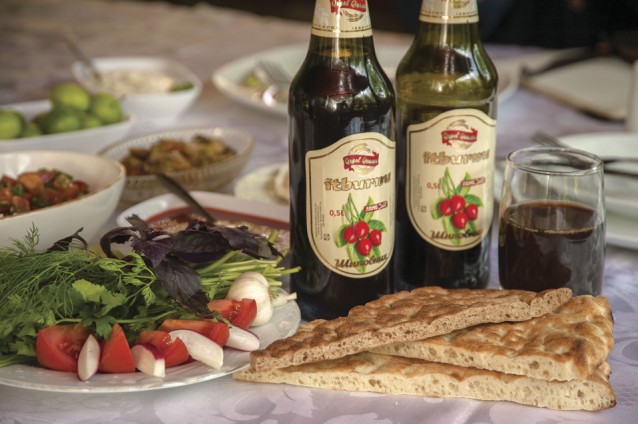 By the time we arrived at the mid-range MM Boutique Hotel in the outskirts of Qusar two hours had passed since we’d stopped for lule kebabs at the samovars and kebab stalls near Besh Barmaq (‘Five Fingers’ mountain), the first bite of what would be a surprisingly rich culinary weekend. Our guide to it would be Rasul, a Baku-based Lezgin originally from Qusar. In the regional hub of Quba, we skirted the main town, crossed the bridge over the Gudiyalchay River and snaked our way to the hotel several kilometres up the picturesque Quba-Qusar road. Once there we wasted little time in inquiring about the local cuisine and fortunately we didn’t need to go far; the restaurant itself could whip up a local feast.

At the heart of this is the kharak, a special oven used to bake pies and bread, which come in a variety of shapes and forms

Generally Lezgin cuisine overlaps broadly with Azerbaijani – think plovs, dolma, kebabs and salads – but there are some interesting national dishes and various nuances on dairy and flour-based products which, reflecting the Lezgins’ historically agricultural and cattle-breeding way of life, form the basis of much of Lezgin cuisine. At the heart of this is the kharak, a special oven used to bake pies and bread, which come in a variety of shapes and forms.

Having stationed ourselves in the hotel’s forested garden, linked together by a small maze of cobbled paths, we were served two types of Lezgin bread, the first being the most common: a flatbread with dimples all over the top, rendered with the tip of a rooster feather. The second type of bread was jarava lavash, emanating from the Lezgin word for ‘paper’ (jar). As its name suggests jarava is made of wafer thin layers of lavash pasted together with a light covering of butter, delicious when dipped in fresh suzme yogurt sauce. Then came a Lezgin speciality, afar, which are essentially qutabs with a range of fillings – meat, herbs, herbs and tvorog (not dissimilar to cottage cheese), pumpkin, potatoes and anything else foraged from the lush hills and forests of the Caucasus Mountains. 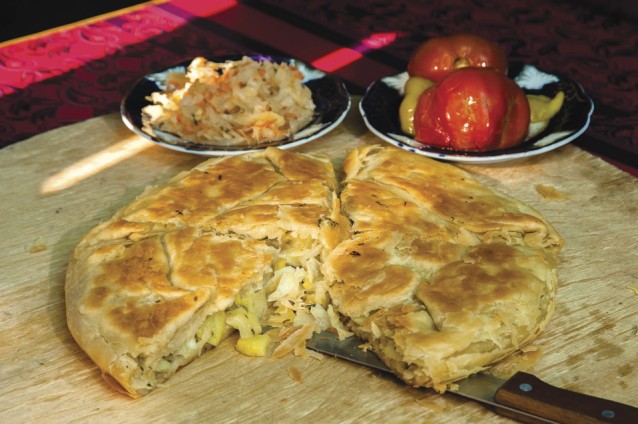 The pièce de résistance, however, and a major reason for our trip to Qusar was a dish called chkan (sometimes written as ‘tskan’) which in typical Lezgin fashion is more difficult than it looks to pronounce (‘chkan’ being a rough transliteration). To give some idea of the complexities of the Lezgin language – the alphabet has over 40 letters including three or more variations on the letter ‘K,’ all involving a sort of guttural clicking sound which come across as bafflingly similar. Nevertheless this guttural quality meant chkan fit well with my poetic image of the Lezgins as intrepid horse-riding mountaineers, fuelled by legendary personalities of the Caucasus such as Haji Davud and Sheikh Shamil. In simple culinary terms chkan is a meat pie with potatoes, cabbage, walnuts, onions, a sprinkling of thyme and lots of butter. Its hot and heavy quality makes it ideal for the cold snowy winters of northern Azerbaijan, although my initial thought was how similar it was to a British meat pie – solid and packed full of calories. There’s even a vegetarian option.

Less familiar however was the mud-coloured cornelian cherry juice, whose bitter taste caused some initial hesitation. Soon, however, we were wolfing this down with such passion that before setting off for Baku the following evening we’d virtually emptied one poorly stocked maghaza in central Qusar of its entire supply of this popular local drink. By then we’d also ordered another large chkan and a winter’s worth of Lezgin bread, but we’re jumping ahead of ourselves. 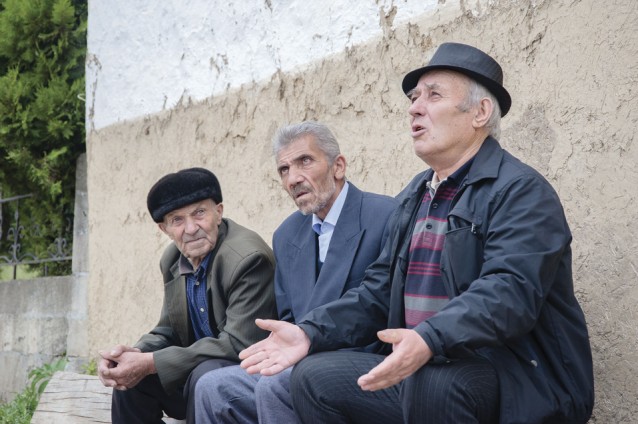 Soon after lunch we ventured deeper into Lezgin culture and cuisine by meeting Rasul’s relatives living in the typical Lezgin villages to the northwest of Qusar. En route we drove through the sleepy streets of the main town, whose highlights were a few colourful old cottages, the leafy Nariman Narimanov Park and the quietly dilapidating old Russian military barracks called locally the ‘voenniy gorodok’ (Russian for ‘military town’). Indeed, Qusar has a surprisingly rich military history: in the 19th century it was the base of the Russian Empire’s Shirvan regiment and famously the 23-year-old Russian poet Mikhail Lermontov passed through here during his military service in 1837. Soon the town petered out into thick forest and a kilometre or so further rural houses began to appear. This signalled our arrival in the village of Aravan, which wasn’t our final destination: we’d simply come to a local distiller to fetch our next culinary surprise.

Samogon is the Russian name for a home-brewed liqueur distilled and drunk in many different ways throughout the old Russian sphere of influence. As such there’s nothing uniquely Lezgin about it beyond its obvious popularity in Qusar’s mountain villages. There samogon is made from any one of the many fruits and berries – mulberry, cornelian cherry, plum, apple, pear, raspberry – gathered in the thick forests and distilled using a rudimentary bucket and pipe apparatus. Its production, however, is a craft and the best distillers have honed their skills over many years.

Of course the main feature of this drink is its mind-boggling strength and the locals seemed to have developed a herculean tolerance for it. As we dined with Rasul’s relatives in the nearby village of Khurel later that evening the cornelian cherry liqueur left a roaring trail down the oesophogus, which was only tamed by following up with big swigs from a glass of cold ayran (also known as kambar in Lezgin cuisine) – a sour milk drink with cucumbers, coriander and dill. Another dairy product synonymous with the Lezgins is shor, a salty farmer’s cheese, which according to one old villager is the foundation of a balanced diet: Anyone raised in the mountains on a diet of shor will be strong! he insisted. 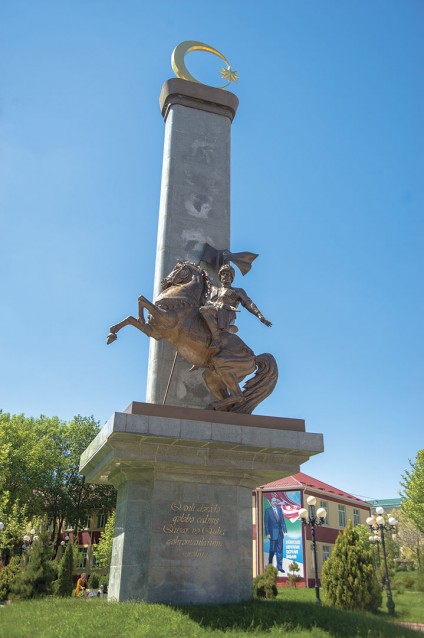 This statue of a Lezgin horseman greets visitors to Qusar

The samogon was accompanied by jovial toasts in Azerbaijani, Lezgin, Russian and English, and equally buoyant conversation. Nurmet was a retired military man with a thunderous voice and a vice-like handshake. He was also well versed in his people’s history: Of the 26 tribes in Caucasian Albania (the ancient state that existed between 4th century BC and 8th century AD), he said, 12 were Lezgin speaking. But the Lezgins had become disjointed and separated over the centuries, as the Caucasus repeatedly became the arena for geopolitical battles between great powers (including the Khazars, Mongols, Tamerlane, Persians, Ottomans and the Russians). For example, while other peoples living in northern Azerbaijan and Dagestan, such as the Khinaliqs, are often classed as distinct peoples, they’re in fact related to the Lezgins, according to Nurmet. Then when the Soviets took power in Azerbaijan in 1920 the Lezgins were split by the Samur River between Azerbaijan and Dagestan and have remained so ever since.

Yet despite this harsh history of conflict and subjugation Nurmet felt that tolerance in Azerbaijan today is actually an example for the rest of the world. As a result the Lezgins have been able to keep their language alive. The culture, however, has gradually changed. Over the course of the day it became clear that some old Lezgin ways, such as carpet weaving, horsemanship and large families living together, have been lost or are disappearing, while certain traditions remain firmly ingrained in the national culture. One of these, hospitality, we were witnessing firsthand while another – vendettas – we hoped never to experience: we couldn’t tolerate anyone offending our women, Nurmet stressed, adding that the Lezgins, like many in the Caucasus, are an impassioned, fiery people.

The following day we returned to Khurel to experience a couple more culinary curiosities. One of these was shakuka, a wonderfully sounding name also voiced with that guttural ‘k.’ Shakuka is also sometimes called Lezgin pizza, although, like chkan, it bore an uncanny resemblance to something else very familiar to me in the UK – quiche! It’s also of course cooked in the kharak, the basic preparation being as follows: first the dough is kneaded before eggs are beaten and mixed with herbs and tvorog to make the omelette-like topping. The whole thing is then returned to the kharak and cooked from above and below. Like chkan, the words ‘simple’ and ‘rustic’ above all came to mind. 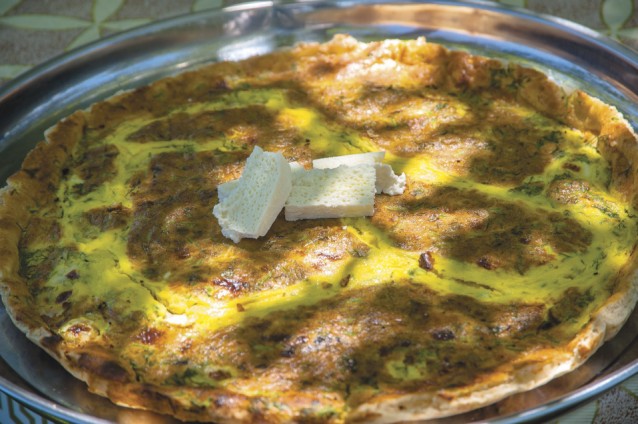 The most surprising feature of Lezgin cuisine, however, was still to come and for this I really couldn’t find any British equivalent. Qujghuz more than anything else reflected the rugged outdoor lifestyle I’ve come to associate with the Caucasus Mountains. To prepare it Rasul’s cousin neatly stripped bark from a hazelnut tree, fashioned it into a tube, filled this with alcha (which ripen in late May, early June) and sprinkled them with salt. The ends of the tube were then stuffed with hazelnut leaves and the resulting log sealed with needle-like twigs – highly primitive but absolutely ingenious! This was then heated over coals for about 10 minutes, producing soft, roasted alcha which, like tea from the samovar, were lightly infused with the aroma of the surrounding forest.

We tucked into the alcha in the shade of a sweet cherry tree, soft beams of early evening light raining through the leaves. Like others that I’d spoken to across northern Azerbaijan, Rasul’s relatives knew the local floral and fauna extremely well. They knew that blackcurrants stabilise blood pressure and nettles aid circulation. What trees do you have in the garden? I asked. That one’s apple, that’s alcha, over there is mulberry, hazelnut … pear, blackberry, cornelian cherry, came the response. From these they make compotes, juices and jams. Making honey is as popular here as anywhere else in Azerbaijan. And all of this is crucial in a tough economic climate, in which the natural riches of the forests and fields of the Caucasus Mountains allow villagers to survive. 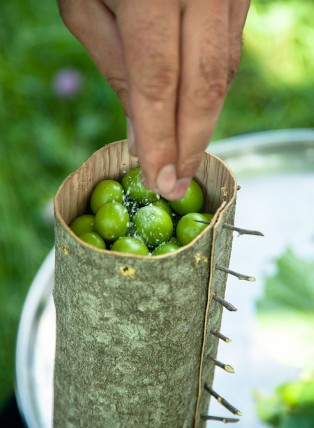 These two images illustrate how qujghuz is prepared 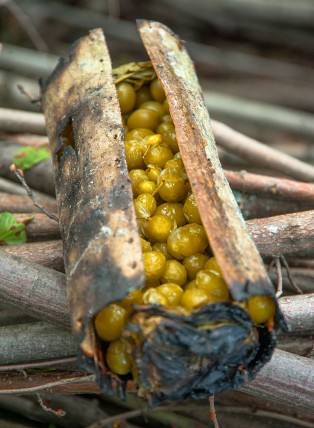 Having polished off the last roasted alcha and made an unsuccessful attempt to reach a local waterfall – heavy rains had made the muddy roads impassable – it was time to return to Qusar, where our fresh supplies of cornelian cherry juice and take-away chkan awaited. But first we made detours back through Avaran to pick up several more bottles of samogon and then to a baker in the town suburbs. It had become very hard to escape the culinary embrace of this unique corner of Azerbaijan, where rustic dishes with exotic names reflected the timeless nature and traditions of the Caucasus Mountains and its once nomadic tribes.

537780
SocietySummer 2018
Shamkir Shows its Potential Through EU Project
by Yelena Ostapenko
more
SURVEY
Which subjects are you looking for on this website?
24%Arts & Culture
12%Food
35%History
6%Sport
24%Travel & Tourism
Number of votes: 752
VIDEOS