Running over Prejudices in a Pink London Cab

A former judoka, mother of two and grandmother has proven sceptics wrong many times over: meet the only woman in Baku driving a pink London cab… 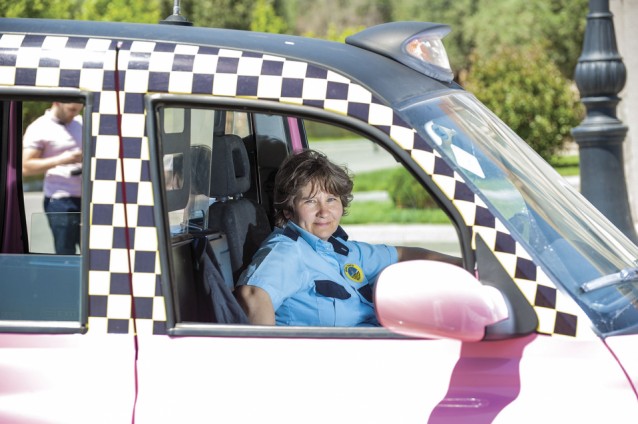 Kiosk owner Fatma Hasanzade was fed up with the continuous whining of the cab drivers that used to hang out next to her stalls about the low income they earned by driving taxis. Fatma and the men placed a bet: she would win a casket of Red Bull if she could make more profit than them by driving a taxi.

And I won that bet fair and square, says Hasanzade, 45, still smiling broadly when asked how her career started in 2012.

Five years later Hasanzade can still be seen touring the streets of Baku with her pink London taxi six days a week. She even says that she makes more money by driving her taxi than by still owning the two kiosks now maintained by her employees.

My male colleagues could also make enough money for a decent living if they spent less time drinking tea and smoking among themselves and more time behind the wheel, Hasanzade hints.

She refuses to accept the title of the only female taxi driver in Baku, since she knows that there are some other women working in the outskirts of the city. But for sure she is the only one driving a London taxi, a pink one at that.

Baku’s traffic can seem chaotic to the eyes of foreign visitors, and even native Bakuvian Fatma Hasanzade wholeheartedly endorses this assessment. However, she also emphasises that things have improved a lot since she first jumped into the driver’s seat of a London cab. The city’s roads are much better maintained and buses have begun to use marked stops instead of letting passengers hop on and off randomly.

By and large Hasanzade sees the city evolving in the right direction. According to her there are so many new restaurants and bars popping up that it’s hard to keep track of them all. In Baku, a Ferrari or Maserati, a couple of Porsches and three big SUVs as well as a fleet of rusting Ladas may stop alongside her taxi at a red light. Sometimes when it turns back to green, the only law that seems to apply is survival of the fittest: the most adventurous drivers with the biggest cars seem to come and go as they please. Hasanzade disapproves of this:

There is no way I’m letting anyone pass me just because they are driving a bigger or more expensive car.

On the other hand she doesn’t expect to receive any special treatment in the traffic just because she is a woman, and cannot recall any incident where she would have been treated differently based on her gender, for example by being allowed to go first.

However, she does recall many unforgettably absent-minded customers. Once Hasanzade picked up a mother with three kids near the Puppet Theatre on New Year’s day. While observing her customers via the rear-view mirror, she noticed that one of the children looked uneasy and was about to burst into tears. Hasanzade told the mother that she had probably put someone else’s child in the car. This turned out to be the case and the involuntary stowaway child was returned to his parents, who were still looking for their offspring. Her customer’s missing child was later found at a police station.

Hasanzade has also given a ride to a man who had just sold his house, but left all the money in her taxi. She was able to track down the customer and return the money and in return Hasanzade received a little reward and an extremely broad smile. By contrast, from a man who had left a package of gold on the backseat of her taxi, she didn’t receive any compensation for returning it through the taxi centre.

A black belt in verbal judo

With over five years of experience on the roads of Baku without any major accidents it’s fair to conclude that Fatma Hasanzade has proven her sceptics wrong. She even thinks than women in general are better drivers than men: according to her, while behind the wheel women just concentrate on driving whereas men tend to simultaneously be busy with other things. 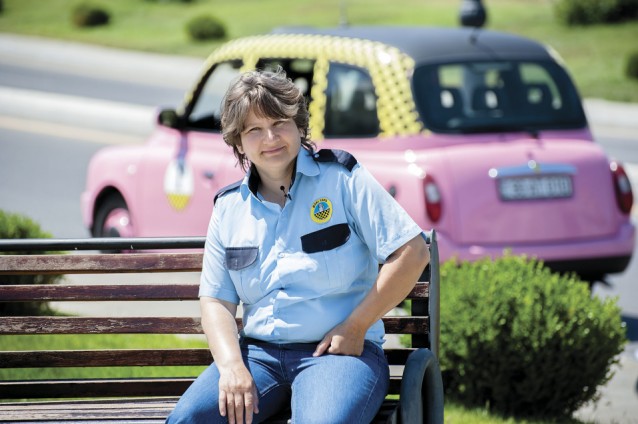 Hasanzade has two daughters and one grandchild. Asked if she would in principle allow her daughters to become taxi drivers, she has one condition: she would only let them drive London cabs where the driver and passengers are separated by glass, since some customers can behave aggressively.

It’s a global phenomenon that whenever taxi drivers gather, the air can sometimes become murky with testosterone. Baku is no exception. Hasanzade thinks she’s earned her place among the very manly band of drivers in Baku.

I get along very well with my fellow drivers, but some of them can behave badly and use abusive language towards me. But I can give back with interest, says Hasanzade and bursts into laughter.

A colleague of hers, a very experienced taxi driver in his 50’s, Tofig Qarakhanov, confirms the verbal skills of Ms Hasanzade. It turns out that the former professional judoka also has a black belt in verbal judo.

She really can defend herself. One Fatma equates to 15 men, says Qarakhanov with a smile on his face.

About the author: Pasi Nokelainen is the former editor of the official magazine of the Finnish Ministry of Foreign Affairs.

The following video was produced by Visions’ digital team…

547640
SocietySummer 2018
Shamkir Shows its Potential Through EU Project
by Yelena Ostapenko
more
SURVEY
Which subjects are you looking for on this website?
24%Arts & Culture
12%Food
35%History
6%Sport
24%Travel & Tourism
Number of votes: 755
VIDEOS