Regular readers will know of Visions’ fascination with the world of Azerbaijani carpets and our desire to ensure that the creators of these domestic artistic treasures are given due credit in the world at large (eg. see Taken for a Carpet Ride, Autumn 2016 issue). Imagine our delight when we heard of a project to support the craft across the country.

Azerkhalcha (xalça = carpet) began life as a decree from President Ilham Aliyev on 5 May 2016. Weaving through the corridors of power, the decree made its first public appearance on 12 November when the president officially opened Azerkhalcha’s Fuzuli branch in Horadiz. Nine more branches are scheduled to follow over the next two years, in Aghdam, Tovuz, Aghstafa, Qazakh, Shamkir, Quba, Ismayilli, Sheki, and Qabala, but Azerkhalcha’s choice of location for its first branch seemed to us an especially poignant decision.

The city of Horadiz is in the southwest of Azerbaijan’s unoccupied territory. It’s in the Fuzuli region, much of which remains ruined and desolate under Armenian occupation, and just a few kilometres from Jojug Marjanli village, which was recently re-opened for habitation after being removed from the line of fire in skirmishes in April last year (more on that in a future issue).

Thus it’s fitting that of the nine schools of Azerbaijani carpet, the Horadiz branch is dedicated to producing the Karabakh variety. 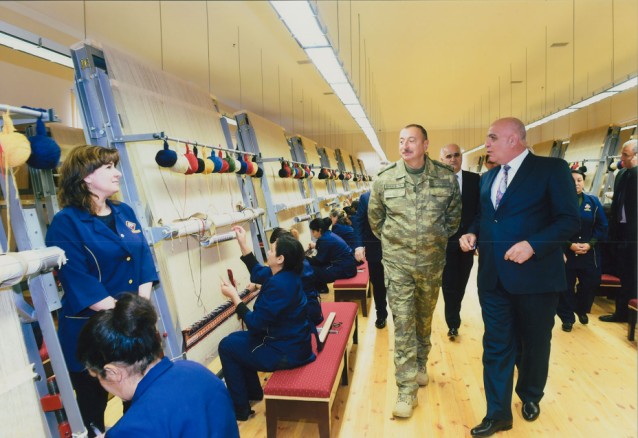 We wanted to see the branch in action and find out what effect it’s had on a region we hadn’t visited before. But first the basics. We contacted Prof. Vidadi Muradov, the country’s foremost practical expert in carpets and head of this new nationwide enterprise; he told us:

Note that no branch is scheduled to open in Baku. The enterprise is part of the government’s project to boost employment and social conditions in the regions. And Baku already has the Azer-Ilme company, previously developed by Vidadi muellim to:

Thriving for 23 years now, that company was only part of Prof. Muradov’s work. He also heads the Carpet Studies sector at the Institute of Archaeology and Ethnography and is editor-in-chief of the journal Azerbaijani Carpets. We noted the mention of international trade in both sets of aims; he points to his background as an economist, and tells us: Carpet trading is one of the main activities that stimulate carpet weaving.

The magic of these carpets, he believes, is in the sheer range of artistic and technical attributes. Azerkhalcha already has 200 traditional designs sketched out for the weavers. How is it that there are nine schools of carpet within the relatively small area of Azerbaijani habitation?

One of the main reasons why our carpets are so diverse is the individual approach of every tribe settled here towards carpet weaving, their particular ornamentation, imbuing the elements on the carpets with colours to their own taste, and keeping them alive as a tradition. 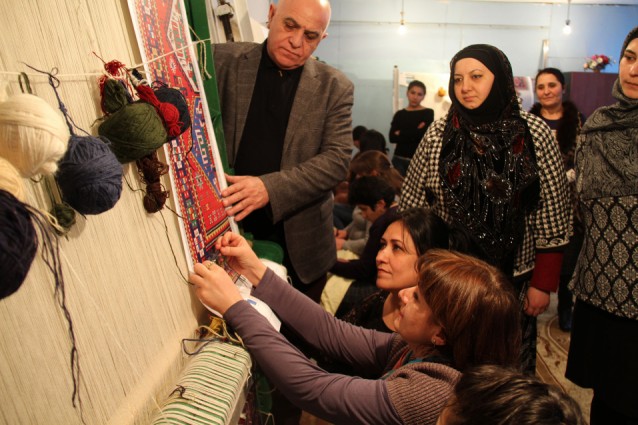 That tradition, however, came under severe stress during Soviet rule.

This period is remembered as one of duplication, moving away from traditions…. the replacement of natural dyes, one of the indicators of quality, with chemical dyes…. They paid attention neither to their quality, nor the form, nor the beauty of the carpets.

Vidadi muellim pays tribute to the post-Soviet entrepreneurs who set up workshops in Quba, Shabran, Ganja and Absheron and worked to restore their traditions. Of course, he is especially proud of Azer-Ilme’s work to process raw materials, weave and…. sell, locally and abroad, as well as restoring skills.

Hundreds of professional weavers, carpet artists, restorers have been fostered here. Now, they are working in various places.

His enthusiasm for the new project is evident as he lists the statistics for Horadiz: 150 weavers (most previously unemployed) from Fuzuli villages, 60 different carpets of various sizes being woven on 43 looms. He looks forward to 150 more local people getting weaving in Shamkir, and the other branches being in operation by the end of 2017.

Already, well over 1,000 people have been trained by highly experienced carpet weavers

Further plans for Azerkhalcha are nothing if not ambitious: 10 more branches to be opened in 2018-19, and a further 10 after that, until 5,000 people are back in the business of weaving and selling these beautiful carpets from (please note Liberty, London) Azerbaijan. Already, well over 1,000 people have been trained by highly experienced carpet weavers,

It’s important to mention that there are enough people in every region of our republic who wish to work in carpet weaving.

It doesn’t stop there. This expansion of production naturally (operative word) needs the raw materials.

Together with the Ministry of Economy, work is underway to establish a Spinning and Dyeing plant by the end of 2018 at the Sumgayit Industrial Park.… From this May to next, it is planned to collect 1,000 tonnes of wool from 52 regions. In addition to the seasonal wool and plant suppliers, there will be 70 permanent staff at the plant.

We have already presented our initial production as “Made in Azerbaijan” in January at the DOMOTEX international exhibition in Hanover, Germany. Once again we saw the interest and attention paid to high quality Azerbaijani carpets.

Next up is the New York International Carpet Show in September. 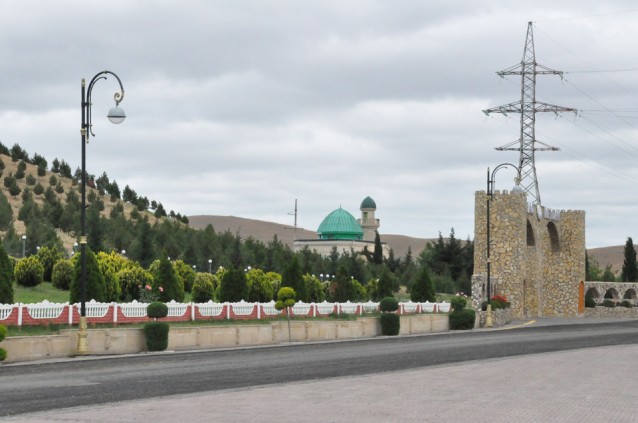 Armed with the ideas and the plans, we set off for Horadiz to check the reality.

As we were heading into previously unexplored (by us) territory, the five-hour journey south-west was one of anticipation, even through the flat centre of the country. And, to be honest, we were favourably surprised by the destination – but we’re here to talk about Azerkhalcha, so if we may, we’ll leave the geographical impressions for a later blog on www.visions.az.

We were met at the gates (arch) to the city and guided in by Namiq Mammadov, who oversees operations at the Horadiz branch. There’s obviously been considerable redevelopment of the once-occupied city, and the carpet workshop was impressively modern and well-equipped. The biggest impression was made by the sight, and implications, of some 70 women in smartly functional workwear sitting in twos and threes at 40 looms, weaving Karabakh carpets.

In the context, the circumstances and the history, it was awe-inspiring

Namiq gave us some of the brief history, we looked at the working patterns on the walls and walked around to get a glimpse of pattern being given life. In the context, the circumstances and the history, it was awe-inspiring.

We wanted a random interview and seeing a pattern on the wall described as being associated with Jamilli village near Khojaly, we asked to speak to someone working on that pattern. Namiq took us over to a bench on which two women were working on the Khojaly carpet. Shukufa Mammadova, born in 1968, agreed to talk to us.

Living in the village of Boyuk Behmendi, not far from the city, she told us she’d been a housewife until she joined Azerkhalcha at its outset in November 2016. It hadn’t taken her so long to pick up the training as she’d learned the art of weaving from her mother and grandmother and knew Karabakh carpet designs. We asked what it meant to her to be working there:

While I am working I think it’s a fairy tale. Weaving these difficult patterns makes me a woman who can overcome all of life’s problems because, you know, to create these patterns is very hard…. It needs a lot of concentration.

As for what difference opening Azerkhalcha had made to life in Horadiz, she was equally enthusiastic:

I am very grateful to whoever decided to open this place, because the women in this area were sitting at home and now they can work here. But also, we are very grateful that we can show Karabakh carpets to the world and to continue the tradition of weaving these carpets. Then, my son was killed in the fighting, in Terter [2009], so I am a bereaved mother….

I don’t have a favourite, every Karabakh carpet has its own beauty.

In addition to losing her son to the fighting, she told us that, like other local people, she’d had to flee Horadiz in 1993 (she went to Kurdamir) as Armenians attacked and took the area. She returned in 1994, after nine months, when the invaders had been driven back.

Seeking the views of someone from the younger generation, we interrupted 21-year-old Roya Abbasova’s work on a different loom, to find out that she was born in the city and had also been in at the start of the project. With no previous experience of carpet weaving, this was her first job. She’d needed the full two months’ training, finding it difficult at first,

…. but as we learned and saw what we had made, it became easier. 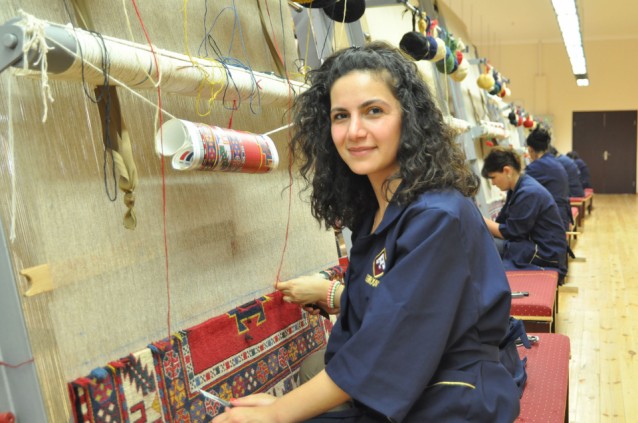 For Roya the benefits of the job were similar to those appreciated by Shukufa khanim:

The first thing was the knowledge; we learned about the carpets and how to weave them. Secondly, we are very young but we can help the family…. I am very thankful, because many women work here, and that is very good for the region.

But she did have a favourite:

Before this one, we worked on a Chelebi carpet; I liked the patterns on that one.

We turned back to the very helpful Namiq. Just 30 and originally a schoolteacher of German, he’d already had experience of working with the local executive authority before being appointed to oversee the work of Fuzuli Azerkhalcha. To our question about why he’d wanted the position his response was familiarly enthusiastic about engagement with the traditions:

This is my dream job. All its criteria suit me. First of all, the history of Azerbaijan, its ancient customs are preserved here, that’s why I’m keen on this job. This is the main reason.

This theme continued as he talked about recruiting weavers:

After the president’s decree launched the company we only had to do a little publicity. It was not so difficult, because the potential is here in this region. We inherited this craft from our mothers and grandmothers, we just needed to continue it. Most of the employees we hired were familiar with the craft within their families when they started here.

The training programme was for two months, but many spent only a short part of it in study because they picked it up quickly and began weaving early.

Interview over he ushered us outside, keen, he said, to take us to a late lunch at a restaurant. Following his car, we were a little concerned that he’d missed a turn as we left the restaurant behind. We really shouldn’t have been surprised when we drove into the yard of a house in Boyuk Behmendi – his home. We sat down as the table was laid and listened to the family tales told by his mother and father. Hospitality is clearly as strong a tradition in Fuzuli as the weaving of carpets. 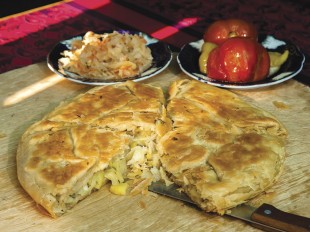