Under One Sun: Azerbaijan at the Venice Biennale

[Editor’s note: The following post is dedicated to Dr Martin Roth, former director of London’s Victoria and Albert Museum and co-curator of the Azerbaijan pavilion at the Venice Biennale 2017, who sadly passed away on 6 August at the age of 62. Visions is deeply grateful for the attention he afforded our questions at what must have been a very difficult time.]

Shortly after the opening of the latest edition of the world’s premier art festival, Visions managed to speak to the curators of the Azerbaijan Pavilion: Dr Martin Roth, the former director of London’s Victoria and Albert Museum and Emin Mammadov, Artistic Advisor at the Heydar Aliyev Foundation and the Heydar Aliyev Centre… 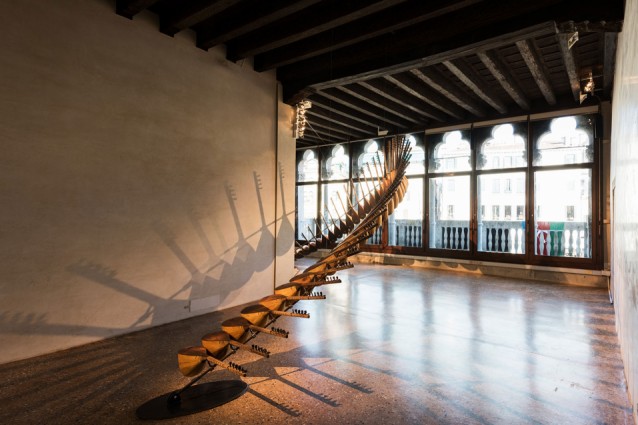 The installation Under One Sun by Elvin Nabizade is formed of 44 saz instruments arching the journey of the sun from dawn to dusk. Photo: Javid Guliyev

The history of the Venice Biennale stretches back to the late 19th century when the first exhibition was held in 1895. Since then, excluding breaks during the two world wars, the Biennale has been held every two years and today it brings together the most significant achievements across the artistic world, each time under a new theme. The festival’s 57th iteration, curated by Christine Macel under the banner Viva Arte Viva! or Long Live Art!,  opened on 13 May and runs until 26 November 2017.

The event’s chief organiser, Paolo Baratta, President of La Biennale di Venezia, described this year’s exhibition as dedicated to celebrating, and almost giving thanks for, the very existence of art and artists, whose worlds expand our perspective and the space of our existence. Meanwhile its curator, Ms Macel, wrote that Viva Arte Viva is an exclamation, a passionate outcry for art and the state of the artist, emphasising the crucial role of artists as guardians of humanity in a world she calls shaken by conflicts, wars, and increasing inequality.

Indeed since the latest edition in 2015 Europe has witnessed its worst migrant crisis since the Second World War, conflicts continue to flare in Syria and Ukraine and in Europe major cities – Paris, Brussels, Nice, St Petersburg and most recently Manchester and London – have been hit by Islamic State-sponsored terrorist attacks. Unsurprisingly, borders have tightened and populism is on the rise.

In this context Azerbaijan’s contribution this year is timely to say the least. Under One Sun, its latest offering at the Biennale, addresses the challenges of harmonious co-existence through the work of young Azerbaijani artists, and presents the country’s unique cultural and ethnic diversity as an exemplary model. The exhibition is on display at the Azerbaijan pavilion, one of 86 national pavilions that accompany the nine pavilions forming the main exhibition, designed, according to Ms Macel, to flow together like the chapters of a book.

This exhibition is a reminder of the importance of growing together, recognizing commonality and shared humanity and harnessing the power of art for the promotion of peaceful resolutions to ongoing conflicts, Dr Roth said recently of the Azerbaijani concept.

Elaborating on the theme, Mr Mammadov, who was born and raised in Baku and has curated several major exhibitions of Azerbaijani art over recent years, not least the Azerbaijan pavilion at the 2015 Biennale, elaborated: We’re talking about the centuries-old positive experience of Azerbaijan, wherein people of different backgrounds and cultural diversity, practising different religions and speaking different languages, remember their ancestors’ traditions of living side by side, being good neighbours, honouring their culture and loving their land, their motherland: Azerbaijan. It can provide a useful example in the context of world processes where more and more people have begun to outline borders, erect insuperable walls and are becoming fenced off from each other.

As Mr Mammadov suggested, Azerbaijan is home to a smorgasbord of ethnic minorities who, living alongside the majority Azerbaijani population, are dotted all around the country - from the Talysh in the south to the Avars, Ingiloys and Lezgins of the north, the Tats of the Absheron peninsula and many more besides, including Udins, Tsakhurs, Molokans and Mountains Jews.

The most important fact is that people don’t know that Azerbaijan is such a multi-ethnic and multi-religious country, continued Dr Roth.

Communities from different cultures manage to live together in a very peaceful way. Of course, the existing Armenian-Azerbaijan Nagorno-Karabakh conflict remains, so it is important to be cautious about what is said [...] One part of this exhibition is to show how this cohabitation functions in a multi-ethnic country, notably during very difficult times. With all that is happening in the world today, for example in the US where there is so much prejudice, it is especially important to show this contrast. 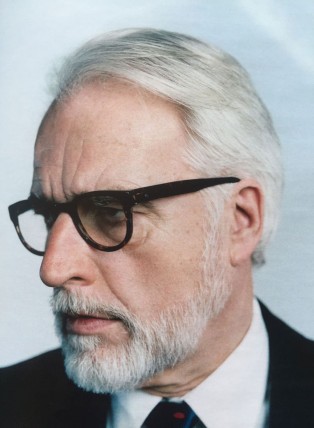 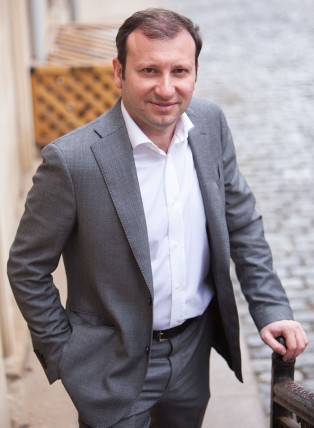 From Dresden to Venice

The origins of Under the Sun date back to 2008 and the Azerbaijan Culture Days in Dresden where Dr Roth and Mr Mammadov first met and soon after came up with the idea of a joint project on tolerance. Explaining his involvement in this year’s Azerbaijani pavilion, Dr Roth noted too the profound influence of another Azerbaijani curator, Leyla Akhundzadeh, who tragically died in a road accident in 2010:

During that time I was the Director General of the Staatliche Kunstsammlungen Dresden for which she curated the exhibition “Step of Time.” Leyla taught us so many things about the contemporary art scene in Azerbaijan throughout that period. She curated the Azerbaijan pavilion for the Venice Biennale in 2007, a task that has now been entrusted to me. Therefore this task is immensely important to me on a personal level and I wish to dedicate the work I have done for this year’s pavilion to her.

Chosen to represent Azerbaijan this year were the visual performance group HYPNOTICA, the only Azerbaijani collective to date to have successfully used video-mapping, and young artist Elvin Nabizade, whose work explores identity and folklore through elaborate installations of Caucasian musical instrumentals.

This year we have presented young artists who are taking their first steps in professional art, explained Mr Mammadov, continuing: They are young people whose artistic language integrates popular media within modern art. Video-mapping, installations, animation and readymade art were selected to reveal this difficult and many-sided subject.

Nabizade’s two installations on the pavilion’s second floor highlight music as a form of communication across language barriers. One installation features a complex web of diverse, intertwining folk instruments forming a harmonious sphere while the other focuses exclusively on the saz; 44 instruments form an arch that symbolises the journey of the sun from dawn to dusk. He uses this instrument, well known in the Caucasus region, and the power of its music and art to create a whole new concept, explained Mr Mammadov.

Near the pavilion’s entrance is HYPNOTICA’s contribution – an interactive video-mapping installation entitled Unity in which 20 monitors display interviews with Azerbaijanis of different ethnicities speaking in their distinctive national languages. These then merge together across the screens in a giant flow of faces and words, alluding to the country’s human and linguistic diversity.

What I enjoy is the combination of the artistic styles of these two artists, said Dr Roth, adding: I find it fascinating to see how traditional cultures can be brought into connection with modern, contemporary and digital art. This relation is presented in a very brilliant way through the artists’ works. 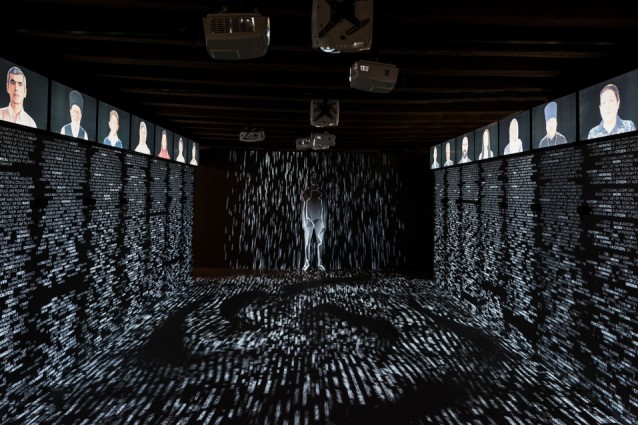 The installation Unity by HYPNOTICA, which features 20 Azerbaijanis of different ethnicities sharing their culture and traditions. Photo: Ugo Cameni

Azerbaijan’s regular participation at the Venice Biennale (the country first took part in 2007) is part of an overarching trend to promote the country through culture and sport. In between hosting the European Games, Chess Olympiad, Formula 1s and May’s Islamic Solidarity Games, Baku’s cultural scene has also evolved over the last five to 10 years. Symbolic of this, believed Mr Mammadov, is the Heydar Aliyev Centre, which he described as a unique art object in itself, besides holding recent exhibitions of leading international artists such as Andy Warhol, Tony Cragg and Henri Cartier-Bresson.

There are so many young artists in the country, many are yet unknown, and it is necessary to open the doors for them.

In the context of this cultural renaissance, he stressed the role of the Heydar Aliyev Foundation and its president, First Lady Mehriban Aliyeva, in sponsoring cultural projects and striving to promote Azerbaijani art abroad through recent exhibitions such as Fly to Baku: Contemporary Art from Azerbaijan, the cultural Days of Azerbaijan in France, the international Maiden Tower art festival and the Music in Stone international sculpture symposium.

Since his previous introduction to Azerbaijani art in Dresden in 2008, Dr Roth had also witnessed this evolution; we leave the last word with him: It is impressive to see how much has happened in the country in terms of culture. It is noticeable that art galleries, art collectors and art education support the arts and the creative industry and there are many positive developments that encourage this further.

[...] There are so many young artists in the country, many are yet unknown, and it is necessary to open the doors for them.


For more information on the Azerbaijan Pavilion, its artists and curators, go to: www.azerbaijanvenicebiennale.com