Baku Gears Up for the Azerbaijan Grand Prix

From 23-25 June Baku hosts the 2017 Formula 1 Azerbaijan Grand Prix, the second race of a ten-year contract between Azerbaijan and Formula One Management. Visions recently caught up with Arif Rahimov, Executive Director of race promoter Baku City Circuit, to find out how the event was received last year and what to expect next weekend.

VoA – How do you feel the Grand Prix of Europe went last year?

AR – Overall it went well, we did a good job. It was appreciated by a lot of stakeholders, by all the media at the race – that’s the race media so they can differentiate one race from another really well and they know when a race is well prepared or when it’s not. The same with the drivers, they really enjoyed the track, from the perspective of motorsports. They liked its actual layout and the complexity of it. It was a big surprise for them because many of them didn’t know what to expect, they didn’t have the proper training as they train on simulators and the simulators that were given to them before the race were very rough, they didn’t really show all the elevations and the world around the track, it was just a configuration of the circuit.

At the same time we did a lot of surveys with spectators, we have a very high percentage of positive responses, so from the perspective of satisfying different stakeholders it was a great race. Obviously we had some small issues internally because this was the first prototype so there were just minor things that we’re trying to smooth out for this year, it’s nothing major. 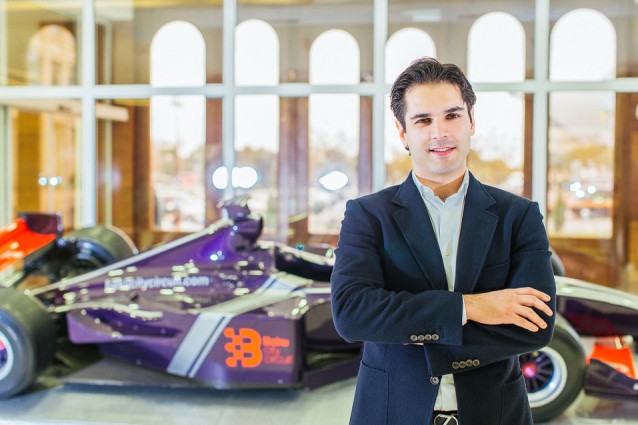 Have you changed anything for this year?

Well it’s not on the visible side, I mean we’ve changed the management structure within the company slightly, we’ve changed some procedures to maybe sometimes simplify them, sometimes make them a bit more logical and to adapt them to the real world, because last year it was just theory, theory, theory and then we were hit with practice and obviously in the real world it’s slightly different to when you just plan it without having done this before.

Have there been any changes to the track at all?

No, it’s exactly the same. There are some modifications of the safety security systems such as the Techpro barriers, we’ve added one layer or two, we’ve extended the run-off areas on some of the turns but the actual layout of the circuit is exactly the same.

I think this year there’s going to be a lot more to see on the track, with a bit more action.

Last year many were predicting quite a lot of drama because of the tight corners, narrow sections and novelty of the circuit. Why do think it turned out to be uneventful?

There was always big potential for having a lot of crashes, for having a lot of overtaking and drama like you said and that was shown by the GP2 race that we had the same weekend. That was a support race and we’re hosting it again this year, it’s now called Formula 2. This race has shown that it can be whatever you can imagine basically – overtaking, crashes, everything. 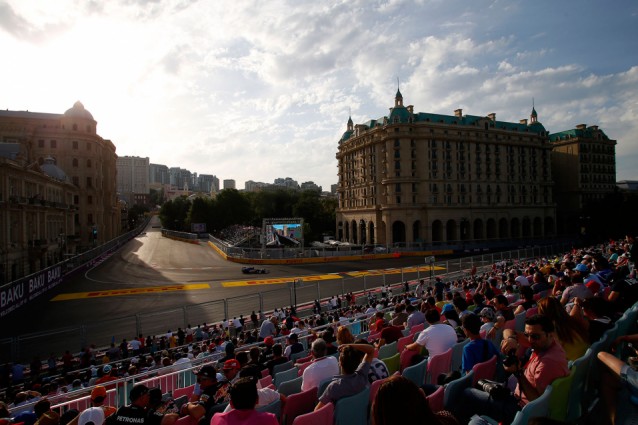 Azneft Square during last year’s race. Photo: courtesy of Baku City Circuit
With Formula 1 historically the drivers are more mature than the ones in Formula 2, obviously because they’re older, they’re more at risk and they really want to score their points and they prefer not to risk sometimes. Especially when it’s the first race and they’re not familiar with the track. I think that was the main reason why we had no real action – the attitude of the drivers was just to familiarise themselves with the track.I think this year there’s going to be a lot more to see on the track, with a bit more action.

Why has the name of the race changed this year from the Grand Prix of Europe to the Azerbaijan Grand Prix?

We wanted to do the first year showing that it was basically a stage in the history of Azerbaijan when it comes to sporting events, during which we did all of those European Championships: we did the European Games last year (in 2015 – Ed.), we hosted Eurovision which is a big European event as well. So we thought it would be good to show the world that we are a European nation and the name was vacant so we asked Formula 1 if we could use it, which was accepted, so we used the “Grand Prix of Europe” for last year.
It did its job for last year, people knew one of the key messages which is that Azerbaijan is between Europe and Asia, it’s on the border of the two, but for this year we wanted to stress that this European nation is Azerbaijan and that’s where you should go.

it’s the fastest street circuit on the calendar: last year we had the top speed record on our track

What do you think makes the Azerbaijan Grand Prix unique from the other races on the Formula 1 calendar?

Well every street race is unique. There aren’t that many street races on the F1 calendar, there’s just Monaco, Singapore and Baku, which are the true street races. You have a mixture of street and circuit racing, something like Sochi, Abu Dhabi, maybe Melbourne and Canada. But the true city racing is Baku, Monaco and Singapore, so when it comes to the streets it’s the uniqueness of every city alone that makes the race unique.

It’s a very dangerous race, it’s a very old style race, like one of the drivers told me actually – this is really, really old school racing where you have a lot of risks, where the walls are so close to the verge of the track so there isn’t much space for a mistake, you have to really drive very precisely. At the same time it’s the fastest street circuit on the calendar: last year we had the top speed record on our track, which was 378km/h, which is the ultimate all-time [top] speed record (set by Valtteri Bottas of Mercedes – Ed.). On top of that we had – it was a coincidence and nothing to do with our track – the fastest tire change, the fastest pit stop, from Williams. It was 1.92 seconds or something like that, ridiculously fast. So that was the all time fastest pit stop.

There are three circuits that are usually slow. You have Monaco, which is the slowest race, you have Singapore which is really quite slow as well and then you have Baku which is fast but it’s a street circuit. 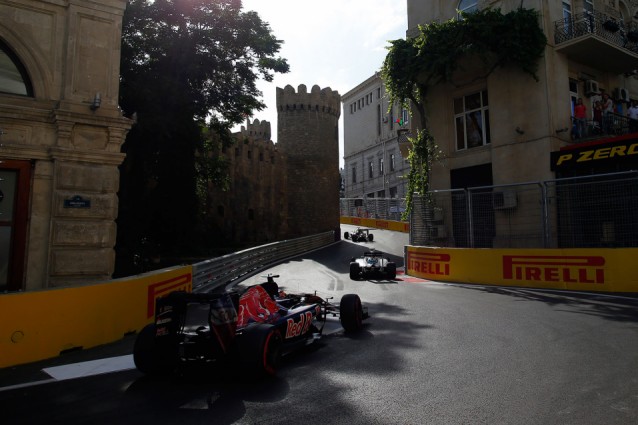 Drivers negotiate the narrow section along the Old City walls, the hardest part of the track, at last year’s race. Photo: courtesy of Baku City Circuit

How important is the Formula 1 in the general promotion of Azerbaijan abroad?

Formula 1 is watched by around 500 million people every year – who watch at least one race within the season – and that’s a big number. It’s the third biggest sports [event] to promote the country. The first two are the Olympic Games and the Football World Cup and then the third is Formula 1 World Championship. And it’s very global. It’s not local, it’s not European, it’s not Asian; it’s global, it’s everywhere, it’s in Australia, it’s in the US, Europe, Asia, everywhere, so that was a very good choice from the leadership of the country on how to promote the country and get us forward. And actually it has done quite a good job, I mean now we can see there is a huge inflow of tourists and the recognition of the country through Formula 1 is just unimaginable.

In the context of this year’s Formula 1 championship, what are the main driver and team battles that might be significant at the Azerbaijan Grand Prix?

Last year it was just Mercedes, no other team practically stood a chance of winning anything. This year we can see a really, really good battle between Mercedes and Ferrari, we can see that Sebastian Vettel and Lewis Hamilton keep going in front of one another and I think that’s great because it attracts more interest.

There are other smaller battles between other teams, between the rest of the teams like Red Bull, Sahara Force India, Williams are picking up, but yeah the main battle is the Mercedes/Ferrari one. 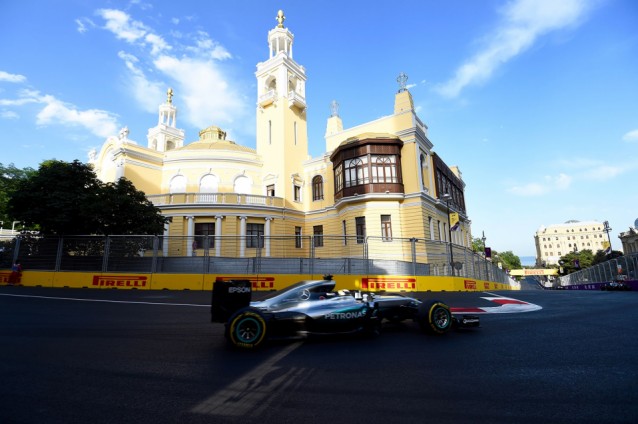 What cultural events are happening alongside the Formula 1 this year?

We’re having three concerts with international stars: we have Tarkan on Friday [23 June] on the Boulevard Main stage, we have The Black Eyed Peas and Nicole Sherzinger on the Saturday and Mariah Carey on the Sunday. And then obviously the whole Boulevard turns into a huge fanfare. We have plenty of entertainment for grown-ups, for kids, for everyone on the Boulevard.

We’ve added a couple more small zones in Sahil Park and Sabir Park. The zone in Sabir Park is more like a cultural zone. We’re doing it together with the Ministry of Tourism and Culture and the National Bureau on Tourism Promotion, so we’re expanding the entertainment throughout the weekend.