BTC- A tale of three seas 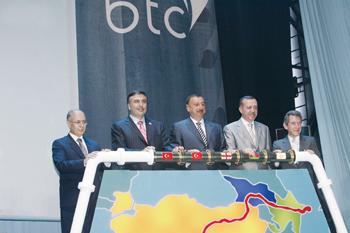 The Baku-Tbilisi-Ceyhan project, or BTC, is a three billion-dollar investment to unlock a vast store of energy from the Caspian Sea by providing a new crude oil pipeline from Azerbaijan, through Georgia, to Turkey for onward delivery to world markets.
Traversing 1,768km of often remote and challenging terrain, the BTC pipeline is able to transport up to one million barrels of crude oil per day from a cluster of discoveries in the Caspian Sea, known collectively as the Azeri, Chirag, and deepwater Guneshli (ACG) field. By creating the first direct pipeline link between the landlocked Caspian Sea and the Mediterranean, the BTC project will bring positive economic advantage to the region and avoid increasing oil traffic through the Black Sea and vulnerable Turkish Straits. A programme of social and environmental investment is ensuring that the peoples of the three host nations also share in the benefits.

Linefill of the BTC pipeline began at the Sangachal oil terminal in Azerbaijan on 10 May 2005 and the first export of oil from the Ceyhan marine terminal in Turkey commenced on 28 May 2006. BTC was officially inaugurated on 13 June 2006 with a ceremony in Ceyhan. The presidents of Azerbaijan, Turkey and Georgia took part in the celebrations. With demand for energy expected to increase 60 per cent by 2030, international interest in the BTC pipeline is high.

Nevertheless, when BTC was first mooted in 1994, many people believed that it was a dream, a fantasy. But the vision of Azerbaijan and Turkey and support of the USA confounded the critics. Some thought that the project would damage Russia’s national interests and create chaos in the region. This has also turned out to be wrong. As the US deputy assistant secretary of state, Matthew Bryza, said, BTC will replace hostility with competition, enhance collaboration among the states and be a pipeline of peace and security. Russia is already building an oil-refinery in Turkey, valued at five billion dollars, and is investing in other energy sectors. This can be seen as, at least in part, a result of BTC.

The BTC pipeline is being developed by an international consortium of 11 partners, known as the Baku-Tbilisi- Ceyhan Pipeline Company (BTC Co).

BP is the largest stakeholder in the project, and is leading the design and construction phases.
Strategic importance

Kazakh oil will also be delivered to world markets through BTC from 2007 under a contract signed by Azerbaijani President Ilham Aliyev and Kazakh President Nursultan Nazarbayev. By joining BTC, Kazakhstan gains an outlet to the Mediterranean for its oil and also strengthens regional economic and political cooperation.

Currently more than 400,000 barrels of oil per day are exported through the pipeline. This will increase to one million barrels in 2008.

BTC has great significance for the economic, political and energy security of Azerbaijan, Georgia, Turkey and the whole region.
Contract of the Century

Azerbaijan was the first country to attract leading western oil companies to the Caspian region. In 1994 the first contract on prospecting and developing the Azeri-Chirag and deep-water Guneshli oil fields in the Azerbaijani sector of the Caspian was signed between SOCAR (State Oil Company of Azerbaijan) and foreign oil companies (BP, Amoco, Exxon, LUKoil and others). The project, carried out under Azerbaijani national leader Heydar Aliyev’s guidance, was called the Contract of the Century. The Azerbaijan International Operating Company was established to implement the project. 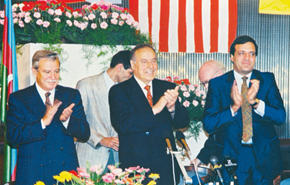 Signing the Contract of the Century
Turkey aims to use its location to become a viable energy corridor between producer and consumer countries. It is building Ceyhan into a regional energy hub, with BTC a key part of the project. After 2010 the Ceyhan terminal will be receiving oil from Iraq, Azerbaijan, Russia and Kazakhstan and supplying oil of different quality to a range of tanker sizes. The creation of an energy market at the terminal is an essential part of Europe’s energy security.

World energy consumption will rise by 60 per cent by 2030. This enhances the importance of BTC, which will be carrying one million barrels of oil per day or 50 million tonnes per year. Demand for natural gas in EU countries is expected to increase 70-80 per cent. Gas from Azerbaijan’s Shah Deniz field will help to meet this demand. A pipeline from the Caspian to the Turkish city of Erzurum is to be put into operation at the end of 2006 and will bring Caspian gas to the Turkish market.

World history shows that oil does not always bring prosperity to producer nations. Instead it can be a catalyst for social injustice and other problems. For example, per capita annual revenue does not exceed 1,000 dollars in Nigeria and Venezuela, rich oil exporters, but it is 25,000 dollars in Norway, which produces no more oil than they do. This means that the right use of oil revenue and, in particular, strengthening the non-oil sector have a major impact on the prosperity of a nation. The Azerbaijani government says it is paying great attention to this issue and has made the use of oil revenues to develop the non-oil sector a priority of its economic policy.

Azerbaijan is a new, independent and developing country. World experience shows that a massive inflow of oil revenues into an economy can be damaging. A developing economy simply cannot "digest" the funds. Oil revenues therefore need to be managed. Azerbaijan has set up a State Oil Fund with the express purpose of using natural resource revenue to benefit future generations. The fund was set up at Heydar Aliyev’s initiative.

These major projects being carried out in Azerbaijan mean energy independence for Azerbaijan and contribute to the world’s energy security. A planned pipeline across the Caspian will supply Kazakh oil to BTC while another pipeline will bring Turkmen gas to the Baku-Tbilisi- Erzurum pipeline. Azerbaijan, Georgia and Turkey will earn 10 billion dollars per year as transit countries, a major boost to their economies.

BTC is no longer a fantasy. It is reality. The project will help both the economy and peace and social stability in the region.
Heydar Aliyev on BTC

Azerbaijan’s national leader, Heydar Aliyev, said about BTC:
"The decision was widely discussed. There were people, who were against the contract, which we signed, and the oil transportation route via Baku-Tbilisi- Ceyhan. It is obvious. They were against us; obstacles were made firstly for Azerbaijan. Because the oil belongs to us and it is first of all our right to determine the export route for the oil. We were put under a great deal of pressure. The socio-political situation was not so stable at that time. Civil war had happened here in 1993. We overcame all this and signed the contract. But when we signed the contract there were people even in high positions among us, who served foreign organizations and spoke against the contract.

"The reason for all this pressure on us was that they did not want to see the contract we had signed being implemented – but we did it first in the Caspian Sea.

Secondly, they were against the construction of Baku-Tbilisi- Ceyhan. This was the situation in which we launched the project, but we used our determination and continued on our way."

The diameter is 42 inches in Azerbaijan, 46 inches in Georgia and 34 inches in Turkey

The pipeline´s wall varies in thickness from 8.74 to 23.8 millimetres

It takes 10 days for one million barrels of oil to reach the end of the pipeline. The pipeline can carry 50 million tonnes of oil per year.
220,000 pipes have been cemented and two million pipe-raising operations have been carried out

The pipeline crosses more than 1,500 rivers and 13 seismic zones

The route will be in operation for 40 years

Total expenditure on construction is below four billion dollars.

Total financial investment in the project is 2.6 billion dollars. The investors are:

22,000 people worked on the pipeline when construction was at its height, 70-80% of them local citizens

850 people have permanent jobs operating and maintaining the pipeline

450 communities (about 750,000 people) have been registered in the direct impact area on both sides of the pipeline. Approximately 100,000 landowners have been affected directly

By 2003 approximately 133 million dollars had been paid to landowners, not including taxes, government payments and legal expenses

The Community Investment Programme has spent 25 million dollars, with 500 communities receiving benefits (115 of them Azerbaijani). Spending began in July 2003 and will continue till the end of 2006.

Five million dollars have been spent on archaeological investigation.