The global economy hinges on the economies of the US, the European Union, China, Japan and developing countries, and the balance created by the interaction and links between them. However, the US economy plays the role of the central pillar. So when there is a decline in the US, it creates a serious crisis in the global economy, and when growth becomes too high the difficulties begin to reappear.

When the US economy faced decline last time in 2008-2009, the global financial and economic crisis appeared. Over the following years, this tense situation in the American economy decreased gradually and presently the US economy is on the rise. However, when there is economic growth there, the US dollar becomes stronger and in global terms this causes a range of strategic commodity prices to fall, beginning with crude oil and other energy resources.

Recent years have seen great developments in the non-oil sector

The cheapening of these products negatively affects the situation in countries like Azerbaijan whose income depends on them. As a result of attracting foreign investments into the oil and gas sector at the end of the last century, the Azerbaijani economy has inevitably developed in one direction. Currently there are 4.8 million employable people in the country and of them about 80,000 work in the petroleum sector.

Since the summer of 2014, Azerbaijan has therefore suffered from the drop in oil prices and, since state income is largely generated from the sale of crude oil, this has decreased fourfold. However, unlike many other oil-producing countries, microeconomic stability in Azerbaijan has been maintained and currency reserves have not suffered a serious loss.

Was Azerbaijan ready for such a situation? Even if global market prices for energy resources had not fallen, it was clear that the country would have entered a post-oil period at some point in the future. Simply, this was expected a few years later. The drop in crude oil prices globally has accelerated the transition.

However, it has been possible to significantly soften the blow of the fall in oil prices, as the government of Azerbaijan has remained committed to the development of the economy in a balanced, diversified and sustainable way. Back on 29 December 2012, President Ilham Aliyev signed a decree approving the Azerbaijan 2020: Look into the Future development concept, which set concrete goals for the development of the non-oil sector, to be supported by various state programmes. 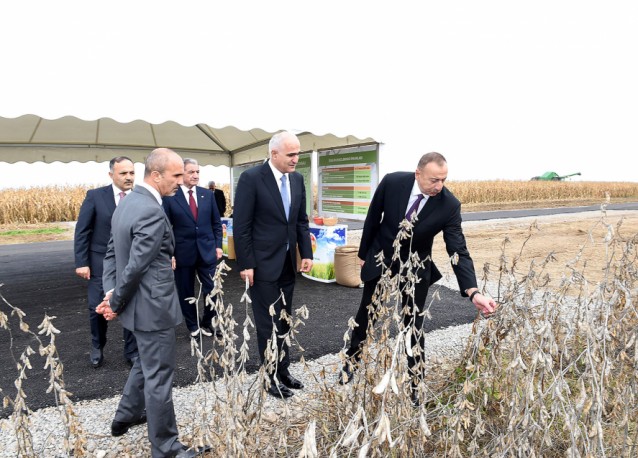 Recent years have seen great developments in the non-oil sector, the main driving force of the economy. Its share in the country’s gross domestic product (GDP) has begun to prevail and the production of competitive and exportable products has increased. For example, in 2016, 65.7 per cent of GDP was produced in the non-oil sector and 34.3 per cent from oil and gas. The environment for entrepreurship has also improved, investments have increased and new enterprises and jobs created. However, despite the increase in the non-oil sector’s share in GDP, exports of non-oil products remain low.

All eyes on export

Thus, because of the fall in the global price of oil and the general, gradual decrease on oil production in the country, moving to a new model of economic development has become an urgent issue. Recent activities to expand the export of non-oil products produced in the country have accelerated and become a serious state policy, supported by a range of decrees signed by the President.

First among these was the presidential decree signed on 18 January 2016 and called On additional measures for the stimulation of the export of non-oil products. This wide-ranging decree provides for the following: reimbursements on the export of agricultural and processed products; establishing export missions in foreign countries; studying foreign markets; promotion of the brand “Made in Azerbaijan”; provision of certificates and patents for local companies exporting abroad; and other export-related legislation, development projects and programmes financed by the state.

On 1 March 2016, a complementary document - On additional measures related to the promotion of export of non-oil products - was signed as well. With this document it was determined that a certain part of customs duties paid to export non-oil products produced between 2016 and 2020 will be reimbursed to the manufacturer from the state budget.

However, especially important was the presidential decree On the establishment of a unique database of products produced in the country signed on 21 September 2016. Following this the Centre for Analysis of Economic Reforms and Communication was tasked with creating a platform within three months to represent products of Azerbaijani origin and put them forward for sale in domestic and foreign markets. 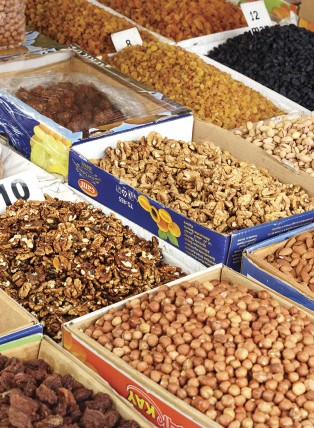 Dried fruits and nuts at the bazaar in Sheki. Elena Mirage/Shutterstock.com 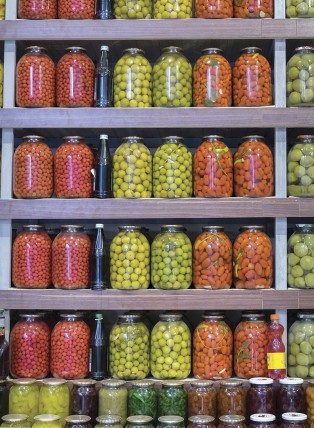 Within the allotted time limit, this body created the azexport.az website, which gives information about Azerbaijani goods and their producers in three languages (Azerbaijani, English and Russian). It is connected with the leading domestic and international logistics companies and payment systems, and is continuously updated and user-friendly. Since its launch on 20 December last year, azexport.az has been fulfilling its purpose of making “Made in Azerbaijan” products available all over the world. A “digital trade hub” section will also be added to simplify contract, certficate and customs procedures between local exporters and foreign entrepreneurs, meaning that the latter will be able to make investments without having to come to Azerbaijan.

Another decree, On the promotion of the “Made in Azerbaijan” brand in foreign markets, aims to enhance and diversify the production of goods for export and continuously improve their quality.

In January 2017 alone, the overall value of orders of Azerbaijani products comprised $4,630,000

However, promotion of the “Made in Azerbaijan” brand in foreign markets actually started much earlier, as Azerbaijani shelves and stores were assembled in foreign chains and international airports in 2016. Since last autumn, state-financed export missions have also been set up to represent and promote agricultural products, food and wine and construction products from Azerbaijan in foreign markets, and to advertise and exhibit them at various international exhibitions.

The fairly large number of orders received in the month since the azexport.az site was launched shows that the export project is already on track. In January 2017 alone, the overall value of orders of Azerbaijani products comprised $4,630,000 and came from Russia, Turkey, Iraq, Bulgaria, Libya, Moldova and other countries. For example, Bulgaria ordered 4,000 tonnes of red lentils at a total value of $4,000,000. Turkey, Iraq, Libya, Ghana, and Nigeria together ordered 180 tonnes of chicken at a total value of $350,000. Moldova ordered 20,000 bottles of lemonade for $20,000 and France has also made inquiries about pomegranate juice. All of this in just one month. 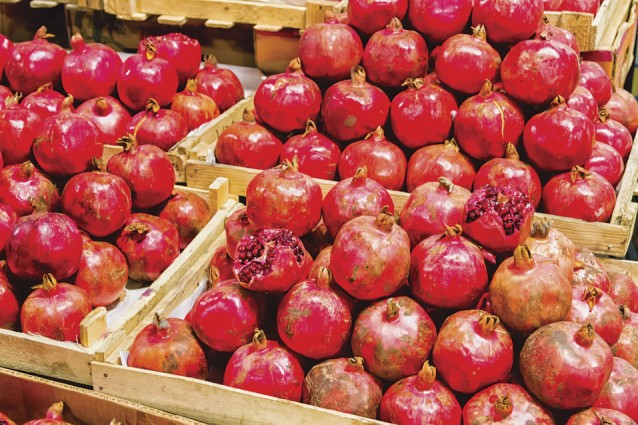 Pomegranates are widely grown in Azerbaijan and are used to make juices, jams, sauces and wine. Photo: Milosz Maslanka/Shutterstock.com

According to Economic Minister Shahin Mustafayev, Azerbaijan has also started exporting wine to China and food products to the United Arabic Emirates. In November of last year, he said, the government decided to offer reimbursements on the export of wine, cotton products, canned goods, water, juice, hazelnut and other goods produced by local manufacturers to Russia, the US, China, Germany, Turkey and Belarus.

Overall, over the last three months since the launch of azexport.az, the presence of Azerbaijani goods on international platforms such as alibaba.com has increased fiftyfold. Moreover, the latest statistics show that the total value of non-oil products exported in early 2017 is $90.2m, 49.5% more than in the same period last year.

Another important step towards developing the non-oil sector was beginning to establish trade missions in Azerbaijani embassies and consulates abroad, following a presidential decree signed on 26 January this year. Each trade representative will work towards expanding the country’s economic and trade relations and protecting its economic interests, increasing the export of Azerbaijani goods and services, promoting the business environment in Azerbaijan and investment opportunities and helping to ease access to foreign markets for Azerbaijani businesses.

In short, as the country has entered its post-oil period earlier than expected, much has been done to seek new export opportunities and make full use of the country’s potential. First and foremost this means promoting the “Made in Azerbaijan” brand in foreign markets; secondly, the development of the azexport.az website; and thirdly, the establishment of trade missions at Azerbaijani embassies and consulates abroad. Azerbaijan possesses a very high export potential, but this potential needs to be realised.

537900
SocietySummer 2018
Shamkir Shows its Potential Through EU Project
by Yelena Ostapenko
more
SURVEY
Which subjects are you looking for on this website?
24%Arts & Culture
12%Food
35%History
6%Sport
24%Travel & Tourism
Number of votes: 752
VIDEOS