Dunsterville and the Caucasus Gap 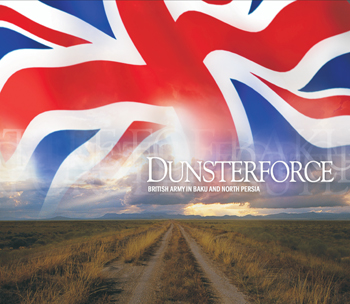 When the Bolsheviks assumed power in late 1917 they immediately withdrew Russia from the World War I and the fight against Germany and Turkey. For the Caucasus, it meant that Russian troops withdrew from north Turkey and north Persia, leaving a gap in the eastern defenses of the Allied Powers. The Germans and Turks could now cross the Caucasus to access Baku oil and Turkestan cotton. They could also threaten the security of India´s hinterland and the British Mesopotamian Army´s flank.

At the beginning of 1918, insufficient British troops were available to block the "Caucasus Gap". A mission of specialists was formed, to go to the Caucasus to organise local units to resist Turkish- German advances, to control Baku´s oil and to secure the Caspian fleet.

Maj. Gen. Lionel Dunsterville was given command of the mission. The troops under him became known as "Dunsterforce." Dunsterville and a small group left Baghdad at the end of January 1918. After an epic journey of six weeks through the mountains, they arrived in Enzeli, a port on the coast of Persia, which was controlled by the Bolsheviks. They refused Dunsterville access to the ships that would take him to Baku. He could not 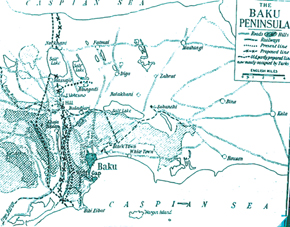 Map of Baku Defences August - September 1918
force the issue, and left Enzeli to return to Hamadan. His timing was lucky: the following day Red Guards arrived from Baku to arrest him. Dunsterville advised the British Cabinet that to carry out his mission, he would need more troops, to clear the road to the coast of rebellious tribes and to counter the Bolsheviks in Enzeli.

He was told to remain in Hamadan, in Persia. Together with his small force, he held the Baghdad-Hamadan-Kasvin line against Turkish advances from Tabriz.

Meanwhile, events in the Caucasus were developing rapidly. Both the Germans and the Turks wanted to reach Baku: although allies, they did not trust each other. Germany had signed a treaty with Georgia, moving several thousand troops into Tbilisi.

They controlled the railway, and denied it to the Turks. In the early summer, the Turks moved through Armenia and advanced toward Baku.

In June 1918, the first reinforcements from the British Mesopotamian Army reached Dunsterville. He had formed an alliance with a Cossack General, Bicherakov, who attacked the enemy in North Persia. He defeated them and cleared the road to the port for Dunsterforce. But Dunsterville could not move to Baku, as the Baku Soviet (Bolsheviks) refused to ask the British for help against the advancing 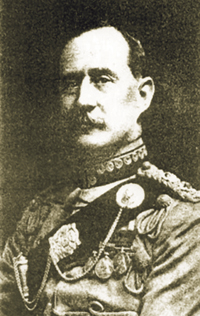 At the end of July the Turks were outside Baku. The Mensheviks ousted the Baku Soviet, forming a new government called the Centro-Caspian Dictatorship, and immediately asked for British help. The first units of Dunsterforce landed in Baku on 4 August: For the rest of the month, troops drove and walked from Baghdad to Enzeli, from where they were shipped to Baku. By the end of August, Dunsterville had 1,000 troops in Baku. The Ottoman Caucasian Army of Islam numbered 14,500, together with 1,000 Azerbaijanis of the Savage Division.

Dunsterville discovered the Baku defences were poor and the Baku Force, numbering 6,000, was ill disciplined and untrained.

By the end of August the Turks had surrounded Baku and on 26 August they attacked Dunsterforce positions on the Mud Volcano (near the present Coca Cola factory).

Fighting lasted four days. The poorly trained Baku Force troops frequently abandoned their positions, leaving Dunsterforce units isolated, one unit being almost annihilated by the Turks. Dunsterforce withdrew to positions immediately outside Baku. The Turks ceased their advance, due to their heavy casualties incurred in the fighting, and their misinformation about British troop numbers in Baku.

On 12 September, a deserter from the Turkish side warned Dunsterville that the Turks would attack on 14 September Dunsterville reorganized his defenses. The easiest place to defend was Wolf´s Gap, a road that zig-zagged up a steep incline to the top of the escarpment. A battalion of the Baku Force was placed there.

On 14 September, the Turks attacked Wolf´s Gap. There 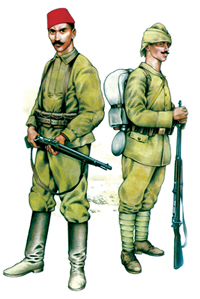 Soldiers of the Caucasus Army of Islam 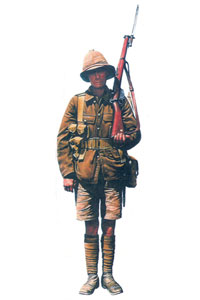 A British soldier who came to Azerbaijan in August 1918
was no defense: the defenders were not in position. This was a disaster for Dunsterforce, as the left and right flanks were split. Bitter fighting took place all day along the present Radio Mast Hill, and Dunsterforce units suffered heavy casualties: the Baku Force failed to provide support when requested.

That afternoon, Dunsterville ordered the evacuation from Baku. Contingency plans had already been made: The evacuation was completed without further loss of life by 11 p.m. Dunsterforce returned to Enzeli after six weeks in Baku.