Moscow Finds Warmth in the Colours of the Absheron

On 15 November Moscow’s State Tretyakov Gallery launched a groundbreaking exhibition of Azerbaijani artists from the 1960s - 1980s, curated under the heading The Constellation of Absheron and running until 26 February 2017. The exhibition has been jointly organised by the Tretyakov Gallery, the Heydar Aliyev Foundation and the Mardjani Foundation and brings together the work of 13 artists: 12 painters and a sculptor.

The Constellation of Absheron is pioneering on several fronts. It is the first time that so-called “official” and “unofficial” (or non-conformist) Azerbaijani artists from this period have been exhibited together, and the first time that the Tretyakov Gallery has uncovered its vast collection of works from the former Soviet republics. Indeed this marks the first in a series of exhibitions exploring the Gallery’s collection of works acquired over a sixty-year period (beginning in the late 1920s) from exhibitions around the former republics, a collection that includes well over a thousand pieces and represents all the national art schools of the former USSR. Its trove of Azerbaijani art is particularly strong and, according to Olga Polyanskaya, one of the exhibition’s four curators, represents the best of the best of Azerbaijani artists from this period: Sattar Bahlulzade, Toghrul Narimanbekov, Tahir Salahov, Nadir Abdurakhmanov, Mirnadir Zeynalov and Qeyyur Yunus.

The 1960s-1980s were seen as a renaissance period in Azerbaijani culture, as talented musicians, sculptors and artists became famous throughout the Soviet Union. Uninspired by the limitations of Socialist Realism during this period, a collective of Baku-based, non-conformist artists came together, drawn to the landscapes and culture of the Absheron peninsula. This movement later became known as the “Absheron School” and included artists such as Javad Mirjavadov, Tofiq Javadov, Rasim Babayev, Ashraf Murad and Fazil Najafov.

The work of these like-minded artists only began to gain recognition outside of Azerbaijan during the perestroika period, but in many cases they are still relatively unknown. Therefore the energy, emotion and free-spirited nature of their masterpieces, brought to Moscow from Baku’s museums and private collections, have offered something new for the Russian public.

Overall, wrote Shirin Melikova, Director of the Azerbaijan Carpet Museum and another of the exhibition’s curators, the exhibition has turned out to be very striking and diverse, coherent in its concept and gripping in its dramaturgy. 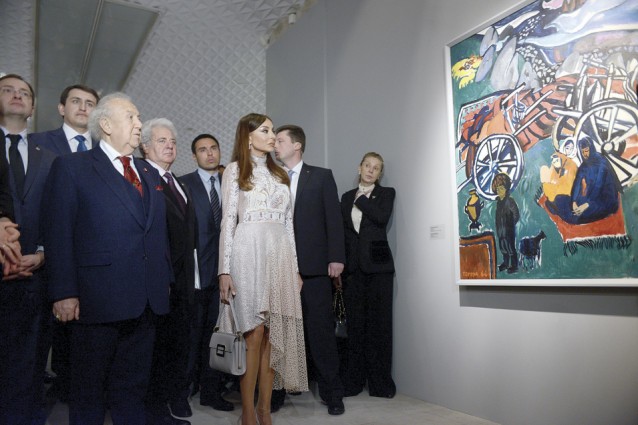 In an interview with Visions Ms Melikova explained the background and context to the exhibition: The Constellation of Absheron expands on the concept of an earlier exhibition called Beyond the Line, which was on display at the Azerbaijan Pavilion during the Venice Biennale in May 2015. Beyond the Line showcased for the first time the work of those avant-garde Azerbaijani artists of the Absheron School mentioned above, whose work was not accepted by Soviet officialdom.

Some, such as Ashraf Murad, died before their work was ever exhibited and, said Ms Melikova, most if not all struggled to make ends meet, with even brushes and paints being hard to acquire. The individual stories of these artists are worthy of articles alone. Take for example Javad Mirjavadov, leader of the Absheron School, who lived and worked in an abandoned house in the Absheron village of Buzovna. When local party officials discovered and disapproved of his work he buried much of it in the sand. The idea was to later return but this never happened and the work was never found.

Take also Tofiq Javadov, whose painting Oil Workers, an unnerving, compelling reflection of the power of the industrial machine over ordinary workers, forms the central piece around which The Constellation of Absheron came together. Javadov created it in the late 1950s, but it then lay hidden for over 50 years, only to be rediscovered in 2007 amid a pile of rubbish in an old mosque in Icherisheher (Baku’s old city), which was being used as a restoration centre. It is now housed in the permanent collection of the Baku Modern Art Museum, but unfortunately far too late for Javadov to see; he died tragically in an accident in Moscow at the age of only 37.

As much as the non-conformists toiled, official artists thrived, enjoying state support, salaries and in some cases foreign travel. They were commissioned to paint portraits of the Soviet top brass, as well as murals on public buildings and bus stops celebrating “happy Soviet life.” Their personal works were bought at high prices at all-Union exhibitions. Yet despite these material benefits there was one thing that the official artists lacked: the creative freedom of the non-conformists, for whom the struggles of the time were reflected in the emotional power of their work.

However, explained Ms Melikova, the distinction between “official” and “non-conformist” was not always clear, since there were various levels of acceptance: some artists were alienated by party circles and yet were celebrated by other artists and collectors. Nor was it clear by what criteria an artist’s work was deemed acceptable or unacceptable. There was often a great deal of overlap: avant-garde pieces could depict nothing particularly anti-Soviet while official artists also at times drifted from Socialist Realism, the then accepted style. Character and connections were undoubtedly significant.

Highlighting these blurred lines is a major goal of the exhibition, according to Zelfira Tregulova, Director of the Tretyakov Gallery, who explained in an interview with Leyla Aliyeva, Chief Editor of Baku Magazine:

As it happens we wanted to make it clear that the division made by the party between official and unofficial was completely artificial […] we look at their work now and understand that they were all part of the same process. 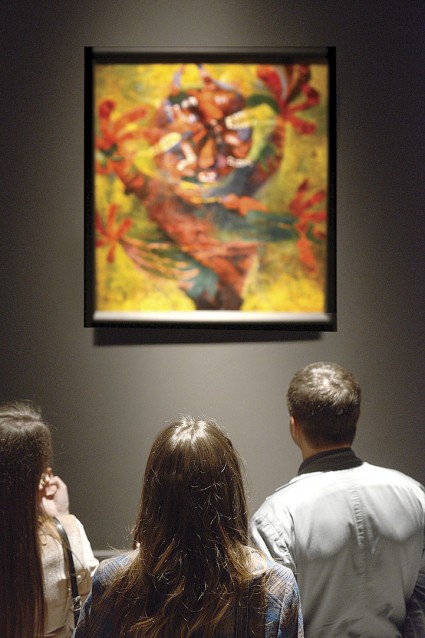 With love from the Absheron

While all the artists of this era had their own individual styles, they were also greatly influenced by one another. After all, in the Soviet Union there were only a limited number of art schools so many studied at the same institutions in Baku, Moscow or St Petersburg, where they were inevitably taught the same themes and techniques. But what also tied these Azerbaijani artists together at this time was the shared inspiration they found in the Absheron. 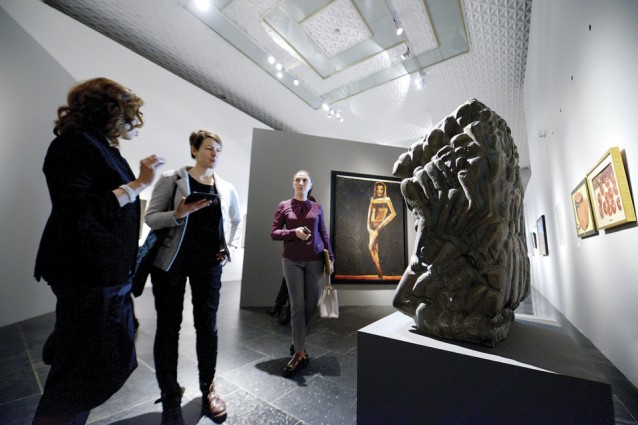 Living a short distance away in Baku, they considered the Absheron both an extension of the city and also a magical world: peculiar rocky landscapes populated with short and expressive fig trees, ancient temples and fortresses (once a fulcrum of Zoroastrianism), folklore, oil and legend. The Absheron was our Mecca, we came here to sketch, walked over all the rocks, covered many kilometres to Qobustan, sculptor Fazil Najafov told Baku Magazine.

Several of Najafov’s 11 sculptures, chiseled from soft Absheron limestone and inspired by the Qobustan steppes, are on display at the exhibition, which begins with Sattar Bahlulzade’s blue-hued, impressionist depictions of Absheron landscapes. Elsewhere are the unsettling, luring mythical creatures of Rasim Babayev, and the theatre pieces of Tahir Salahov, which uncover a new angle to this highly esteemed artist. Then there are the vibrant, soulful paintings of Togrul Narimanbekov, filled with love for his homeland, and the Tretyakov’s masterpieces of Nadir Abdurakhmanov, who flourished as an artist in the 1960s and for many years headed the Azerbaijan Union of Artists.

If you happen to be in Moscow between now and 26 February The Constellation of Absheron is well worth a visit. 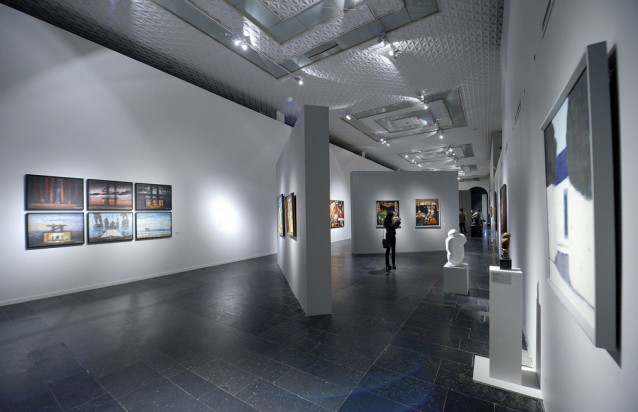 Another of the exhibition rooms