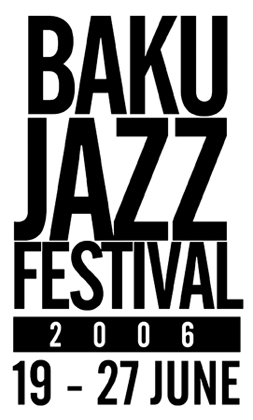 Baku Jazz Festival 2006 was perhaps one of the most ambitious artistic projects attempted in Azerbaijan´s capital in recent years. It captured many an imagination, aroused furious debate and may well prove to be a watershed in the fortunes of this enterprising outpost of jazz - whether for better or worse remains to be seen at the time of writing.

The start could not have been better. The sounds of big band jazz belting out across Fountain Square on a fine summer´s evening certainly drew a crowd. The Arena jazz band, constantly struggling for financial survival, proved itself very much alive, kicking and well worthy of support. Their disciplined but brassily enthusiastic Glen Miller swing was just right for the warm, breezy night, lifting the gathering crowd out of its late Monday torpor; a reminder to all that jazz embraces more than some guy hunched earnestly over a smoky keyboard. The perfect, populist curtain raiser – and free!

This mood was dampened a little when we headed for the Jazz Centre for the Jam session. After breaking through the cordon of uniformed security (uniformed security at a jazz club – imagine Charlie Parker´s reaction!) we hung around until 11pm, the scheduled starting time; hung on a little longer; a little longer; and finally heard some music at 12.45am. A second visit later in the week sent us home in frustration at midnight, with no musician in sight. Now, jazzmen are notoriously nocturnal, but we lesser-gifted mortals have day jobs to go to...

A quick look through the programme for the following nine days revealed the need for careful planning to avoid bankruptcy - plenty of intriguing musicians, but at what cost! 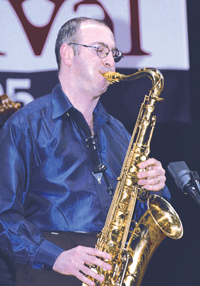 Rain Sultanov
only live once and Al Jarreau, two days later, was surely not to be missed. And before then, a chance to hear another form of Caucasian jazz from the Tbilisi jazz trio. Very tight rhythms, insistent drums and, as you would expect of Georgians, bundles of energy. It´s never boring in Georgian company and, even playing a piece on a single-note theme, this trio produced a lyricism as lively as a Tamada´s toast. Unfortunately for this writer, he had to sit through a set by the clown prince of Baku jazz, Javan Zeynalli, before the Tbilisi trio brought some sense to the proceedings. Attributing one of his songs to Al Jarreau, Zeynalli made me wonder whether I´d done the right thing in paying out the AZM40 to hear the American.

As it turned out, I needn´t have worried and Al Jarreau proved to be the international star of the festival. Before he even arrived in the country he´d made his professional mark; insisting on the wholesale (sadly, only temporary) replacement of the ailing Heydar Aliyev Palace sound system. His presence on the stage exuded talent and humanity as he took his voice and the audience through a vast range and repertoire - the voice became a sometimes soulful, and sometimes comedic, instrument of communication. He took risks; swooping, soaring and percussing in front of a quintet of almost equally versatile musicians. It was a performance of such confidence that the audience relaxed into his control from the first note. His generosity allowed him to invite ´Leila´ from the audience to share the stage and take the applause for her excellent contribution to a duet. This was the first show of his European tour, but all practice had been left in the rehearsal room and Al Jarreau demonstrated his respect for the Baku audience by offering the distillation of his art. It was hugely appreciated and worth every gapik. On the same days as Jarreau´s two concerts, 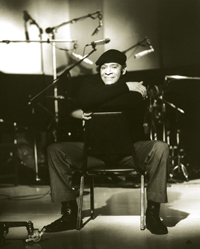 Al Jarreau
young aspirants to jazz recognition were given the stage – but performances starting at 3pm on a Wednesday and Thursday ruled them out for this working man - a pity as I recognised a few promising names. Further disappointment struck when Jamil Amirov fell ill and his very intriguing concert with the eclectic singer Sevda Alekber-zadeh had to be cancelled. Salman Gambarov´s admirers were also disappointed - he, too, was unable to participate due to ill health, and the loss of two of Baku´s leading jazzmen was a blow to the local content of the festival. The Arena jazz band did play, however, and struggled manfully, both against conditions in the barn-like Opera Studio and the handicap of having Javan Zeynalli ´do-wapping´, ´be-bopping´ and generally prancing about in front of them. Swedish pianist Bobo Stenson and Azerbaijani saxophonist Rain Sultanov were on the next ticket, which took me to the elegance of the Philharmonia. Sultanov is well-known for the local and mellifluous soul of his playing; Stenson has played with some of the great jazzmen of mod ern times: Jan Garbarek, Charles Lloyd, Don Cherry… We were clearly in the presence of professionals, but something was missing. Perhaps there had been little time for rehearsal and so they played safe. Or perhaps they were simply tired - Rain, after all, had produced the whole festival. In any event, the concert was slightly disappointing by the high standards expected - smooth but lacking that spark which sets off the very best nights.

Back in the opulence of the Philharmonia the following night; this was for me the local highlight of the week, and a fine example of what these festivals can achieve. Even from the cheaper seats upstairs, the vibrancy of pianist Shahin Novrasly´s relationship with his New York Friends was easy to see - and our ears confirmed it. Novrasly is undoubtedly the brightest of the young stars of Azerbaijani jazz, and he has been quick to seize the opportunities offered at festivals and the Jazz Centre to collaborate with visiting musicians and exchange musical experience. He has already taken mugham and folk melodies to Russia and the USA and brought musicians from those countries to the Azerbaijani audience. For this festival his now familiar bass player, Nathan Peck, was joined by drummer Matt Zebrowski and the extraordinarily dynamic saxophone of Jeff Lederer. I have written about Novrasly´s concerts before - this usually means making notes - and this time I decided I was just going to sit back and enjoy it so, no details I´m afraid.

Just to say that, if you really listen to the music, of course you can´t just sit back; the infectious rhythms of his upbeat playing defy you to be still and the delicate intensity of his slower meditations draw out your own imagination as only the best art can. It was an even greater pleasure to witness a genuinely generous collaboration between musicians united in their enthusiasm for music of Azerbaijani and other origins. A joyous occasion all-round. 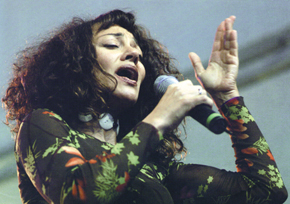 Maria Joao
The penultimate concert of the festival was by one of the biggest names in world jazz: Herbie Hancock. This is a keyboardist who not only played with the legendary Miles Davis, but who made one of the first jazz albums, Headhunters, to break through to a mainstream audience. Unlike Al Jarreau´s, however, the concert did not match the expectation. Well-supported by an excellent band, including violin, guitar and vocals, Hancock himself seemed to be still struggling for direction - this was much more typically the first date of a tour, as he shuffled papers and scores, and stumbled through the running order. A packed and willing audience urged him to success, but he had neither the colour nor the connection of his fellow American and wilted in the comparison - past glories are no guarantee of present charm and for Herbie I would have given a few qapiks less.

Portuguese singer Maria Joao performed at the Hyatt´s 1033 night club after Herbie´s concert. The rush from the Heydar Aliyev Palace to Izmir St was not the fault of the organisers - Maria should have been singing the night before, but her flight had been delayed. Financial constraints kept me away from this one, but one concert- goer described this as one of the most refreshing of the festival´s sessions. From Portuguese scat to melodic fado, Maria Joao put in a high-energy performance.
The selection, then, that I was lucky enough to be able to afford was not totally successful, but such events are bound to throw in the good, the bad and the in between and I am grateful for the opportunity to experience such a variety of jazz performance – an experience that would have bankrupted me in my own country. 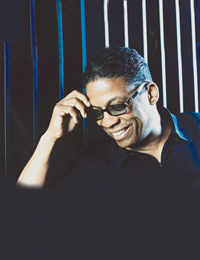 Herbie Hancock
I mentioned earlier the ambition of the project and, as this is written, it appears that it may have been too ambitious. The Jazz Centre has not yet re-opened, and there are stories of staff changes and financial difficulties. A great pity, but jazz will always be a minority taste and Baku´s resources must have been sorely stretched by the import of two superstars, not to mention the cost of hiring in a decent sound system for the Heydar Aliyev Palace - surely a matter for ministerial consideration?

It is to be hoped that this is not the end, either of the Festival or the Jazz Centre - perhaps a more focused, single headliner festival, with more attention to the jam sessions, guests invited to play with local bands and further opportunities for young musicians to make their mark; and the opening concert in Fountain Square was a great idea - more please!