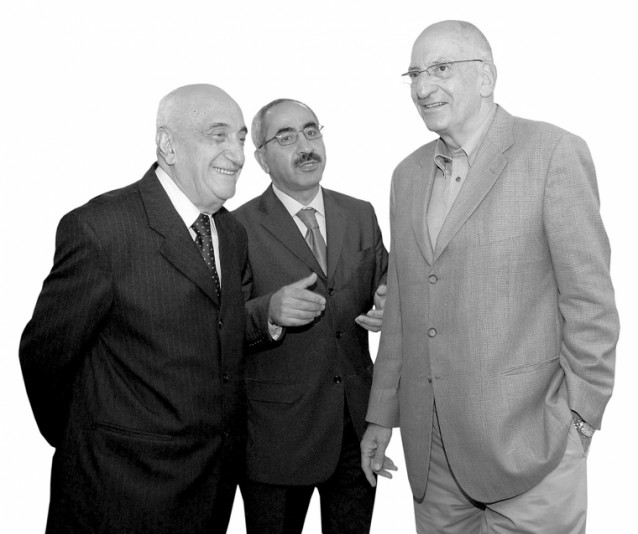 Khoshbakht Yusifzade (left) in conversation with the author (centre) and former president of the Swiss Confederation Pascal Couchepin (right), May 2008

The oil industry is one of the major drivers of modern industrial growth and development throughout the world. Oil, which supplies a significant amount of global energy, is the lifeblood of most of the world’s economies. The production of oil is a real challenge and this challenge starts with the exploration work carried out by geologists.

For most of the world, the words “geologist” and “fame” don’t usually occur in the same sentence. But certainly, there are exceptions, where these terms are not so distant after all. Among geologists, there are some “famous” ones. Khoshbakht Yusifzade is a fine example.

Khoshbakht Yusifzade is famous for being the oldest working geologist in the world. He was born on his mother’s birthday in 1930 in the village of Pirshagi in Baku and to honour this special day his father called his newborn child “Khoshbakht” which translates to “Happy” in Azerbaijani. In 1952 he graduated from the faculty of oil and gas field geology and exploration at the Azerbaijan Institute of Industry (now the Azerbaijan State Oil Academy) and started his career as a geologist. As a geologist, he has amassed approximately 65 years of experience in the oil industry.

Mr Yusifzade, apart from being a talented geologist, also has a talent for handling wide-ranging and important audiences using his incredible sense of humour. Humour is the spice of life: a little here, a little there goes a long way. He is a gifted storyteller, a master of salting and peppering his stories and speeches with jokes. A great part of his conversation arsenal consists of Molla Nasreddin anecdotes. Mr Yusifzade is a master of injecting Molla Nasreddin humour and wit into the natural flow of conversation using a range of Azerbaijani proverbs.

Khoshbakht Yusifzade’s storytelling ability contradicts the saying speech is silver, silence is gold and makes him one of the exceptional people whose words are golden. He is one of those people who have lived a life enriched by experience and learnt everything that it had to offer, be it via struggles, disappointments, convergence of power or extreme powerlessness. Yet, the value of those experiences is nothing if they are not communicated to the standard they deserve. Such people have dabbled with life and life turned out to be the greatest teacher, making things known to them by invading the unexplored paths of the mind and inner self. These priceless experiences, which cannot be acquired from books or years of study, are depicted to us through quotes, some of which should be threaded with golden strings. Quotes give us a different perspective on things, helping us to see them in a unique light. 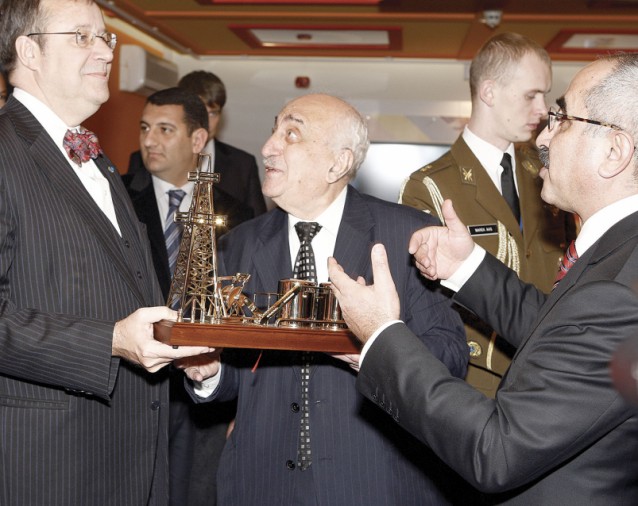 With the president of Estonia, Toomas Hendrik Ilves, January 2009

With Mr Yusifzade you find your fill of inspirational quotes and proverbs. Talking to Khoshbakht Yusifzade, a living legend and encyclopedia of the oil industry of Azerbaijan, and listening to his storytelling became a historical moment for all of us. People admire his easygoing manner of communication. 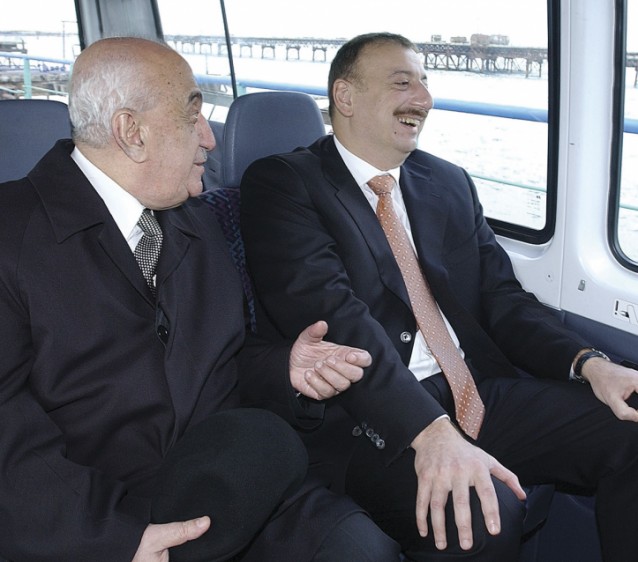 There are plenty of people around President Ilham Aliyev to talk politics. Sometimes he just needs someone who makes him laugh. Oil Rocks, November 2004

I have been honoured and privileged to host VIP delegations together with this great character at the Sangachal terminal, the BP-operated largest oil and gas processing facility worldwide and Azerbaijan’s most important strategic asset. During these events Mr Yusifzade arrives much earlier than the delegates to discuss the visit agenda and the ins and outs of preparation. After ensuring all the arrangements are put in place, you can, as always, find him entangled in various conversations with everyone and anyone. On one occasion, the VIP delegation was a presidential delegation from the Czech Republic visiting the Sangachal terminal and Mr Yusifzade asked me what I would give the Czech president as a welcome gift on behalf of BP. He proceeded to take out a small wooden box, containing SOCAR’s gift, which was another glass box with a golden medal. Within seconds, the glass box slipped from his hands, fell to the floor and smashed to pieces, leaving no resemblance of what it was seconds ago. The atmosphere of the room was similarly in pieces, having turned from exciting chats to a quiet disappointment. In order to turn the tables and cheer up the atmosphere, Mr Yusifzade did what he does best and told a Molla Nasreddin story:

One day Molla Nasreddin’s wife had passed away, and Molla was receiving people’s deep sympathies and sorrows, much to his annoyance. Once the mourning ceremony was over, he turned around and said “Don’t be upset, I was going to divorce her anyway.”

On another occasion, Mr Yusifzade and I were hosting two VIP visits that were taking place in the same week in July 2010. The first visit was a Chinese delegation that was headed by Mr He Guoqiang, a member of the Standing Committee of the Central Political Bureau of the Communist Party of China, who was ranked number three in the Chinese political leadership. For Mr He Guoqiang the security arrangements provided by the Azerbaijani government consisted of a small team, with somewhat relaxed regulations. Later in the week, we had the pleasure of welcoming the president of Mauritania, Mohamed Ould Abdel Aziz, for whom the intensity and scale of security arrangements were considerably larger and certainly noticeably different in comparison to our Chinese guests. Mr Yusifzade made the following observation about security arrangements for VIP guests: there was certainly a big difference between welcoming the third most influential political leader of a country with a population of 1.5 billion people and welcoming the president of a much smaller country of four million people. And he took the opportunity to find a perfectly fitting proverb for the situation:

It’s better to be the first man in a village, than to be the second man in Rome.

The gift that keeps on giving 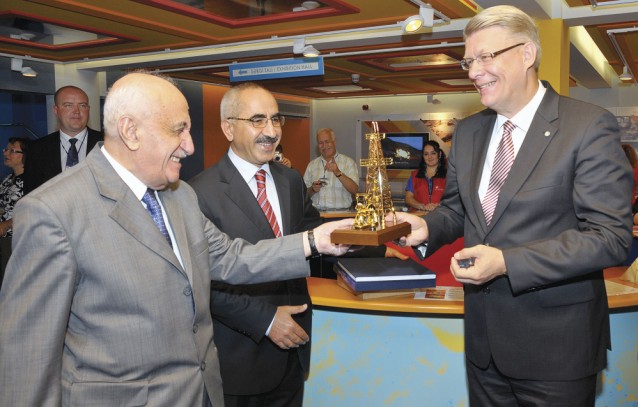 Khoshbakht Yusifzade worked on offshore fields for 10 years. Working offshore is a real challenge. Sometimes, on stormy days, you spend nearly 40 hours on the open sea in a vessel that rocks you from one side to another in order to get to the platform. Once, a strong storm hit one of the platforms in the Oil Rocks field, which unfortunately resulted in some casualties. Mr Yusifzade has always said it’s best to avoid being in a vessel in bad stormy weather, a moral which he concluded from another of Molla Nassraddin’s anecdotes:

The people asked Molla Nasreddin: tell us Molla, where should we go during a funeral procession, at the front, at the back, or at the side? Molla answered: “It doesn’t matter where you go, as long as you don’t go inside the coffin.”

Sometimes people around Khoshbakht Yusifzade ask him how he makes presidents laugh. They understand that telling a joke that misses the mark can take the wind out of your sails pretty quickly. Of course, this is Khoshbakht Yusifzade’s gift that keeps on giving: when world leaders laugh and are entertained, it gives you the confidence to deliver the message in a more relaxed environment. You thrill them. You move them. It really is a fantastic feeling to get the leaders to chuckle. Their faces brighten up and their attitudes change. Wherever world leaders need to free themselves from pomp and pageantry, wherever there are problems they have to solve, there will be people like Khoshbakht Yusifzade, who can loosen up the atmosphere and humorously divulge lessons on various themes in life.

As SOCAR’s first vice-president, Mr Yusifzade is still engaged in many activities. He has overcome many difficulties in his life. He witnessed terrifying situations at sea as well as many casualties involving oilmen on offshore platforms in the Caspian and has made many close and challenging calls in his life. He has outlived his many good colleagues and friends and suffered the loss of his two sons. During his lifetime, he has experienced bad illness from which he eventually recovered. The wear and tear of the years have done little damage; he remains optimistic and always looks forward to something good. And you will see Khoshbak  Yusifzade working with the same zeal and enthusiasmas before, presiding over various conferences and events, sharing valuable advice and experience with the oil workers. 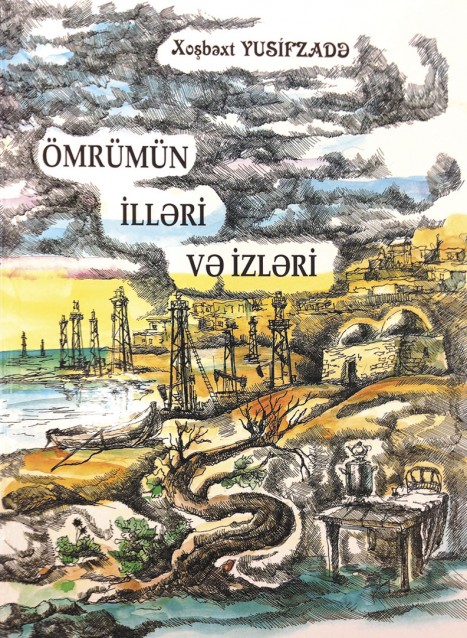 Front cover of The Footprints of My Life by Khoshbakht Yusifzade

It seems that part of what makes Mr Yusifzade happy is creating good memories for everyone around him. He has written his life story in a book published in 2010 called The Footprints of My Life, a copy of which he presented to me. It includes the memories and mementos of his rich life which I found extremely fascinating and have read several times. I am sure he will find more to add to the book of his life after hitting 87 in January 2017!

About the author: Guivami Rahimli joined BP in 1995 as a Government Relations Expert and currently serves as the Sangachal Terminal Social Manager for the BP Azerbaijan, Georgia and Turkey Region. He also served as president of the Azerbaijan-Norway Friendship Society, which created bonds of cooperation between Azerbaijan and Norway across education, culture and business.