Shah Deniz Gas on Target to Reach Europe in 2018 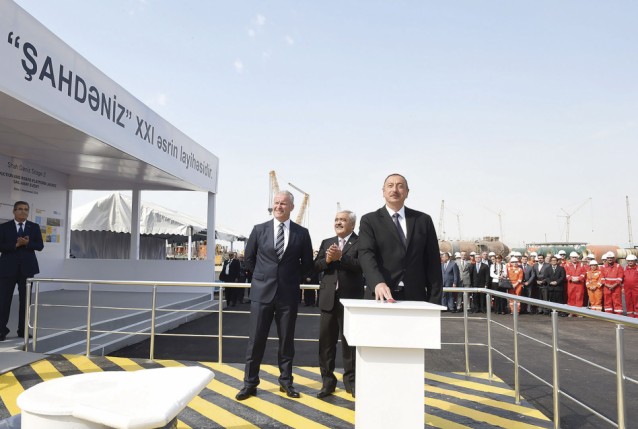 President Ilham Aliyev launches the sail-away of the platform jacket for a Shah Deniz 2 offshore platform on 1 September 2016 Photo: president.az
Ensuring the security of energy supplies has long been a major priority for the European Union (EU). This requires achieving multiple, and therefore diversified, sources of energy, which makes Azerbaijan important as a country rich in oil and gas resources. Today, the confirmed volume of Azerbaijani gas resources is 2.6 trillion cubic metres. Of this, 1.2 trillion cubic metres is held in the Shah Deniz gas field, which is considered one of the largest gas fields in the world. Therefore, the exploitation of this field is of great significance to relations between the EU and Azerbaijan, in which energy security comprises an integral role.

So, how is this going? What measures have been taken to exploit Azerbaijan’s potential to play an important role in supplying natural gas to Europe from Shah Deniz? Is everything being executed according to plan?

Azerbaijan started exporting its gas 10 years ago, in 2007, when natural gas began to flow to Turkey after the launch of the Baku-Tbilisi-Erzurum gas pipeline between Azerbaijan, Georgia and Turkey.

Of course, at that time, the issue of energy security in Europe was not on the agenda and neither gas project was considered profitable. However, Azerbaijan, by taking its first steps in this sphere, showed that it was confident about becoming a large gas exporter.

The Shah Deniz field is located 70 km southeast of Baku, on the Caspian Sea shelf where the depth ranges from 50 to 500 metres. The first gas here was extracted in November 2006 from a well drilled from a rig constructed in accordance with the agreement signed on 4 June 1996. This was in the first stage of Shah Deniz (Shah Deniz 1), during which it was expected that the maximum annual production would be 8.6 billion cubic metres of gas and that the daily volume of condensate would be 50,000 barrels. Since 2006, the natural gas produced here has only been used to satisfy the needs of Azerbaijan, Georgia and Turkey.

The full-scale development of the field relates to the second stage of Shah Deniz (Shah Deniz 2). It is currently expected that an additional 16 billion cubic metres of gas will be produced annually, meaning Shah Deniz is one of the largest gas projects in the world. Of this 16 billion cubic metres of gas produced during the second stage, six billion will still go to Turkey and 10 billion will be transported to Europe.

Shah Deniz 2 was given impetus by the Joint Declaration on the Southern Gas Corridor signed between the European Commission and Azerbaijan in January 2011. In 2012, the signing of a historic agreement on the construction of TANAP (the Trans Anatolian Natural Gas Pipeline between Turkey and Azerbaijan) then created the conditions to make a final decision on investments in the Shah Deniz 2 project in December 2013.

In general, we can unite all these under one title - the Southern Gas Corridor - however, there are four projects that are currently being realised: Shah Deniz 2, SCP, TANAP and TAP. In total, $45 billion will be spent on these projects. 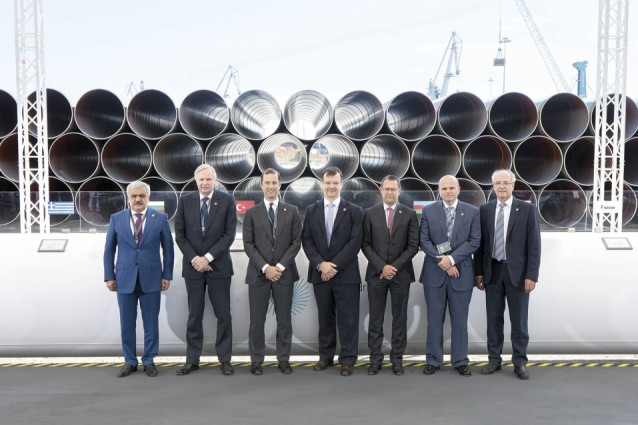 Representatives of the shareholders in the Trans Adriatic Pipeline (TAP) at the ceremony on 17 May 2016 in Thessaloniki, Greece, to mark the beginning of construction on the pipeline Photo: tap-ag.com

In 2016, work on these projects became stronger, speedier and wider in scope. Firstly, the second meeting of the Advisory Council of the Southern Gas Corridor was held in Baku in February and determined to further strengthen international cooperation between energy producing, transit and consumer countries. Although the Southern Gas Corridor currently brings together seven countries - Azerbaijan, Georgia, Turkey, Greece, Bulgaria, Albania and Italy, three more Balkan states - Montenegro, Bosnia and Herzegovina and Croatia – are expected to join at a later stage. So Azerbaijani gas will be exported to even more countries.

Besides this, on 17 May 2016, in Thessaloniki, Greece, the foundations of TAP were laid during a ceremony attended by Alexis Tsipras, Prime Minister of Greece, Yagub Eyyubov, First Deputy Prime Minister of Azerbaijan, Natig Aliyev, Azerbaijani Minister of Energy, Rovnag Abdullayev, President of the State Oil Company (SOCAR), Amos Hochstein, the US Department of State Special Envoy and Coordinator for International Energy Affairs, Marosh Shefchovich, European Commission Vice President for Energy, Ian Bradshaw, TAP Consortium Managing Director, as well as high level officials from Albania, Italy, Turkey, and Bulgaria and representatives of the companies that are members of the TAP Consortium.

However, there is no doubt that Shah Deniz 2 is at the foundation of all these projects. Plans to develop it further still include constructing two platforms connected by a bridge, drilling 26 subsea wells with two semi-submersible rigs, constructing a 500-km long subsea pipeline at a depth of 550 metres, modernising the ships carrying out construction works in the sea and expanding the Sangachal terminal.

Up to now, the implementation of this project has been successfully continuing at all onshore and offshore production and installation fields. Almost 77% of the project, including engineering, procurement and construction, is complete. In preparation for transporting the first gas and then increasing production within the project, 10 exploitation wells have been drilled using the Heydar Aliyev and Istiqlal drilling rigs.

On 1 September 2016, a ceremony at the Baku Deepwater Jackets Factory (BDJF), attended by President Ilham Aliyev, marked the sail-away of the platform jacket for the Shah Deniz 2 Production and Risers Platform.

This support block weighs 13,150 tonnes and stands 105 metres high. It contains 12 production risers, three export risers and one import riser. The jacket will be installed at a depth of 94 metres. It was constructed by the BOS Shelf, Star Gulf and Saipem consortium in just two years and has the largest number of risers in the Caspian Sea. The transportation, launch, positioning and pile installation of the jacket were carefully planned and completed on time and on 29 June 2016 it was successfully loaded onto barge STB-1 of the Caspian Shipping Company at the quayside of the BDJF in preparation for the sail away.

The platform jacket was fully constructed in Azerbaijan using local infrastructure and materials. Over 4,700 people were involved in its construction, including contractors and specialised suppliers. Approximately 90% of those involved were locals, an achievement that President Aliyev drew attention to in his speech at the ceremony, where he highlighted that the jacket sail-away proved that Azerbaijan is able to achieve great things: 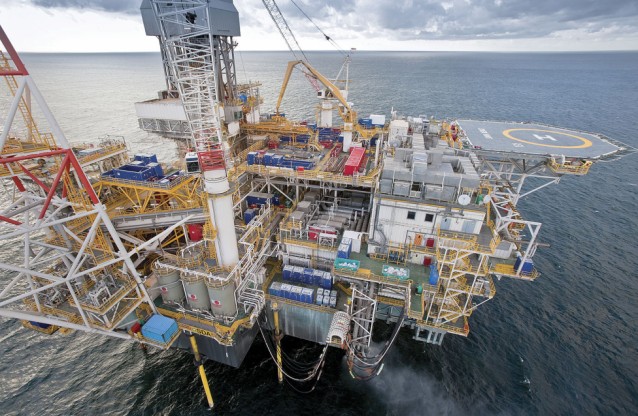 An offshore oil and gas platform, part of the first stage of Shah Deniz

It is gratifying that the jacket and topsides of the platform are fully built in Azerbaijan. The vast majority of people working on the construction of these giant installations are citizens of Azerbaijan, he said.

In short, taking into account the efficiency of work on the Southern Gas Corridor so far, at this rate the entire process should be completed between 2018 and 2020. Current projections are that the first gas will be produced in 2018. So the transportation of gas from Azerbaijan to European countries will start on time, as was initially planned. A key theme of the Azerbaijani oil and gas strategy over the last 20 years has been to increase the proportion of local workers. Over 80 per cent of those involved in the Shah Deniz project are Azerbaijani citizens Photo: president.az

Of course, the cooperation between SOCAR and BP is a major part of this success and has lasted for more than 20 years. The work done during this period has created the conditions for these two companies to cooperate for at least another 20.