AT HOME WITH THE MOLOKANS

During break time at the school in Ivanovka children chase one another in the disappearing snow. A statue of Heydar Aliyev stands grandly in the centre of the school yard, a symbol of modern Azerbaijan. But the statue almost seems out of place here in Ivanovka given that many of those running about are fair-haired and Russian speaking. Here, the surroundings and atmosphere differ from elsewhere in the country, yet this small, timeless village is located right in the heart of Azerbaijan.

Nadezhda Vasiliyevna teaches history at the school. She’s also responsible for the village museum, housed in a classroom on the second floor. We go to meet her as the bell rings and several six-foot-plus Russian students file back into class. The atmosphere is upbeat – plenty of shouts and laughter - but almost reminiscent of another time and place.

When she arrives Nadezhda Vasiliyevna is full of energy and enthusiasm and eager to show us the small exhibition, which begins with a display of the old wooden farming implements brought by the original settlers in the mid-19th century - wooden ploughs and spades and assorted land-tilling utensils. Then comes the traditional Molokan clothing and piles of letters written to the cousin of the wartime spy from Baku, Richard Zorge, whose Soviet spy ring was interrupted by the Japanese in 1943. And moments later we come face to face with the man whose name is synonymous with Ivanovka.

He was a born leader, Nadezhda Vasiliyevna says as we look as the sun-bleached photos of Nikolay Vasiliyevich Nikitin in the fields and leading crowds.

They say that someone like him is born once every hundred years.

Nikitin’s legend was forged over 42 years of leading the collective farm, a farm that still bears his name. Yes that’s right: whilst all the other collective farms in Azerbaijan have long since disappeared, the Kolkhoz imeni Nikitina or Nikitin Collective Farm puffs defiantly on…

The collective farm’s headquarters are housed in a once grand building in the centre of the village. The new chairman is Vasiliy Ivanovich, the man tasked with taking the farm forward in the challenging economic climate of modern times. I meet him in his spacious office lined with old wooden chairs.

Wheat, barley, dairy products, peas, sweet corn, grapes and cattle production are all meeting quotas set by the government, he says before several phone calls distract his attention. At this point, Olga Timofeyevna, from the local government, takes over.

“I think that as long as the Molokans live here, the kolkhoz will continue”

Initially, after Azerbaijan had been engulfed by the Soviet Union, there were three collective farming associations which morphed into one in the run up to the Second World War. But following the war the kolkhoz was on its knees. Enter Nikitin, who, despite being wounded like many other villagers returning from the front, was appointed chairman of the collective farm. He was to lead for the following 42 years, during which the kolkhoz became so productive it was dubbed a kolkhoz millioner (millionaire collective farm).

Organising was evidently in his blood, says Olga Timofeyevna, he solved any problems himself. He was a judge and procurator and a member of parliament all at the same time. He established such order that people started to live very well.

Hence his legacy lives on at a time when the kolkhoz’s fortunes have faded in the post-independence years. Today, wages have dropped to about $50 a month and working hours are extremely long. The collective farm in Ivanovka is the last in Azerbaijan and in most if not all of the former USSR. Olga Timofeyevna offers several reasons why:

Firstly, because the Molokans are used to living communally. Secondly, she continues, We looked at the experiences of the other villages around us... They divided their land, everyone has their own share. Experience showed us that this [collective farm system – Ed.] is better.

I think that as long as the Molokans live here, the kolkhoz will continue, she says.

Faith as pure as milk

Back at the museum Nadezhda Vasiliyevna relates the following: whilst official documents record that Ivanovka was founded in 1837, the village was actually founded in 1834. The founders were Russian Molokans who had been resettled to the southern frontiers of the Russian empire for not conforming with the customs of the Russian orthodox church. They came to Azerbaijan by foot, many stopping along the way to found settlements elsewhere, others dying from disease and hardship.

“They considered their faith as pure as milk ”

Do you know where the name ‘The Molokans’ comes from? Asks Nadezhda Vasiliyevna.

I put forward the most popular version, that the Molokans were originally a group of ‘spiritual Christians’ who defied Russian orthodox rules by drinking milk during fasts and therefore became known as Molokanye or the Milk Drinkers. Nadezhda Vasiliyevna agrees but adds: The second version is that they considered their faith as pure as milk.

The third version has darker undertones and relates to the arduous journeys the Molokans undertook from the Russian regions of Tambov and Voronezh. Catherine the Great was the first to begin resettling them in two directions, to Siberia and the Caucasus, which would serve two purposes: Russianising the new frontiers of the empire and preventing the spread of non-conformism. Many died along the way or stopped to found settlements in other parts of the Caucasus:

But the elders punished them and told them to continue, Nadezhda Vasiliyevna says, and during these journeys, the person who sent them reported that many ‘kanut,’ which in old Slavonic means ’were dying.’ These people [Orthodox Christians - Ed.] hated the Molokans so much that they would say ‘ix malo kanut,’ that ‘not enough are dying’ - meaning that more should be dying. This is where the word ‘Molokanstvo’ [Molokanism – Ed.] came from.

Molokanism, according to Nadezhda Vasiliyevna, is about clubbing together and helping one another out. On a religious level, it means living with an open heart and relating to everyone with kindness and equality. These are the qualities that have kept the collective farm operating well after the fall of the USSR and preserve the village’s connection with the past. But times are changing and many of the younger generation are emigrating north to study or settle and in the process some revert to the Russian Orthodox church.

We drive through the quiet, timeless streets of Ivanovka, lined by old Russian wooden houses, many of them for sale and occasionally juxtaposed with an elaborately-gated, newly-built villa belonging to wealthy newcomers. Next to one of those we call in to see Vasiliy Terentevich, a Molokan presvyter (presbyter), or elder.

“I think that as long as the Molokans live here, the kolkhoz will continue”

Being a presvyter means that Vasiliy Terentevich is head of the Molokan church and the moral authority for Ivanovka’s churchgoing Molokans. His simple white wooden house possesses a small backyard and front garden and contrasts markedly with the gilded mini-mansion next door. We knock and after a brief pause the white-bearded Vasiliy Terentevich appears.

Later in the afternoon I sit down for tea with him and Mikhail Timofeyevich, his second-in-command. The young are leaving and the old are dying, the latter says in relation to current demographic trends. Up until 1940 Ivanovka was exclusively Russian but today the village of around 3,000 souls is also home to Azerbaijanis and Lezghins.

Of every 100 villagers, approximately 30 are Russian and the rest are Azerbaijanis, notes Vasiliy Terentevich, lamenting that at the moment Molokanism is disappearing.

The pair feel no hostility towards their neighbours. On the contrary the Molokans have always been welcomed in Azerbaijan – My father lived here, my grandfather lived here and now I live here, says Vasiliy Terentevich, nobody has ever told me to leave, everyone treats us peacefully, whichever village you go to everyone greets you with “hello, hello” and invites you in as a guest.

Azerbaijan’s multi-ethnic make-up is widely promoted but perhaps the Molokans’ good fortunes also have something to do with several unexpected similarities between their brand of Christianity and the Shia Islam practised by many Azerbaijanis:

The decline of the Molokans therefore seems largely economic and strongly linked to the fall of the USSR and the subsequent challenges the collective farm has faced in adapting to a world of private enterprise. Nostalgia is strongly felt by many Molokans in the village, who built and experienced the kolkhoz at its peak:

I was 14 after the war… I was just a young boy but I helped to build all this farming and then suddenly it was demolished, says Vasiliy Terentevich.

At 8 o’clock on Sunday morning the Molokans’ small prayer house, known simply as the sobraniye, is divided into two rows of benches facing one another. A table bearing a Bible and several archaic books of psalms is positioned at the head of the room but there are no icons, no decorations, just the radiant wintery sunshine bouncing off the plain white walls. Men and women sit apart: women, wearing colourful headscarves, sit further towards the back while men, in simple black shoes, plain dark jackets, the elderly with their customary long white beards, occupy the front area. Immediately around the head table are those about to read the psalms and at the very head and last to arrive, Vasiliy Terentevich and Mikhail Timofeyevich orchestrate proceedings.

“The young are leaving and the old are dying”

The service itself lasts about two and half hours, most of which is spent singing a collection of hauntingly beautiful psalms, each of them lasting for about 20 minutes and gradually increasing in depth and building towards a crescendo. Some members of the congregation are more willing singers than others. Vasiliy Terentevich and Mikhail Timofeyevich contribute prayers and readings from the Bible. The procedure is utterly simple and unceremonious and almost the entire congregation middle-aged or elderly. My overall impression is of a deeply spiritual ritual that could barely have changed since the first Molokan settlers founded the village in 1834.

The service ends and with it my brief contact with the Molokans of Ivanovka, tainted with a lingering sense that this old way of life is slowly disappearing. But about a month later I return to the prayer house one Sunday afternoon to be met by a group of young Molokan girls bounding through the door, down the path and into the village. There go the young ones, says tyotya (aunt) Nastya, an elderly woman arriving for the Sunday afternoon service and suddenly it seems that Ivanovka’s Molokans might be around for quite a bit longer… 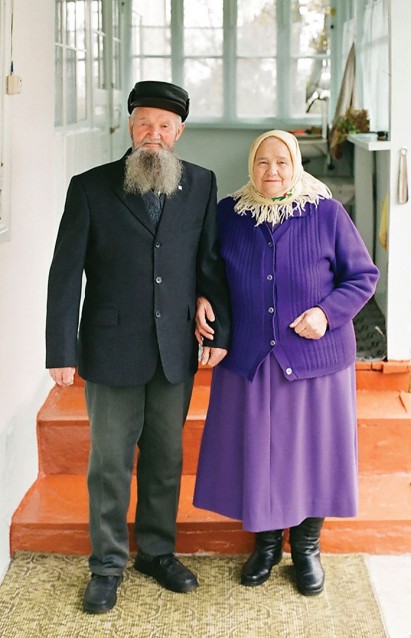