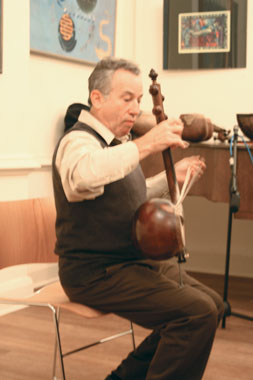 Jeffrey Werbock has performed at an evening of Azerbaijani traditional music in the British capital. He flew in from Philadelphia to appear at the event on 19 October in Pushkin House, organized by the London Azerbaijani Society.

Jeffrey Werbock is one of the few Western interpreters of the highly complex music of Azerbaijan. Known for his delicate and subtle performance, he has introduced audiences throughout the world to the microtonal, improvised musical tradition of Mugham. For more than 12 years he studied aurally in the traditional manner with Zevulon Avshalamov, acknowledged as one of the great masters of Azerbaijani music. Werbock has performed throughout the US, Europe and the Middle East and has appeared on Azerbaijani radio and television. In 2001 Jeffrey Werbock was awarded an honorary degree from the Azerbaijani State Academy of Music and in 2002 was chosen to serve as official host and presenter for the Azerbaijani portion of the Smithsonian Institute´s Silk Road Festival. As a recognized expert on Azerbaijani Mugham Werbock lectures and performs widely.

"Azerbaijan is the last great secret of world cultures. And it is my job, my pleasure to make sure that everybody knows about Azerbaijan," Werbock said before his performance.

He began with improvisations of Shur Mugham on the oud, or barbad as Werbock prefers to call it. Then the delicate sound of the oud was replaced with the mournful strains of the kamancha. Werbock played Bayati-Shiraz on the tar, which is well suited to expressing the melancholy and nostalgia of love. And at the end he played Shushter on the kamancha. In his fluent Azerbaijani Werbock said "Şüştər çox incə və sakitdir" ("Shushter is very delicate and peaceful").

The harmony of the music wove its web of attraction over audience and performer alike. Nobody wanted to wake from the sweet dream created by the musician´s skilful performance of Mugham. "The arm of Azerbaijani music was so strong that it reached distant America and brought me here," Werbock said at the end. "I am the first, but I believe that there will be many more who will know and feel the power of Mugham." 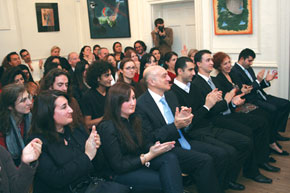 Mr Gurbanov in turn thanked Jeffrey Werbock and the audience for their interest in Azerbaijani music. "I have known this man for 17 years…What Jeffrey has done for Azerbaijan is great, it is very valuable," the ambassador said, presenting a certificate of appreciation to Jeffrey Werbock for his promotion of Azerbaijani culture and contribution to the development of Mugham.

The evening really belonged to Azerbaijani music. Far from Azerbaijan, in one of the most metropolitan cities of the world, performed by a non-Azerbaijani master, Mugham proved once more that it is a masterpiece of human heritage. Yes, music has no language, but it can say more than any language. Many thanks to those people that let us feel this mystery.