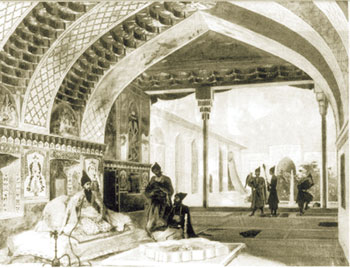 Serdar Palace in Irevan (Yerevan) by Gagarin. The palace was destroyed by Armenians in 1913-18
Pages 34-38

Azerbaijan and the wider Caucasus have always attracted travellers, writers and historians. While the region could be harsh and ruthless towards its enemies, it provided a haven to the malcontents of the Tsarist regime. Nineteenth century Russian poet Mikhail Lermontov is one of the best known figures to have been banished to the Caucasus. The mountains were to be his final resting place when he was killed in a duel in 1841.

Lermontov’s friends accompanied him into exile, one of whom was the painter, Prince Grigoriy Grigoriyevich Gagarin (1810-93). (Soviet sources sometimes omitted his noble rank.) Gagarin was fascinated by the unique beauty and mystery of the unexplored Caucasus. He possessed an encyclopaedic knowledge and great talent in painting, architecture and illustration. At the same time he researched art history, was vice-president of the Imperial Academy of Art and took up important diplomatic posts. He saw and accomplished a great deal, but the Caucasus left an indelible impression on him. Gagarin researched the anthropology and rich history of the many different ethnic groups in the Caucasus. He produced a great number of water colours, paintings, drawings and illustrations on this theme including two albums Scenes, paysages, 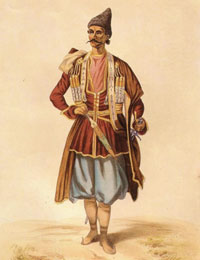 Karabakh Khan by Gagarin
meurs et costumes du Caucase (Scenes, Landscapes, Customs and Costumes of the Caucasus) and Le Caucase pittoresque dessine d´apres nature (The Picturesque Caucasus Painted from Nature) which were published in Paris in 1847 in Russian and French. The illustrations from the series are kept in the Russian Museum in St Petersburg and the Historical Museum of Azerbaijan in Baku; similar drawings are in Russia’s Museum of Regional Art in Makhachkala and the State United Museum of Dagestan.

The painter spent more than 10 years in the Caucasus with some breaks. Art critics say Gagarin’s Caucasus period began in 1839-40 and continued into the 1850s. Gagarin often travelled across the Caucasus for his official work, accompanying the governor. He had to return to Petersburg in 1841 and until 1843 he made only brief visits to the Caucasus. In 1848 Gagarin returned properly to the Caucasus and joined the staff of Vorontsov’s detached corps in Tbilisi. This was a period of relative calm for the Caucasus.

During his various visits to the Caucasus Gagarin often came to Azerbaijan - Baku, Yelizavetpol (now Ganja), Shamakhi and other cities. He was interested in everything - in the lifestyle, culture and art of our people. He was also interested in ancient monuments that showed the culture of the whole South Caucasus.

Gagarin was interested in the Azerbaijani ethnographic type. The works A Persian Girl in Baku, Karabakh Khan and Woman in Shamakhi are examples. In these works the painter uses contours, shading and two or three local colours to convey form and important details. Some paintings stand out from the body of his work. The drawings Karabakh Khan and Shamkhal of Baku do show the artist’s attempts to convey individual character and 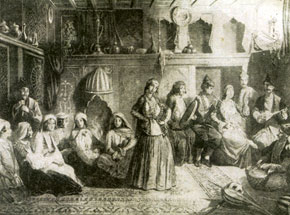 The Dancers of Shamakhi by Gagarin
psychology.

The portrait of Abbas Gulu aga Bakikhanov (1794-47) is especially interesting. Abbas Gulu was a prominent scholar, educator, poet and statesman. Gagarin’s drawing of Bakikhanov is an unfinished pencil work, with the painter’s own description, "Abbas Gulu, son of the last Baku khan, historian of the South Caucasus". The portrait is little known amongst the wide circle of admirers of Bakikhanov’s heritage. As in other portraits he is shown in military uniform, bareheaded and with only the Order of St Vladimir on his chest. The portrait was drawn rapidly and remained unfinished. Bakikhanov saw a great deal in his life, success and failure, but his will and courage remained unbroken and he is ready to fight for his ideals despite inner turmoil. The exact date of the drawing is not known, but it must have been painted during Gagarin’s first trip to the Caucasus in 1840-43, as Bakikhanov died on pilgrimage and was buried in Mecca in 1847. Researchers think that they could have met in Tbilisi in 1843 when Bakikhanov worked at the Caucasus Committee. This portrait is also of historical importance as it was painted from life. Although it was not finished, it gives us an impression of Bakikhanov in later life. His last work in the series dedicated to the Caucasus shows the famous fire temple, the Ateshgah, in Surakhani village near Baku. The temple is now included in the list of UNESCO monuments.

One of the artist’s more widely published 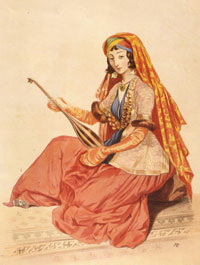 Shamakhi Girl by Gagarin
works is The Dancers of Shamakhi. It shows a fairly common scene, either part of a wedding ceremony or a local festival, a mejlis, typical of a rich Azerbaijani family. The drawing shows many people inside the wealthy family’s house in Shamakhi; it is thought that the composition was especially arranged or that the ceremony was organised for important and respected guests. Gagarin was clearly familiar with the Azerbaijani lifestyle, culture and ethnography. The drawing illustrates the interior in detail, showing beautiful carpets, dishes and wall paintings. All these are closely connected and complimentary. The depiction of the girls also attracts attention. Each figure is well thought-out, individual and graceful. Researchers managed to identify the girls. Famous dancer of the time Sona and male dancer Hikmet are at the centre, while around them Nisa, Sakina, Izzat and Maleyka applaud. Beating out the rhythm on castanets is Gandi khanum, who is reputed to have been a famous dancer. Gagarin showed musical instruments in detail; the donqar, a type of sumsu-balaban, which is a wind instrument with a round mouthpiece and stem that widens downwards; the daf, a cross between a drum and a tambourine; the nagara drum; the bass tebil or drum with a belt; and two string instruments played with a bow.

Art critics consider The Dancers of Shamakhi one of Gagarin’s best works. The Russian Museum has many unfinished sketches and drawings related to this composition including Dancer, Dancers and Dancers and Musicians. In all his work Gagarin pays special attention to costumes and decorations, emphasising their originality. Art critics think that Gagarin over-idealises the female characters, while the male characters are more 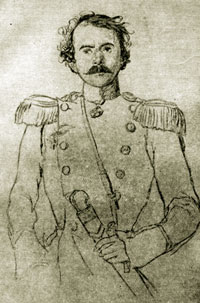 In his Shamakhi Girl illustration Gagarin depicts the musical instrument, the chogur. This string instrument is still used in Georgia where it is known as a chonguri.

The depictions of architectural monuments, buildings and residential houses in Shamakhi are especially interesting, as many of them were destroyed during the earthquake. These illustrations are the only surviving images of Shamakhi at that time. Gagarin was interested in all types of Azerbaijani architecture from classical monuments and complexes to religious and residential buildings. There is both romanticism and realism in his illustrations with the artist feeling and reproducing the originality of Azerbaijani architecture. His illustrations Ruins in Shamakhi, Ruins of a Minaret and Courtyard of the Khan´s Palace reveal a good knowledge of architecture and oriental design. Gagarin acquired this knowledge through contact with local craftsmen in the Caucasus and his illustrations are full of respect for their creative genius. The drawing Courtyard of the Palace of the Khan Built by Sultan Khalil in the 15th Century is interesting for what it depicts rather than its composition. The drawing is simpler than many others; although the divankhana or court-house and its arches are clearly depicted, they lack the detail characteristic of most of the artist’s work. Gagarin shows a young musician playing the tambourine and two dancing children who may be wandering minstrels. The artist includes himself in the foreground, wearing a Russian military uniform and drawing this simple scene. Gagarin has a small body of work in the landscape genre, mostly seascapes and cityscapes. The best drawings are of the urban landscape. Baku has been painted by many artists and Gagarin is no exception. He drew the city in 1840 and 1854. His illustrations are of great interest thanks to his careful observation, exact reproduction and study of the features of oriental, especially Azerbaijani 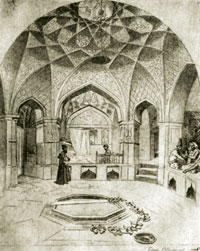 Interior of the Public Bath House in Shamakhi by Gagarin
architecture. The Baku Khan´s Palace, Absheron is a striking example. The lithograph was made by Benoit. The artist shows the divankhana and Shirvanshahs’ Palace from the upper terrace, the minaret of the Shah’s mosque, through the arched entrance of which it was possible to enter the yard and the ancestral tomb.

The Interior of the Public Bath House in Shamakhi in the 17th century (1840) reproduces the decoration in detail including the carved ornamentation in the cupola.

Art critics praise Gagarin’s versatile work. He shows a lively interest in life in Azerbaijan and the Caucasus as a whole, in local traditions and culture. At the same time his illustrations give a superficial view of real life in Baku and its environs and the Caucasus. The artist established the facts of events and recorded images of his contemporaries, but did not go into the sociopolitical problems of the region. He was interested in ethnographic material, which he gathered in the Caucasus. His assiduous work over many years makes up some of the most complete research on the culture of the Caucasus and its different peoples. This is of special interest as some ethnic groups have either disappeared completely or are on the verge of extinction. These illustrations are the only proof of their existence in the region.