The magical mountain lakes of Goygol National Park are as iconic to the Ganja region of Azerbaijan as the Maiden’s Tower is to Baku. Lake Goygol has appeared on stamps and in poetry, paintings and songs. Yet for years the area has been out of bounds to most visitors. As recently as spring 2015, when Visions last tried to visit, an army barrier prevented tourists getting anywhere near. But in summer 2015, rumours began to surface that parts of the National Park had been unexpectedly thrown open. Social media was rapidly a-twitter with excitement as videos began appearing set to the classic Azerbaijani ballad Göygöle Gel (Come to Goygol). For travel author Mark Elliott, the temptation to see for himself proved too much to resist. 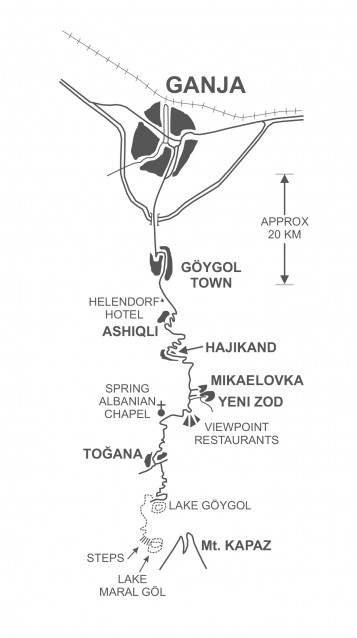 For the second time this year I am driving up the country lane that wiggles up from the hazy plains south of Azerbaijan’s second city, Ganja heading for the forests of Hajikand. We pass the out-of-place windmill-folly that marks the Helenendorf Restaurant-Hotel then climb through Ashiqli village where aproned women stand at tandir stoves selling egg-yolk yellowed bread rounds and jars of mountain honey. Beyond are woodland glades dotted with small kebab restaurants and many stalls with domed saj-hotplates cooking the local speciality - kətə (kata) - a Ganja-regional term for qutab-style savoury pancakes.

Behind Hajikand, the bracing scenery starts to get really spectacular as we round the corner onto a high hillside stretch with Mt Kapaz’s rocky beak making regular appearances on the southern horizon

Hajikand itself is not so much a town as a scattering of datcha-villas. The original ones date from the first oil boom of the early 20th century when many millionaire oil barons built themselves hillside getaways here with sweeping views back down onto the plains. So many of these newcomers were wealthy hajis (Muslim believers who had completed the hajj-pilgrimage to Mecca) that locals came to call their de facto settlement Hajikand (the ‘town of hajis’).

When I came this way in spring 2015, many of the older datcha-villas were in a very bad state of decay as they had been for years. Now, however, new lampposts and a big new fortress style wall are being erected in front of the old “strip” and many of the ruinous historic structures have been reduced to piles of rubble awaiting redevelopment. There are two main exceptions - a small red-stone chapel and the wobbly wood-lace fronted mansion that locals claim was built for oil baron-philanthropist Zeynalabdin Taghiyev. Both look worse for wear but seem destined for preservation.

The north-facing views from Hajikand are sweeping. But behind Hajikand, the bracing scenery starts to get really spectacular as we round the corner onto a high hillside stretch with Mt Kapaz’s rocky beak making regular appearances on the southern horizon. These views have long been incentive enough for visitors to come this way, but now if all goes well there is a greater prize across the valley.

Mt Kapaz’s unmistakable cleft crown was not always such a distinctive sight. In September 1139, the region suffered the most devastating earthquake in centuries. Not only was the city of Ganja effectively flattened but Kapaz’s peak-top crag was shattered sending millions of tons of geological debris showering down its southern slopes. In several places the outfall blocked rivers creating artificial dams and, behind those, a string of beautiful lakes appeared.

Now nicknamed the “Tears of Kapaz,” they are ringed by glorious woodland slopes. The largest and most famous is Goygol itself (literally “Blue Lake”). The lake has inspired artists and poets and thanks to youtube I’m serenading the journey with a wide range of Goygol music - from Sevda Alekperzade’s Latin-toned salsa celebration to Chingiz Sadiqov’s trotting piano tinkle. In a few weeks the foliage will be a festival of auburn and yellow as it was when the celebrated Azerbaijani impressionist, Sattar Bahlulzade, came to paint here back in October 1962, rendering the scene as a dazzling series of semi-abstract streaks.

The colours had been a similar feast of autumnal russets the only previous time I managed to visit Goygol back in 2000. On that occasion I was smuggled through the army post by a canny taxi driver who somehow managed not to wind down the smoked windows of his Lada as he talked his way through the army check points. Today there is no need for such cloak and dagger techniques. And my driver – 44-year-old Nabir – is quite a different character - a giant, jovial ball of flesh who started the trip by buying a shopping bag full of cookies which he proceeds to eat, a packet at a time, in a steady stream washed down by gulps of Fanta in between mouthfuls of sunflower seeds and long thin Imperial Classic cigarettes.

The road beyond Hajikand winds past several well-spaced cafés enjoying the fine mountain panoramas and we stop briefly at a small Albanian chapel-ruin beside a roadside spring. Then a ladder of hairpins spins us down to a village called Toghana (though signs label it Toghanali) at the bottom of a deep cut valley. For many years, Toghana’s series of streamside rest areas and cafés were as far as most travellers could proceed. But now, the army-manned barrier beside the Cänät Makan (Paradise Place) Hotel has turned into a de facto ticket office taking 2 AZN per person from visitors heading into the National Park Area. The troops diligently note the car number plate and warn us to be out of the park by 8pm, though quite how that can be enforced is hard to gauge. And rapidly we’re on our way. Amazingly painless.

Lake Goygol is another 6km from here through seemingly endless woodlands. Potential hiking trails in between are very visibly out of bounds, symbolically blocked with ‘Stop’ ribbons as though each were a crime scene awaiting investigation. Approaching the lake, the taxi is ushered into a large car park from which the final stretch down to the waterfront is on foot through a surprisingly high tech security fence… Looks like a prison! jokes Nabir. He is under the impression that the whole place is a presidential domain of the utmost secrecy and keeps begging me not to take photos. His information, if once true, is completely out of date.

The main building of the lakefront complex might once have been an official residence but is now clearly marked “Hotel Goygol,” an exclusive, yet-to-open getaway that’s one of five hotels slated to start business by 2016. Its most distinctive architectural feature is a double set of external lift-towers linked via plexiglass walkway tubes that would seem to belong more on a space station than in a national park. These will allow residents to get down to the waters’ edge in two easy hops if they don’t feel like strolling or taking an electric buggy. Where the lower lift tower emerges there’s already a small but idyllically set café where a 5 AZN pot of tea is your license to sit on the raised over-water balcony-platform watching swans glide across the water.

The scene at Goygol is undoubtedly beautiful but the area that visitors can explore feels a little restricted. Fortunately, Nabir assures me, the same cannot be said of the slightly smaller lake, Maral Gol, some 7km further up. Apparently that is more peaceful and arguably more beautiful.

So I agree to pay him a little extra and we judder onward, his aging Lada crunching over steep rocky sections of the initially horrendous track.

Where this ‘‘road’’ dead-ends at a car park, my heart drops to see a swampy little pond.

No not that one! laughs Nabir. That’s Jili Gol. Follow me.

Maral Gol is in fact up some 250 steps from the car park, a feat of climbing that proves severely taxing for poor Nabir after all his cookies. At the top is a small lip of earthen bank beyond which lies the lake, a poetic vista of crystalline blue-greens. A small “beach” dips its toes into water so pure it seems transparent over a garden of weed where oversized tadpoles are turning into wriggling little frogs. Hardly a soul is here this late September afternoon and the trio across a lakeside bay reflect prettily in the gently rippling waters as they photograph each other beneath an overhanging oak.

And sure enough Maral Gol wins out over Goygol on walking potential. I strike out along the path from the upper lake ridge and am swiftly climbing above the tree line. In less than 30 minutes I find a glorious viewpoint. Below lies limpid Maral Gol backed by the ever-looming Kapaz and in the foreground is a knoll dappled with the purple trumpets of meadow saffron flowers.

Further up is a shepherd’s camp (beware of dogs) and the feeling one could walk for miles, but it’s time to return to the car where Nabir, defeated by the rigours of the climb, has been approached for a ride by a hitch-hiking soldier. Why not do a good deed? So he jumps in the back and gazes out of the window as we bounce back down to Toghana.

The soldier has been posted in a camp there and presumably this is simply a workplace for him. But even so, he is clearly not immune to the beauty of the afternoon light filtered through gently rustling leaves. Quietly, almost imperceptibly at first, he breaks into song. There it is again – the old classic Göygöle Gel, Göygöle Gel (Come to Goygol, Come to Goygol), a pining evocation of the lakes’ beauty that’s so magnetic that it’ll draw back anyone who’s been here. How could I disagree?!

Maral Gol is in fact up some 250 steps from the car park, a feat of climbing that proves severely taxing for poor Nabir after all his cookies

Is there a bus to Goygol? Ask that in Ganja and the answer is Of course! And it’s only 20 qepiks. But you’ll quickly realise your mistake. That bus is to Goygol town, formerly the village of Helenendorf which has since been renamed several times. The lake is 40km further. There is no public transport that goes all the way. I paid 30 AZN return by taxi from Goygol town, but it’s possible to find drivers charging the same all the way from Ganja if you ask around. The key is to ask how long the driver is prepared to wait around for the price. Taxis to Toghana (10 AZN per vehicle) are occasionally available on a share basis from Ganja, but from there it’s still around 20 AZN by taxi to the lake so the saving is minimal.

The road to Goygol lakeside is largely well sealed if occasionally steep. However from there the 7km on to Maral Gol are contrastingly rough with the first 500m a toxic mix of steep mud and big loose rocks, later improving into a bumpy stretch of very degraded old road. In a Zhiguli (Lada) taxi you’ll probably manage to persuade the driver to give it a go for an extra 10 AZN. But drivers of posher cars won’t attempt it, leaving you to pay one of the Niva 4WD vehicles which typically wait at the Goygol Lakeside and offer the ride for 20 AZN return on summer weekends. In the off-season they might be harder to find.

About the author: Mark Elliott is a veteran travel writer and author of the guidebook Azerbaijan with Excursions to Georgia, first published in 1998 and now in its fourth edition.