A Historic Victory: Baku Sees Polo at its Very Best

Azerbaijan is known as the homeland of polo, which was formerly called Chovgan here. In 2013, after a long break, the sport returned to Baku with the Grass Arena Polo World Cup Azerbaijan. Following the huge success of the past two years, this year World Polo presented the 1st FIP Arena Polo European Championship, which was held in Baku from 4-12 September. This year’s tournament was even bigger: eight days instead of the previous four days and six teams instead of the four teams that participated last year. Those six teams were: Germany, Ireland, Switzerland, Italy, Spain, and a local team from Azerbaijan, all of whom battled it out for the honour of becoming European Champions.

The event was organised by the Zurich-based organisation World Polo, in association with the Equestrian Federation of Azerbaijan and the Elite Horse and Polo Club Bina in Baku. Sportswear brand La Martina signed on as the official supplier of the tournament. Each team had three players and two substitutes and the organisers provided a pool of 72 Argentine polo horses from the Alegria and Garros Polo Farms in Argentina especially for the event. The tournament produced some highly competitive matches.

All six teams demonstrated some excellent play and kept the audience on the edge of their seats. However, the main battle involved just two teams – Azerbaijan and Germany. During the first chukka (there are four ‘chukkas’ or periods in arena polo – Ed.) the Azerbaijani team started with some very accurate and effective play and scored two goals. But the Germans, who featured Patrick Maleitzke, the two brothers Philipp and Oliver Sommer, as well as the young Niklas Steinle, kept themselves in the game.

In the second chukka the Argentinian pro and coach of the Azerbaijani players over the last three months, Silvestre Garros, fell off his horse but managed to return to the saddle very quickly. On the other side, Patrick Maleitzke also suffered a fall but mounted immediately and put his team into the lead for the first time in the match. By the end of the third chukka the Germans had raced into a two-goal lead with the score at 5-3, and in the fourth and final chukka discussions surrounding penalties and goals generated a tense atmosphere. Both teams were a hair’s breadth away from victory as the score stood at 5-5 with a minute until the final bell, but then the Argentine Silvestre Garros scored the deciding goal of the tournament.

The enthusiastic local audience had come together behind Garros and the rest of the team - Elchin Jamalli, Tarlan Gurbanaliyev and Rashad Hasanov – during a final of outstanding quality. Polo really was at its best in Baku.

The only female player in the tournament

Another interesting aspect of the tournament was the Irish team, or more specifically its only female member. Yes, this is the first time a female polo player has taken part in this tournament in Azerbaijan. The local audience greeted her very warmly and for a short period of time she was the centre of all the applause. Her name is Siobhan Herbst and she agreed to talk to Visions about how she became a polo player (see the section entitled ‘‘Siobhan Herbst’’).

Plans for the future

In December this year, Azerbaijan is going to bid to host the FIP World Championship in 2017. Next year, the Arena Polo World Cup will be held in Baku again. Four teams will attend the tournament which will run over four days.

As the head of World Polo, Reto Gaudenzi, said, a number of projects are being implemented for future tournaments in Azerbaijan. One of them is the construction of four new full-size grass polo fields which is already underway - two in Baku and two more in Qabala, the northwestern region of Azerbaijan, where the climate is more bearable for the horses in the hot summer season. Beyond this, the new polo school in Baku is open all year round and attempts to bring more and more Karabakh horses, the famous Azerbaijani breed, into polo are ongoing. 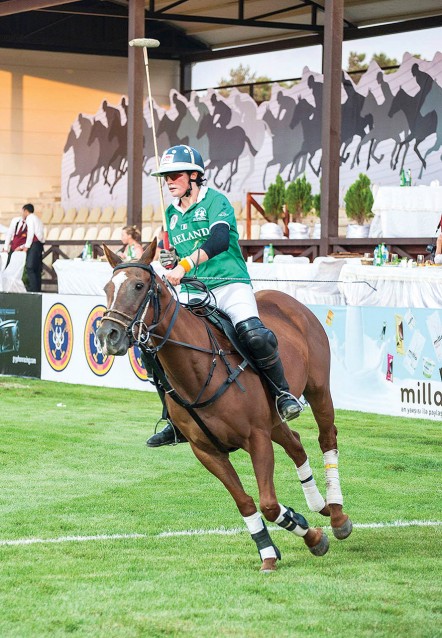 Siobhan Herbst in action for Ireland

Just tell us a little about yourself and how you became a polo player, a sport that demands so much strength and endurance?

I was born and bred in Wicklow, Ireland. I grew up on a farm, so I have always been an animal lover. When I was four, my mother took me riding for the first time and I have never looked back. My father had played polo for 45 years but my interest began to show and late one evening I started riding the polo ponies, but my father knew that if he encouraged me to play polo it wouldn’t be long before I took his horses, so he always avoided the subject.

When I was 18, another girl came to play at our club so my father told me that I was going to play my first polo game. My mother wasn’t happy because I had just bought a new horse and she knew once I got the polo bug that the jumping horse was gone! After that I never looked back. So that is how I played my first match and true to my father’s thoughts, 10 years on, I have now cut his string of horses down to two and increased mine to 10. I now run Polo Wicklow, my father’s club which he opened in 1993; these are the only all-weather polo facilities in Ireland and runs all year round.

I think my biggest passion/addiction for polo is the horsemanship with the horses and companionship with your teammates. The horses aren’t like ordinary horses, each one is different and you must adapt to them rather than trying to make them adapt to you. As you don’t just ride one horse, you have to learn how to ride different horses and you have no time to think about it as the game is so quick. Also, with polo you meet the most amazing people, get opportunities to travel the world and see amazing places. How can you not be addicted to this sport?

Ireland took third place in the tournament, which was a good result. Could you tell us what were your team’s strengths, and the weaknesses that prevented Ireland from winning?

We were very proud to pick up the bronze medal. We were a young team that hadn’t played much together. I personally had played a lot in arenas but the arena in Baku was very different and showed the different skills in each player. Our strength was the determination of the team, we all got stuck in and worked our hardest to the very end, whether we were winning or losing. I also think that we were all individually strong team players, so we worked well as a team and knew how to get the best from each other on the field.

We had the two toughest teams on our first weekend, Azerbaijan and Germany, so we really got thrown in at the deep end. We had to adapt very quickly, as did the other teams, to new horses and new rules. I think maybe, had we played the stronger teams the second weekend we might have been more organised with our horses and understanding of the new rules, but saying that they also would have been more organised, so there is no saying the results would have changed.

We played Spain for the bronze medal and only won in the last seconds, it was a very tough game and at no stage did they let us breathe. We had beaten them in the qualifying games by two or three goals and they didn’t want to let that happen again so they gave everything, they were a very tough side. I think any of the teams could have made it to the final; the games were all close.

I’m sure this is an event that will grow and grow, and I would love to return with the Irish team, but next time to bring home the gold!

What were your impressions from the Polo tournament in Baku?

I really enjoyed the event. The atmosphere was incredible and the Azerbaijani people were very accommodating. We were very lucky with our horses and the guys who looked after them did a great job keeping them in good condition for the tournament. I’m sure this is an event that will grow and grow, and I would love to return with the Irish team, but next time to bring home the gold!

The model of polo was new to us and very interesting. It’s something that we are looking at using for an event we are hoping to hold in Dublin next year.

What was the difference?

The model that they used in Baku was like grass polo but in an arena. In arena polo in Ireland/Europe we have backboards so that the ball never goes out. We also used a different ball. For arena we normally use a small leather ball and in Baku we used the snow polo ball which is lighter and harder to control but it suited the surfaces we played on as it was larger.

You can always learn so much from these types of events, you see how well they are run by the experts and try to use some of their expertise in future events. One of the highlights was after all the games were over and we were walking back towards the bus in front of the stands, where a lot of the Azerbaijani supporters were still sitting, they all stood up and cheered for us, we felt like royalty. That was a great feeling.

I thought Baku was a stunning city, the history within such a modern and new city was incredible. On one of our days off we took a driver and went off to the historic place where they have the ancient writing on the rocks, Qobustan. It was a real privilege to get so close to these historic drawings. We then went to the mud volcanoes, places that I’m sure when the city and country have grown will be full of tourists and hard to get to. It was a real treat to see all of these things.

One of the highlights was after all the games were over and we were walking back towards the bus in front of the stands, where a lot of the Azerbaijani supporters were still sitting, they all stood up and cheered for us, we felt like royalty. That was a great feeling.

About the author: Jeyran Bayramova is a freelance journalist and former staff writer for Visions. 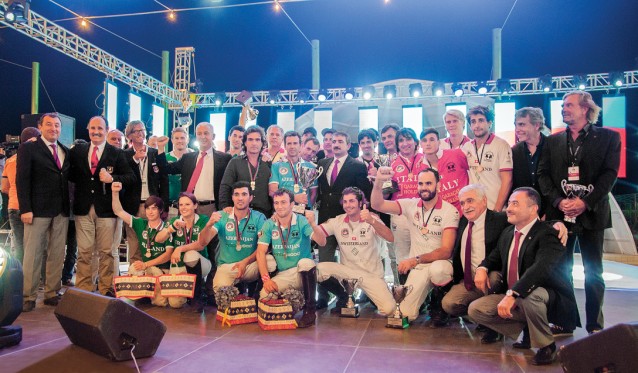 The players, organizers and members of the Elite Horse and Polo Club Bina at the closing ceremony on 12 September