THE KEBAB KING OF MINGACHEVIR 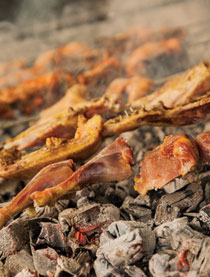 The Kur Sport & Rowing Centre is Mingachevir’s star attraction from an international point of view. It once nurtured the best in Soviet rowing, kayaking and canoeing talent and attracted national teams from the former Eastern Bloc for winter training. A recent renaissance aims to put Mingachevir firmly back on the global rowing map and to host major international competitions, beginning with the canoe sprint and kayaking at Baku 2015 at Baku 2015. On a recent visit, however, the river remained largely quiet and just a few young Azerbaijani canoeists drifted effortlessly through the water in the early evening sunset.

But we had come to discover a place of regional rather than international fame, a few kilometres away in central Mingachevir. The Kafe Samux Vadisi was a simple establishment featuring isolated open-air tables surrounded by small private rooms. A jagged pond-like feature lay in the centre of the restaurant’s concrete terrace, in the shadow of two giant, leafy chinar trees. A metre or two from here was where the magic happened - the long charcoal-filled mangal (barbecue – Ed.), the restaurant’s raison d‘être. The Kafe is informally known as “Hasil’s Café” after the owner, whose reputation as the finest kebab man in Mingachevir draws customers from as far afield as Baku, Ganja and Qabala. Eager to learn why, we (the Visions team) joined Hasil early one morning for his daily trip to the central bazaar.

Red-faced, quiet and smoking slim cigarettes, he was greeted by a continuous file of curious Mingachevirians at the perimeter. Hasil has been coming here for over 30 years, said his companion, a restaurant handyman who doubled as Hasil’s personal accountant. His first purchase was a bag of alça (miniature green, intensely sour plumbs), followed by an assortment of fruit and veg - tarragon, reyhan (basil), baby onions, tomatoes, radishes, green peppers, potatoes, apples, lemons and eggs - the main criteria being that everything was fresh.

Around the corner, Hasil approached the rooster pen and clutched several upside down to inspect their feet. Shortly after five of the best were slaughtered and boxed, to be transported by porters back to the restaurant to join the other meats of the day – lamb, goat (kid) and beef. There were several varieties of fish too, including pike, carp and zander, as well as two Kura River specialities in the form of eels and a true river monster - the nakha, a murky brown catfish, with a broad mouth, thin lips and whiskers, which can grow to an astonishing size in the depths of the River Kura. A truly enormous one had been delivered to Hasil’s the morning we visited, the length and breadth of a medium sized shark. 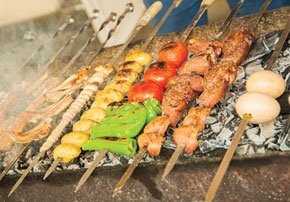 The mangal complete with a full selection of kebabs - liver, kidney, lamb, potatoes, vegetables and even eggs

Are they dangerous? I had to ask. They could be, but they don’t attack people, Hasil’s assistant replied. The following day, however, I heard a story emanating from a late night conversation, of a diver from Baku who’d come to measure the water level of the Kura River (following a flood) and dashed back shortly after, shaken and panicked, following an underwater meeting with a nakha. Another man, a well-known local fisherman, was similarly spooked when a hulking catfish rocked his boat in the enormous Mingachevir Lake, and he refused to take to the water for one week after.

Dangerous or not, they sell for between 100 and 150 AZN per fish at the bazaar, where we observed Hasil flipping open the gills, using their redness as a sign of quality. He generally buys one every other day, depending on demand. Small, slender and referred to as “snake fish” for obvious reasons, the eels are equally popular in Mingachevir due to their abundance in the river, ready availability and comparatively low price. That morning a large catch had been reported and hauled back to the restaurant from the bazaar.

At about 12pm Hasil’s men emptied coals into the two long mangal trays, sharpened their knives and set about dicing the meat and crafting the kebabs. The lule is one of the most popular and comes in two varieties: machine blended and hand crafted. The latter retains more juiciness and flavour but takes some twenty minutes to craft. In the kitchen behind the mangal different parts of the lamb – arm, shoulder and neck – were painstakingly diced, mixed with herbs and greens (basil, dill, onions, salt and pepper; plus pomegranate in winter) and finally molded evenly along the skewer.

The kebabs were then placed across the mangal, which soon began to fizzle and crackle under the browning meats and colourful vegetables. Meanwhile Hasil was taking a break, drinking tea and hammering die across the backgammon table. His role today was clearly mostly managerial, yet in his younger years he’d once cooked for the former president, Heydar Aliyev, in nearby Yevlax.

Customers started to filter in from 1pm, a steady stream of local government workers, policemen and small businessmen, but Hasil’s still had the air of a quiet retreat in sleepy Mingachevir, whose drab matchbox housing and general neatness emanated a lingering Soviet-era feel. In one of the private rooms a group of tax officials was celebrating a colleague’s birthday: 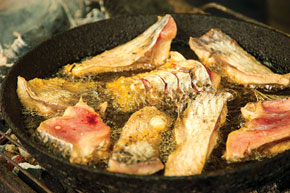 If you say Hasil’s, everybody in Mingachevir knows what you mean, said a thickset, jovial man tipping vodka our way. Sometimes I visit other cities and when I say I’m from Mingachevir they mention Hasil, he continued. According to the tax crowd, it was “the taste of his hand”that made Hasil’s kebabs so popular.

We settled down for lunch too and soon enough waiters brought a selection of fresh salads and kebabs to our table. We tucked into a dish of deliciously salted and tender beef, liver and kidney kebabs and dipped thick chunks of toasted bread into tomato, suzme (yoghurt) and cornelian cherry dips, washed down with fresh fig compote. The next round featured the soft, caramalised catfish, which was admittedly quite tasty. The “snake fish” followed in small tube-like chunks, their texture rubbery and the flavour exuding a little too much of the River Kura River. Side dishes continued to arrive - potatoes, the apple kebabs (made from sweet Quba apples), walnuts and eggs, all consistently well cooked and seasoned.

There’s no secret, Hasil said, just fresh products. Elsewhere in Mingachevir locals were celebrating Heydar Aliyev’s 92nd anniversary and most of the city had congregated on the embankment where folk music, national costume and all sorts of arts and crafts produced an atmosphere worthy of a provincial village fête. A rusty motorised boat named ‘Titanik’ puffed ominously along the river carrying groups of school children, and canoes had embarked from the rowing and canoeing complex further west. Whether at the embankment, the rowing centre or the kebab restaurants, the Kura River was the heart and soul of leisurely Mingachevir. 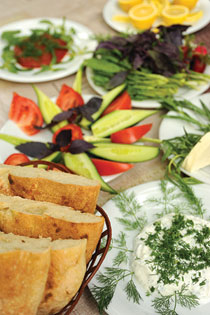 Toasted bread and fresh vegetables are served together with the kebabs

Back at Hasil’s, customers kept arriving throughout the afternoon, the kebab men continued their dicing, seasoning and skewering and every so often the porters poured more fish into the muddy pond and delivered meat to and from the freezer and the kitchens. Hasil drifted between the barbecue and the backgammon board and several resourceful cats stalked the simply assembled tables, waiting for scraps that might be lobbed their way. In such a way the Kafe Samux Vadisi continued its snoozy late spring existence, before Hasil abandons Mingachevir at the end of the month to set up camp in the village of Oguz and the cooler climes of the mountains. There, he will of course continue to make kebabs, and to lead his loyal entourage and customers as though he were the Pied Piper of Mingachevir.

Arriving from Baku by train will actually bring you to the village of Aran, 16km southwest of Mingachevir. Therefore we recommend taking the bus, which from Baku’s international bus terminal takes around five hours, mostly driving via the Ganja highway then cutting northwest through Goychay, Aghdash and Khaldan. Hasil’s Café is centrally located on sleepy Heydar Aliyev Avenue east of the Kura River - just ask anyone in Mingachevir! Note, however, that the café closes down from late May until autumn. 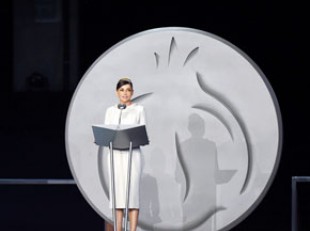 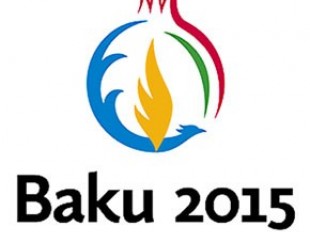 538090
SocietySummer 2018
Shamkir Shows its Potential Through EU Project
by Yelena Ostapenko
more
SURVEY
Which subjects are you looking for on this website?
24%Arts & Culture
12%Food
35%History
6%Sport
24%Travel & Tourism
Number of votes: 752
VIDEOS