THE GLORIOUS MOUNTAINS OF QUBA 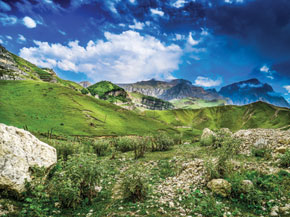 A photo exhibition produced by a social project called the Metro Gallery, supported by Baku Metro and Kapital Bank, opened at Baku’s Ganjlik metro station on 15 July. The exhibition is the first project by Metro Gallery, which aims to support emerging artists, and displays 92 works by 32 artists which show the very best of Azerbaijan – the lush mountainous landscapes, sandy beaches and cosmopolitan Baku, the country’s multiculturalism, spirit and creativity.

One of the artists exhibited is Russian photographer and designer Anastasia Osipova, who spent several weeks in Azerbaijan last summer. She has kindly agreed for Visions to publish her stunning work, which features the gloriously green and mighty Caucasus Mountains around Shah Dag and Laza in the Quba region of northern Azerbaijan, famous for its sweet apples, intricate carpet weaving and multiple ethnicities including the Mountain Jews, Lezghis, Tats, Gryz and the people of Khinaliq. We also decided to ask Anastasia a few questions – 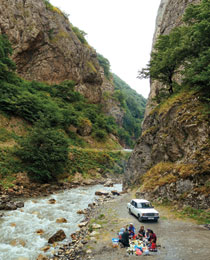 What was your inspiration for visiting the Caucasus Mountains?

I have always been attracted to mountains – their majesty and mystery, power and raw beauty. I spent my childhood in the North Caucasus region of Russia and I had always wanted to see the other side of the mountains – the Zakavkazie as they call the South Caucasus in Russia. When the opportunity came to visit Azerbaijan I wanted to go off the beaten path, to places still clear of mass tourism, where there’s still space for adventure and exploration and the local people are genuinely welcoming and hospitable. In choosing Quba, I wasn’t wrong. This region is still not very well known amongst western tourists and yet it has enormous potential – the region is very beautiful and interesting but travellers are still few and far between.

What were your impressions once there?

The hospitality of the Quba people was incredible! One of them, Ali, put everything aside and spent two whole days showing us interesting places in the city and around and treating us to the tastiest local food. On one of the days we drove into the mountains towards Khinaliq.

The higher we went the more beautiful the views became. Finally the road came to an end and we were at the foot of a mountain from the top of which flowed two waterfalls. The panoramas of the cliffs, waterfalls and gorges were breathtaking; I could have continued admiring the landscape forever. But the weather was changeable and within minutes the hot summer’s day turned to dark clouds and rain. 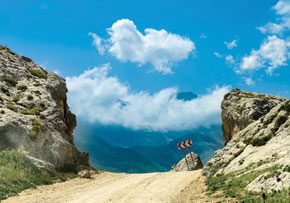 What did you try to capture in your photographs?

The result of this short trip is these pictures of the wonderful South Caucasus through which I want to communicate its grandeur, strength and unspoilt beauty. A dramatic sky and mountainous setting is the ideal recipe for landscape photography. I didn’t have much time to choose different places and angles to construct the frames and some of the photos were taken on the move straight from the car. Nevertheless, using a short shutter speed I managed to get some successful shots and even a picture of locals having a picnic by a mountain river at the bottom of a gorge. I love colourful, eye-catching photographs and I try to compose the image in as interesting a way as possible.

What advice would you give to others wishing to visit the region?

Not even the world’s best camera could do justice to the magnificence of this region, so the best thing to do is go there yourself and enjoy the beauty of the South Caucasus countryside in all its splendour. I plan to go higher at some point, to the snowy mountaintops, and return with no less breathtaking photographs.

About the photographer: Anastasia Osipova is a Russian photographer and designer based in Vienna. She is a graduate of the Federal Training and Research Institute of Graphic Arts in Vienna, the oldest photography and design institute in Europe.

543910
SocietySummer 2018
Shamkir Shows its Potential Through EU Project
by Yelena Ostapenko
more
SURVEY
Which subjects are you looking for on this website?
24%Arts & Culture
12%Food
35%History
6%Sport
24%Travel & Tourism
Number of votes: 754
VIDEOS