JEWS OF AZERBAIJAN AND THE UNITED STATES: In celebration of Our Transcendent Connection 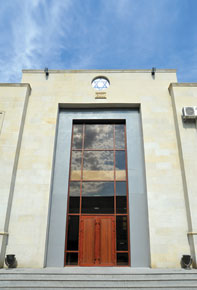 Jews have lived in peace and prosperity in Azerbaijan for centuries and today they continue to flourish, serving as a bright example of both Azerbaijan’s unique multi-faith society and of peaceful Jewish-Muslim coexistence. Visions is privileged to re-publish the following article, on the special relationship developing between the Jews of Azerbaijan and the United States, written by the head of Azerbaijan’s Mountain Jewish community and published in the Jewish Weekly in April this year.

Californian and Azerbaijani Jews share a special bond, and our special friendship is becoming better known this year, as a number of important events have taken place that commemorate our connection. The last flight I took across the 7,000 miles between us was to return to Los Angeles in February with a delegation of fellow leaders of the Mountain Jewish community of Azerbaijan. Our purpose in visiting was to receive and celebrate the gift of a new Sefer Torah from the Jewish community of Los Angeles. A new Torah takes about a year to write, each letter composed in painstaking scrutiny; a single imperfection rendering the entire document invalid. The creation, and even the transport of a new Torah is a challenging and expensive process, and the Torah itself, perhaps the most meaningful bond between Jews across the world and cultures. What is particularly unusual about Jewish life in Azerbaijan, which is a close friend and partner of Israel, is that we live and freely practice our faith in peace and prosperity, protected and respected, in a secular Muslim country. We share cities and towns, and live and work with our Azerbaijani Muslim brothers and sisters. By its example of tolerance and inclusion, Azerbaijan destroys all the stereotypes that exist out there in the world as far as the co-existence between Muslims, Jews, and Christians is concerned.

The Azerbaijani example proves that it is still possible for all these major religions to enjoy peaceful and harmonious co-existence in mutual respect. As Jews, our reality in Azerbaijan is somewhat like a dream. Imagine a Muslim government that spends millions of dollars on building a beautiful synagogue for Jewish residents, or a Muslim country that celebrates a Jew as one of its greatest war heroes. This is our reality in Azerbaijan.

So how does this all connect to a new Torah at the Sinai Temple? Last year when I traveled to Los Angeles for the first time, I was often asked by my fellow Jews what the Jewish community in Azerbaijan needed. I had just one answer: A Sefer Torah for our Synagogue! I am glad that the Los Angeles Consulate General of Azerbaijan, who has strong relationships and a widening network of Jewish friends in California, conveyed this request to Rabbi David Wolpe of the Sinai Temple, who later told this broader story of our history in Azerbaijan to his congregants. The Sinai Temple immediately recognized how big of a deal it is that Jews live in such a peaceful and hopeful way in a Muslim country. The energy and hard work leading up to the Torah Dedication, was so magnificently holy and inspired, it could only happen at a place called Sinai. The Rabbi spoke of our story on Shabbat, and like a flash, we were brought to Los Angeles to receive the Torah. 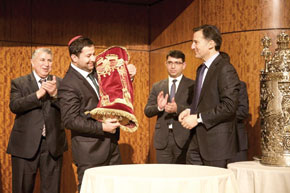 This magnificent gift and gesture was inspired and realized by the Sinai Temple Men’s Club, a group of visionary congregants led by Cary Lerman; the type of people that are here to change the world. As true leaders, they shone a light on something that represents hope, and from there, took direct action and brought to life something beautiful and lasting. That hope is built on our story, that Jews actually can live with respect, and even love, in a Muslim country. Just the fact that Azerbaijani Muslims wholeheartedly facilitated this Torah donation from one Jewish community to the other speaks volumes about what Azerbaijan stands for. This inspiration could change the world.

Yes, it was an experience of true grace, that in such dark times for Jewish people across the world something as elevated and positive could occur, bringing Jewish communities together across thousands of miles to celebrate friendship and the most lasting connection between all Jews, our Torah.

The Torah anchors all Jewish people across geography and culture, and the gift we have brought back to Azerbaijan is nothing short of priceless. The Los Angeles Sinai Temple’s most meaningful act of friendship embodies the epitome of hope and the shared Jewish-Azerbaijani dream of tolerance and peace. As I watched the world become smaller and smaller from thousands of feet above land, returning to my Jewish home in Azerbaijan, I felt a sense of possibility and inspiration as occasion for this trip. The values and momentum of this celebration are part of something much larger than one night or even one Torah; a movement to bring together all Jews and Muslims, across all global communities, so that we may one day truly exist as one world family, no matter the language or distance or differences between us.

About the author: Milikh Yevdayev is head of the Mountain Jewish community of Azerbaijan.