When publishers turned Feride Buyuran away saying her idea was just too niche, she decided to launch an Azerbaijani cookbook herself. After seven years’ hard work, propelled by her passion for her homeland, she’s finally done it. Here, Feride encourages us to cook the unfamiliar with her new book, Pomegranates & Saffron.


I don’t consider it just a cookbook, says self-published author Feride Buyuran, her voice clear and bright. My aim wasn’t to have just recipes. I wanted it to be educational. More like a small encyclopaedia about Azerbaijani culture through food.

It’s currently 10pm in Azerbaijan, 10am in California, USA, where 37-year-old Feride, originally from Baku, has lived with her husband since 2002. I can see her on Skype in a sunny orange shirt, big kitchen fridge behind. What I can’t see is the pile of boxes and wrapping that she’s surrounded by, with a new order to personally pack and ship of her newly released recipe book, Pomegranates & Saffron.

Pomegranates & Saffron is a huge 320-page comprehensive culinary journey to Azerbaijan, with recipes from a basic eggplant dip and yoghurt pancakes to the colourful and complex pilafs - the crown jewel of the Azerbaijani table - a celebrated rice dish with smoked fish, fava beans or sweet fruits and chestnuts, whichever takes your fancy. You can learn how to pickle your own garlic and plums, make sweet preserves from figs, cherries and watermelon rind, cook a hot pepper relish or can a fruit compote (drink) from summer fruits that will last throughout winter.

Having self-published the book in print, Feride has had to learn and do everything herself, from registering her trademark AZ Cookbook, to researching and testing the recipes, styling and photographing the dishes, and even colour-correcting the final pages. Now it’s on sale, she will have to market it too. I was nervous and stressed out but there was no going back, she confides.

If you have lived in Azerbaijan for any length of time you may already be familiar with Feride, through her blog AZ Cookbook (AZ because it’s short for Azerbaijan, while exploring an alphabet of other cuisines), at azcookbook.com. She has a BA degree in English Philology from the State University of Languages in Baku and an MA in English Literature from the same university. After moving to the States she received an MBA from California State University, Long Beach in 2005. She worked as a marketing specialist and then as a project manager for local companies – the latter as she was writing the book and blogging at the same time. I will not do that again! Feride laughs – she left to concentrate on her publishing ventures.


Her blog readers readers are mainly Azerbaijanis who live abroad: They reconnect with their motherland through the blog – they say it brings back memories. Non-Azerbaijanis read it too: people who have had some connection with the country at some point and want to stay connected, and believe that food is the best way to do that, which I also believe to be true. Even parents with children adopted from Azerbaijan, for example, turn to the blog as a method of learning about the culture.

I started the blog as I really like to interact with people. I’ve met so many people this way, which I may not have done just through writing the book. I didn’t know there were so many Azerbaijanis in the US.

Not only that, the blog has allowed Feride to gauge readers’ reactions and discover what sort of recipes prove popular in compiling her book. It also serves as a PR tool: I didn’t think about it, but the blog does now help to market the book. A lot of people who bought my book are people who read my blog, they know my style; but they are still two completely different projects.

What’s inside? Open the first few pages of Pomegranates & Saffron and you will meet Feride – a warm, welcoming preface to where her passion for food began (aged 14 compiling a recipe notebook) and why she decided to create this book - I never found a guide to the food of my own homeland – and an invitation to keep turning the pages and make yourself at home in the kitchen with her.

The book is stuffed full of information even beyond the kitchen, including traditional Azerbaijani hospitality and table etiquette, along with special days and feasting traditions, like the new year celebration in March called Novruz. There is also a scattering of Azerbaijani words of wisdom and proverbs throughout: When a cat cannot reach the meat, he says it was rotten anyway, and You can’t make pilaf from words – you need rice and butter. Each one adds sentiment to your cooking experience.

I wanted every dish to tell something new, for example where it came from, how it originated, the way it is eaten, the occasions it is eaten at, the etymology of the word. One of my readers said: ‘Don’t call it a recipe book, it’s a culture book’. I thought, Yes! That was the goal. .

From the birth of the idea in 2007 (two months before Feride’s second child) it’s taken seven years to get to this point, collecting recipes, quantifying them, testing and refining them. You know how Azerbaijanis share recipes: two kilos of meat, a bit of salt, add as much as you need, cook for as long as you want... Feride needed to add exact measures and structure, which took endless testing, but still advises that you trust yourself and allow your senses to guide you, and experiment like Azerbaijanis who take pride in their sense of taste.

I’m not a chef, Feride points out, I’m a home cook. A lot of Azerbaijani women don’t cook until they get married. The majority eat home-made, mum-made food – my mum even packed my lunch for me, aged 22! – I was one of those women. My parents preferred me to study. That was fine with Feride, who wasn’t really dying to spend time in the kitchen at that point, making only the odd appearance when there was a celebration feast to prepare.

Despite filling a gap in the market, unfortunately the idea was just too niche for publishers in the States to take the book on, so, Feride thought, Hey, I’ll just do it myself. That’s when a new chapter in her life opened. Azerbaijani national oil company SOCAR, and their legal division Practical Solutions Group shouldered the majority of the financial burden, which included the designer in Ukraine and the printer in Turkey forming cogs in what became an international wheel. Every single step was a challenge and a learning curve.

I selected recipes that were well-known to people coming to Azerbaijan, like dolma (stuffed grape leaves) and kebabs, and I wanted to dedicate a portion to regional recipes, like the pomegranate with eggs, which originates from Salyan along the Kur River. You can also try Sheki-style spiced sweet bread with coriander, cardamom, ginger and fennel, or Quba-style filled sweet breads with a fine sugary crumb centre, Qakh-style pleated dumplings with ground meat, or butternut squash half-moon dumplings from Balakan, for regional variations of popular Azerbaijani dishes.

I chose them thinking they would be more appealing to the reader – which ones would a foreigner be more likely to make? From the North, East, South, Karabakh… I wanted to give a glimpse of their food culture.

Feride started collecting more recipes to add to her childhood collection: My mum gave me hers, I asked friends, neighbours, relatives. I would ask people who lived in the regions to share their popular regional recipes. I made phone calls, I wrote letters. I had more than 200 to start with!

I, however, was starting off with a handful. I invited some girlfriends over and first we had eggplant kuku with red onion and walnuts. Concerned though I was that the brown ‘omelette’ wasn’t very visually appealing, it didn’t stop anyone going back for seconds. We also had half moon dumplings with walnuts and cinnamon following a super-easy master pasta recipe. I can’t believe you made your own pasta! said one. (Neither could I.) They were accompanied by a very strong garlicky yoghurt dip, which got a huge thumbs up, and a quick and easy chopped vegetable salad decorated with coriander and purple basil.


On the second attempt I upped the difficulty and made a tasty walnut and pomegranate stuffed chicken, alongside beautiful plov with delicate, separated rice and lavash crust – the most successful crust I’ve made to date.

I admit it all took a fair few hours, but Feride’s personality and enthusiasm fly off the pages and spur you on, giving you confidence to dive into the recipes and try something new. It’s a well-written, inspiring and detailed introduction to a new cuisine. The explanations of each dish give meaning and connection with your food, with a glossary and quantity conversions at the back meaning you don’t have to rely on your phone or the Internet – everything you need is there.

Everything, except for a meat grinder... and it’s highly unlikely that I’ll create a wood fire to smoke any vegetables when required. But that’s precisely where the book holds tightly to its intent: to share the culture and flavours and traditional cooking methods of Azerbaijan.

Award-winning foodie magazine Saveur listed AZ Cookbook among the 55 Great Global Food Blogs, Feride’s recipes have been presented in various magazines, she has been interviewed on countless food blogs, appeared on radio in Washington and Vancouver, and is now making waves both in Azerbaijani and American media as the first Azerbaijani cookbook to be published in the US. So, is there anything left for Feride to accomplish?

I plan to be in the food writing industry, so to speak. I may write another cookbook... I would like to have a TV programme! Maybe it’s a little far away but I’ve thought about it.

Lots of people think that Feride is obsessed with cooking and spends a lot of time in the kitchen, but she assures me that’s not the case. For a start, she loves flamenco dancing to shake off the stress of hard work. Career-wise she tells me I also like to research food and write about it, I would like to write books that aren’t only recipes. They are my dreams for now. If they come true I will be very, very happy.

Where can I get a copy?

Everywhere else: via Feride’s blog azcookbook.com and amazon.com

A Recipe from Feride’s Blog, azcookbook.com

My ancestors are from the city of Ordubad in Azerbaijan. Even though neither my parents nor my sister and I were born there, we have been influenced by the food of that region immensely with authentic recipes from Ordubad having been passed from generation to generation in our family. The following recipe of a hearty and tasty stew is one of those dishes. It is based on my Ordubadi grandma Sakina’s authentic recipe. In Ordubad beans, both dried and fresh, are especially popular. Traditionally, beans are slow cooked with govurma (lamb fried in its own fat and stored in buckets for winter), then added to the stews and soups. I don’t have the luxury of using govurma in my recipes, so mine is a simplified version of the stew. Dried mint leaves and sour prunes are used to add that special flavour to this delicious dish. 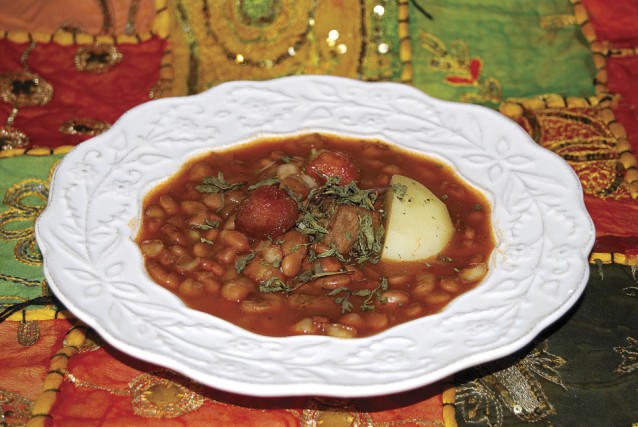