Sport
by Jo Burge
30630
When it comes to golf, Azerbaijan is late to embrace this club and ball sport, which has been taking off at various rates in other CIS countries. But with a new luxury course, international tournaments and the hunt for a national golfing sensation, it plans to make a sparkling entry over the next few years, as Visions’ Jo Burge went to find out. 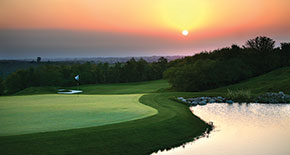 A dusty construction site in the Bina district by Heydar Aliyev International Airport is giving rise to an opulent, professional 170-acre championship golf experience - Dreamland Golf Club (dreamlandgolfclub.com). Baby grass shoots cast a green glow over the sand-sculptured course as more olive trees are replanted adding texture to the scene. But golf is hardly a nationwide passion, in fact, it’s virtually unknown in Azerbaijan, and with millions of pounds being fed into the wonder-project, there is perhaps another wonder on the horizon: how will the game evolve?

A TALE OF TWO COURSES

Dreamland is just one part of a nationwide target to position Azerbaijan as a premier golf destination and future prime contender in international tournaments. At the moment, Azerbaijan’s biggest golf lovers are its expats, and those keen to swing and putt head to the country’s other club, the National Azerbaijan Golf Club (tnagolfclub.com) in Quba.

The Quba-based club, which opened in September 2013, is a ruggedly beautiful site bordered by long grass and wild flowers with deep bunkers and a gently flowing creek. Designed by Jon Hunt of the UK-based International Design Group, it’s also backed by the global management and development company Troon Golf and offers a world-class academy with expert PGA-qualified instructors and state-of-the-art assessment technology.

Then, last year, from 31 July to 3 August, 156 golfers from 72 countries descended upon the course and teed-off for the PGA European Challenge Tour, battling it out for the €350,000 prize fund. In the tour’s 26-year history this was the first ever leg to be held in Azerbaijan and internationally televised, and to offer the first glimmer of the country’s hope for a bright golfing future. But is the message feeding down to the local community?

Predominantly we receive expats and just a small number of locals; more corporate entities than individuals, says National Azerbaijan Golf Club General Manager and Troon Golf representative Phil Henderson. Junior golf is where it really starts, though. Once the young ones are involved, the parents start to see their success and off the back of that the parents start. You just try to get a golf club in their hands. It is a new sport to the country so it’s a long-term plan of trying to turn non-golfers into beginners and then people who will play the game regularly.

Funnelling such junior talent is the job of the Azerbaijan Golf Federation. It was established in 2012 to bring the game to local people with the hope of identifying and developing Azerbaijani golf stars of the future. The Federation’s on-site academy offers a golf simulator, driving range, and putting green with both private coaching and group lessons for up to 14-15 children. President Ilham Aliyev initiated the Federation since golf became an Olympic sport in 2012 and the plan is to find Azerbaijan’s answer to Tiger Woods. 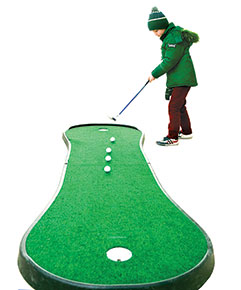 The project encourages local coaches from the Golf Federation’s National Academy to take golf equipment into schools, introducing the sport to hundreds of students aged 6-18. Interested students are invited to the academy in Baladjari district, 9km along the Sumgait Highway from Baku. There they benefit from 14 weeks of free coaching whilst learning more about the sport, its history, traditions and etiquette. This all takes place in English so the children improve academically too.

In November we will select our first ever Azerbaijan National Boys and Girls Golf Teams who will receive extra training to develop their skills during the winter. It’s an exciting time for Azerbaijan Golf and especially introducing hundreds of young children to such a great sport to find our own Rory McIlroy or Lydia Ko, says Scottish golfer and Flames Golf head coach Spencer Henderson.

The one to watch right now is Kamran Zeynalov. Aged 22, he is studying Applied Golf Management Studies at the University of Birmingham and made his debut competition appearance at the Quba Open last year. Because he is studying we don’t want to push him too much, but we will try to do something with him in the future, Nigar explains, before adding some comments on the key trends and challenges in the golf industry at the moment: the trend in the world, [Nigar learnt] through reading articles, shows that golf is getting younger because business is getting younger. Another thing is that the golf clubs are not able to keep all their members because of the rising competitive market. Every country is building golf clubs.

IN THE FOOSTEPS OF KAZAKHSTAN

That includes countries in the CIS where golf is considerably more developed than in Azerbaijan. A non-existent game before the collapse of the Soviet Union in 1991, it began to appear soon after and now there are around 30 golf clubs with a minimum of nine holes in the region. Russia hosts more than half of these facilities, Ukraine has five golf clubs, Uzbekistan and Kyrgyzstan have one each, built in 1998 and 2002 respectively, while Belarus and Georgia opened their first clubs around the same time as the National Azerbaijan Golf Club, much later in 2013.

Back at the end of the millennium, Kazakhstan even experienced something of a golfing frenzy. It began with President Nursultan Nazarbayev’s newfound love for the sport, kindled during a visit to the USA in 1994. Two years later the Nurtau Golf Club in the capital Almaty was built and boasted 300 members after just six months. A decade later the country has a total of five golf courses all going strong, attracting a predominantly Asian market with golfers travelling from China, Japan and South Korea. Last year the country celebrated a decade of hosting the Kazakhstan Open golf competition.
Can the same happen in Azerbaijan?

WITH HELP FROM IMG

To make sure it will, the Dreamland project has brought in IMG, the global leader in sports fashion and media, which lends its expertise in all areas of golf from premier talent management to award-winning course design and management and global media distribution. On top of that, Dreamland itself is not holding back in splashing out on world-class facilities from leading brand golf equipment and golf carts with GPS screens showing course distances, to ball motion technology for precision swing assessment in the modern Academy, offering nothing but the best for discerning golfers.

President Ilham Aliyev visited Dreamland on 12 January, toured the site in his own personal golf buggy and was presented with a personalised set of golf clubs and other equipment along with traditional golfer’s attire including golf shoes. All items will be kept safe at the club, where he can entertain and be entertained at the VIP clubhouse, which has a private conservatory, terrace and prime view of the course.

But Azerbaijan is still so new to the golfing scene – isn’t all this time and money spent a bit of a risk? IMG Director of Operations Russell Hannah explains it’s not: The development of golf across Russia and the CIS states can largely be attributed to a burgeoning group of people who are demanding a new way of living and who place greater emphasis on relaxation and recreational activities. As such it is no coincidence that most of the new developments in the region have been part of wider residential developments where golf is just one component of a healthy, active lifestyle.

Baku is now firmly recognised as a dynamic, aspirational city. The forthcoming European Games and commitment to Formula 1 is testament to this and illustrates the ability of sport to engage and capture the imagination of the local community and act as a vehicle to create global awareness and recognition. 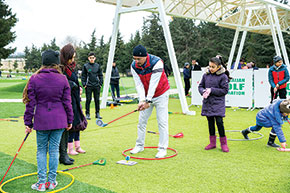 If that is the case, these perceptions are weakening. Nigar from the Azerbaijan Golf Federation asserts that the game now has a broader market due to its new affordability: Before it was more exclusive, now there are clubs in Turkey and the Middle East making golf very accessible, much cheaper, with good weather and service. Nigar says it’s important that the traditional typecasting of golfers is shaken off in order to embrace young potential golf stars, and Russell from IMG agrees: It is vital that golf remains open and accessible to everyone. We are committed to working alongside the Azerbaijan Golf Federation to achieve this and developing and nurturing local talent will be one of the key focuses of Dreamland Golf Club

Phil at the National Azerbaijan Golf Course is supportive of this approach and believes Azerbaijan’s two golf courses can complement each other: Naturally Dreamland will take some of our customers at first, he says, but overall it will help to build the game. Quba will remain the Baku retreat, cool in the summer with fresh clean air and no noise. We look forward to a great 2015 season of golf at both courses.

It’s clear that both clubs and the Federation are united in one joint mission: to make golf available, fun and recognised as a sport in Azerbaijan. This year, the National Azerbaijan Golf Course will launch new membership packages for 2015 along with stay and play packages with the fabulous Rixos Quba country resort (www.quba.rixos.com) and various member and amateur events, Dreamland will open nine holes of its project ahead of the European Games before showcasing the complete 18-holes with its official launch later this summer, and the Federation will continue to introduce and establish the sport in its most fundamental form across the country. There is so much potential, so much hope, and perhaps soon, so much golf in Azerbaijan.

Want to practice your swing in the city centre? These two sports clubs have simulators and projection screens so you can play a round of golf as if you’re really on the fairway. 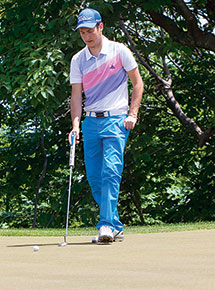 The Landmark Hotel, 90a Nizami Street, Baku AZ1010, thelandmarkhotel.az
Tee off at this indoor golf simulator featuring three infra-red ball tracking sensors, hitting mat and screen displaying a view of the game recreating the conditions of a real course.
Open 6.30am – 10.30pm Monday - Sunday
Price From 20AZN per session (hour, 1-2 people)
To book a session call +994 12 465 2000

Port Baku, Neftchilyar Avenue, AZ1010 Baku, theclub.az/en
Practice your swing with this 150-degree display PGA TOUR SimSurround simulator, the only of its kind. The tracking and graphics technology creates the most immersive play experience.
Open 12pm-9pm Monday-Sunday
Price From 40AZN per session (1 hour, 2-4 people)
To book a session call +994 12 499 8909