A review by Alum Bati

For most people, Thor Heyerdahl (1914-2002), the Norwegian ethnographer, is best known for the Kon-Tiki expedition. An intrepid explorer, Heyerdahl sought to show that people from South America, sailing on balsa-wood rafts, could have settled Polynesia long before the ‘discovery’ of America by Christopher Columbus. Heyerdahl’s documentary of the voyage won an Academy Award in 1951 and a more recent film dramatization was nominated for an Academy Award in 2012.

The Kon-Tiki hypothesis was controversial enough but much less known is that in the last few years of his life, Heyerdahl was propounding an altogether more remarkable theory.

Few would be surprised to learn that the Vikings, who beat Columbus to America by about 500 years, reached as far as the Caspian Sea. They were the great seafarers and traders (and much else besides) of the early middle ages. That the Vikings raided and traded in the area known today as Azerbaijan was only natural. But Heyerdahl provocatively turned the whole notion of visitor and visited on its head. He wanted to explore whether in fact the Vikings had their origins in the ancient Caspian region.

Not unnaturally, that hypothesis caused a stir of excitement in Azerbaijan and there resulted, in 2011, a conference in Baku on Thor Heyerdahl and Azerbaijan. This lavishly illustrated book is essentially a collection of the papers presented by many of the scholars at that conference as well as some additional material. It has all been carefully edited by a Norwegian scholar, Vibeke Roggen of Oslo University, who has devoted many years and considerable energy to helping improve educational standards at Azerbaijan’s universities. 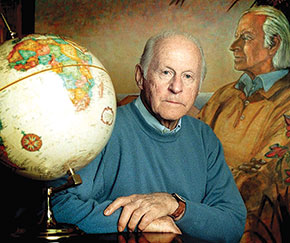 The book is divided into three main sections, the first and second parts largely being a homage and tribute to Thor Heyerdahl, the scientist, the explorer, the writer; a man of extraordinary energy and vision. The greater and more original part of the book, however, is the third section which deals with Heyerdahl’s hypothesis about migration to Scandinavia of a tribe from a region east of the River Don, including the Caucasus.

Heyerdahl speculated that Odin, commonly thought of today as a mythical Norse god, was a historical person who founded the Norwegian-Swedish royal dynasty. For this, he relied on a 13th century work of myth and history attributed to Snorri Sturluson, an Icelandic chieftain. Sturluson seemed to be saying that a chieftain of the name of Odin from the land of Aesir, east of the River Don, migrated to Sweden. Heyerdahl conjectured that ‘Aesir’ might be Azer[baijan] and Odin might be a corruption of ‘Udin’ or ‘Uti’, an ancient people of the Caucasus.

Heyerdahl’s theory has come under attack from academics and a number of papers in this collection reflect this scepticism. But others, whilst not necessarily accepting the Heyerdahl hypothesis, nonetheless see Heyerdahl’s approach as provocative, visionary and seductive.

This book, emerging out of the 2011 conference is the first substantive attempt to build on Heyerdahl’s work. As with most conferences, the quality of writing and research is variable but it has a broad coverage. It includes the archaeological evidence, such as it is, a chapter on music and another on animal motifs. However, genetic evidence is not explored (except for a very short reference to DNA evidence from some ancient Norwegian skeletons). In 2011, that might have been a complex and expensive procedure but scientific developments in this area are moving fast. Perhaps this, more than any other available evidence, is most likely to help establish the credence of the theory. As a step in furthering investigation of Heyerdahl’s speculations, Thor Heyerdahl’s Search for Odin is a valuable contribution. Even more important, however, is the contribution it makes to the real intent behind the speculations. A theme running throughout Heyerdahl’s works is the contact, cultural exchange and migration of peoples over great distances. We shall probably never know for certain whether there were links between Odin and Azerbaijan but Heyerdahl’s speculations can hopefully lead to a better understanding of the respective histories and cultures of the peoples of Norway and Azerbaijan. This work is a useful contribution to this understanding.

About the author: Alum Bati is a barrister who has been living in Baku for over 21 years. He is also the author of Harem Secrets and Caravan to Paradise, a pair of historical thrillers set in Istanbul.

New findings show that Runes have been used in times BC.