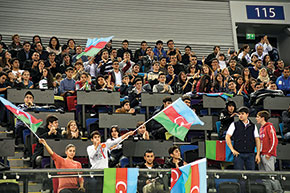 With only weeks to go till the Opening Ceremony the excitement is building in the run up to the inaugural Baku 2015 European Games. International Ambassadors have been named as faces of Baku 2015, new Official Supporters are delivering their unique products and services, and major international broadcast agreements have been signed to beam the Games into millions of homes, as the athletes themselves tailor their training regimes for a peak performance on the day of their competition.

On Thursday 19 March President Ilham Aliyev and First Lady Mehriban Aliyeva purchased the first tickets for the Games using state-of-the-art ticketing software provided by Official Supporter Tickethour. This historic moment also marked the release of tickets on sale to the public for the 20 sports as well as the spectacular Opening and Closing ceremonies online at baku2015.com/tickets.

As well as online, tickets are also available to purchase at 12 City Ticket Outlets located at shopping malls, kiosks and McDonald’s restaurants throughout the city centre. Spectators who buy tickets online can also collect them there in advance. For the full list and to find your nearest outlet visit: baku2015.com/tickets/article/ticket-sales-city-ticket-outlets.html

On Wednesday 4 March and with 100 days to go until the Games begin, Baku 2015 announced their very affordable ticket pricing.

For children and teenagers under 16, tickets will be available for free to almost all competition events, when accompanied by an adult (aged 18+) with ID and a valid ticket for the session. Admission to events in the Heydar Aliyev Arena and National Gymnastics Arena, are generously priced at just 1 AZN for under-16s.

Adult tickets will range from 2 to 5 AZN depending on the competition round (for example preliminary or final), seat category and venue. The Opening Ceremony tickets are priced separately at 20 AZN, with Closing Ceremony seats costing 10 AZN.

Chief Operating Officer of Baku 2015 Simon Clegg said: I am very proud of our ticketing policy announced today, which will allow us to share the experience of the European Games competitions with the widest possible audience, including families. Baku 2015 is focused on Europe’s athletes and their commitment to sporting excellence, and bringing the inspiration they provide to the public. To find out more details of admission prices go to baku2015.com.

The momentous ticket release took place as Baku reveled in the annual Novruz festivities, celebrating the arrival of spring, which this year featured a sporting twist with many of the Games’ sports being showcased on the Boulevard. Baku’s residents were able to learn more about the 20 sports included in the Games and have a go at some of them themselves at interactive demonstration stands. Celebrations came to an end with a colourful 3D display projected onto Baku’s Museum Centre, which blended sport and Novruz traditions and marked the release of tickets online. 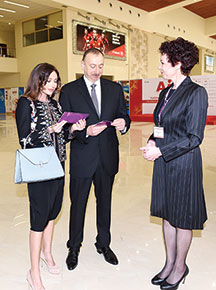 A common Novruz tradition is to plant trees to symbolise rebirth and a fresh start to the year ahead. This year, the tradition was given a special Baku 2015 flavour when the Baku 2015 European Games Operations Committee and the Azerbaijan Ministry of Ecology and Natural Resources clubbed together to plant more than 1000 new trees in early March as part of initiatives designed to give Baku 2015 a lasting green legacy.

The pomegranate, oak, elm and pine trees were planted in the Mushuigabad district to the west of Baku and should grow together to form a forest. More than 300 Azerbaijani and international BEGOC employees assisted in the operation, along with ‘Flamekeeper’ volunteers, Vice-President of the Olympic Committee of the Russian Federation Igor Levitin and Azerbaijani Minister of Youth and Sports Azad Rahimov, who said:

The Baku 2015 European Games will be a defining moment in Azerbaijan’s history, and will have a great impact on the country and its people. We often highlight the human and infrastructure benefits that the European Games will bring Azerbaijan, and today we can demonstrate that they will also leave a green and sustainable legacy for Baku.

The Baku 2015 European Games medal designs were unveiled on 4 March, which marked 100 days to go until the Opening Ceremony. The gold, silver and bronze medals have been designed to reflect the beauty and cultural diversity of Baku and feature the Baku 2015 logo on the front and the European Olympic Committee’s emblem on the back.

The medals’ design is the result of a collaborative effort between American family-run fine jeweller Adamas, which also produced the Olympic and Paralympic medals for Sochi 2014, and Azerbaijani artist Nargiz Huseynova.

Since the last issue of Visions, Baku 2015 organisers have appointed several more international athletes as ambassadors to promote the European Games in their home countries, and as the faces of extensive marketing campaigns.

Being able to welcome further international Athlete Ambassadors of this calibre reflects the importance of this new event on the sporting calendar, said Chief Operating Officer of Baku 2015 Simon Clegg. I am sure both Dimitrij and Vassiliki will very much enjoy promoting the Games and playing an important role in the development of European sport. 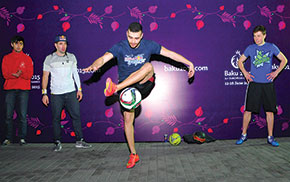 For more on the Azerbaijani Athlete ambassadors, read our interview with up-and-coming mountain biker Murad Sultanov, which follows on page 42.

On 16 March 2015 UNICEF and the Baku 2015 European Games Operations Committee announced a pioneering partnership designed to help young people in Azerbaijan by encouraging them to take up sport and by creating a forum whereby young Azerbaijanis can discuss the importance of sport in their lives. The partnership is also designed to ensure a social legacy for the first European Games.

The project encompasses 21 districts of Azerbaijan, where adolescents will channel their ideas on how safe and inclusive sport can improve their lives via online consultations. These ideas will then form the basis for a National Adolescent Consultation on Safe and Inclusive Sport scheduled to take place on 10 June in Baku, two days before the start of the Games.

UNICEF Regional Director for Europe and Central Asia Marie-Pierre Poirier said: The Games provide us with a great opportunity to discuss the right to safe and inclusive sport for Azerbaijani boys and girls, and the role of sport as a tool for the inclusion of the most disadvantaged children and adolescents. 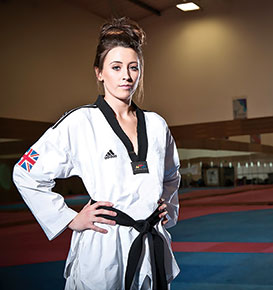 Croatian football great Robert Prosinečki is one of the few footballers to have played for both Barcelona and Real Madrid. He is currently the manager of the Azerbaijani national team and he recently teamed up with another former football star, Frenchman Kristian Karembeu, to make the draw for the Baku 2015 beach soccer tournament, which will take place from 24-28 June at the Beach Arena near the Crystal Hall.

Beach soccer is one of the younger sports to be featured at Baku 2015 but promises to be one of the most exciting to watch, with many of the world’s best teams hailing from Europe. Russia won the Beach Soccer World Cup in 2013, with Spain as runners-up.

As a result of the draw, Group A features hosts Azerbaijan, Portugal, Switzerland and Ukraine. Group B comprises Russian Federation, Spain, Italy and Hungary. The first game will be between two giants of European football, Spain and Italy.

Head Coach of the Azerbaijani national beach soccer team José Miguel Mateus said: Beach Soccer is a relatively young sport, but it is increasing in popularity all the time. Azerbaijan hosted a great edition of the Euro Beach Soccer Cup last year, and with home advantage I believe the national team can have a very successful competition at Baku 2015.

The 2015 European Judo Championships were originally scheduled to take place in Glasgow from 9-12 April. Its incorporation into Baku 2015 ensures the Judo competition will offer qualification for the 2016 Olympics in Rio de Janeiro, along with another 11 of the 16 Olympic sports featuring in the first European Games.

The European Olympic Committees’ President Patrick Hickey said: This is wonderful news as we approach the final lap of our preparations for the inaugural European Games. The EOC has always intended for European Championships to become part of the European Games and this agreement indicates that our aim is coming true, even earlier than we had anticipated. I am sure other sports will follow suit at future editions of the European Games and that the event will become one of the main qualification routes for the Olympic Games. 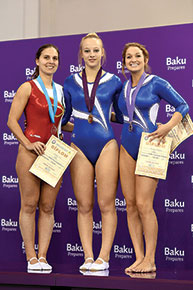 The event was judged to be an all-round success, with European Union of Gymnastics (UEG) President Georges Guelzec saying: This event marks an important milestone in what will be an exciting and thrilling Gymnastics competition at the first ever European Games. I am sure that with the support of the UEG and the Azerbaijan Gymnastics Federation, we will deliver a competition which will delight and entertain both athletes and spectators in Baku and TV spectators around the world. This event marked also the debut of a new competition format, combining different gymnastics disciplines in one competition based on the system of alternation.

The host nation produced plenty of impressive performances, including by Azerbaijani gymnast Oleg Stepko who took gold in the men’s artistic event and by teammate Kristina Pravdina who won the women’s event. Azerbaijan also won medals in the rhythmic, acrobatics, trampoline and aerobics disciplines.