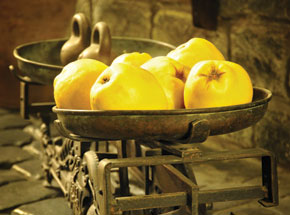 They dined on mince and slices of quince,
Which they ate with a runcible spoon;
And hand in hand on the edge of the sand
They danced by the light of the moon.
This verse from the The Owl and the Pussycat by English author and poet Edward Lear is one of the best-known references to quinces in English poetry. However, since Lear loved to make up words in his ‘nonsense’ verse, many readers over the years may have doubted that quince is indeed a fruit that can be eaten with mince.

Former editor Ian Peart, now a member of the Visions Advisory Board, had never tried quince when he lived in England, although he knew it from the Lear poem. He first tasted the fruit in Baku and found it fragrant and delicious. Over the years that he has lived in Azerbaijan, Ian has had the chance to visit other regions of the country and sample quince there. He says with certainty that the best quince he has ever eaten was from Ordubad in Nakhchivan, a part of Azerbaijan that borders Iran and Turkey and is cut off from the rest of the country. In Azerbaijani the quince is called heyva.

The quince gained its botanical Latin name – Cydonia oblonga – from Kydonia on the island of Crete. This is where the quince of old is thought to have been cultivated into the fruit as we know it today.

In terms of shape a quince is a cross between an apple and a pear, but larger and rather lumpy. It is a rich yellow on the outside and has a strong pleasant fragrance. Its paler flesh tends to be acidic and astringent, but a quince that has ripened in the hot sun of Azerbaijan can be enjoyed raw.

Growing five to eight metres high, the quince tree was cultivated for the first time in Azerbaijan 4,000 years ago. There are more than 400 varieties of quince. Nowadays they are grown in many Mediterranean countries, Latin America, Africa and Asia. The top producers are Turkey and China. It’s interesting that Azerbaijan is seventh among the countries where quinces are grown.

While British readers might be hard-pressed to find quince growing at home, the fruit was once well-known in Britain. Its name evolved from Cydonia through the French coing to coyne and then quince.

It is one of several varieties of fruit that have gone out of fashion in western Europe, but still thrive in Azerbaijan. Another is the mulberry. Both fruits are mentioned by early 17th century pastoral poet William Browne in Song V of his Britannia’s Pastorals:

Herewith (at hand) taking her Horne of Plentie
Fill'd with the choise of every Orchards daintie,
As Peares, Plums, Aples, the sweet Raspis-berry,
The Quince, the Apricock, the blushing Cherry;
The Mulberry (his blacke from Thisbie taking)
The cluster'd Filberd, Grapes oft merry-making. 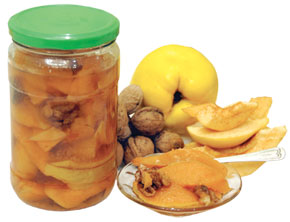 Fruit of love, marriage, and fertility

The quince is believed by many scholars to have preceded the apple. Ancient references to apples may, in fact, be references to quince, including the forbidden fruit in the Garden of Eden. Greek mythology associates the quince with Aphrodite, the goddess of love, and many believe that the golden apple given to her by Paris was a quince.

There are many associations with quince. The ancient Greeks related it with fertility, and it played an important role in wedding celebrations where it was offered as a gift, used to sweeten the bride's breath before entering the bridal chamber, and shared by bride and groom. These associations have resulted in the quince becoming known as the “fruit of love, marriage and fertility”.

With a right willing hand she gave me, hence,
The Stomackes comforter, the pleasing Quince.
Quince is also very good for asthma. The dried leaves of the quince are used to brew tea, which has a distinctive, cheering aroma.

Quince jam and other delights

Quince is popular in Azerbaijani cuisine, especially in jam and compote. Adults and children alike love quince jam. A spoonful of the delicious preserve in a hot glass of tea is a warming taste of summer on cold winter evenings. According to tradition, a pregnant woman who eats quince jam will give birth to a beautiful child.

Slices of quince add fragrance and a pleasing tang to Azerbaijani lamb or chicken stews or can be found slipped into cabbage dolma (stuffed cabbage leaves) or the water in which they are simmered. Quince too can be used for dolma. Stuffed with minced lamb or veal, chestnuts and spices, quince dolma are a delicious dish that combines sweet and savoury.

Quinces or heyva grow in almost every part of Azerbaijan, but some regions can be considered the home of heyva. They are Ordubad and Agdash. The perfume of an Ordubad quince lingers in a room for a long time. No wonder our colleague Ian prizes the Ordubad quince above all others…