Shooting for Gold in Qabala 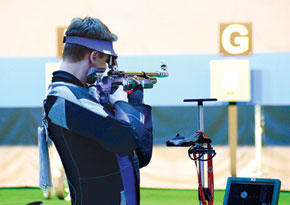 This year the International Shooting Sport Federation (ISSF) chose Azerbaijan as the location for its closing tournament of the season. More than 500 people converged on the scenic town of Qabala from 21 to 28 October 2014 for the Final Stage of the ISSF World Cup.

The tournament was organised by the Qabala Shooting Club and the National Shooting Federation with the backing of the Azerbaijan National Olympic Committee, the Ministry of Youth and Sports and the ISSF. The competition was broadcast live from the Trap Shooting and Archery Complex by the ISSF official TV channel.

Four athletes represented Azerbaijan in the Final Stage: Nurlana Jafarova and Emin Jafarov, both in skeet shooting, and Irada Ashumova and Ruslan Lunyov in the pistol event. The pistol shooters were the first to compete. Irada Ashumova, who won bronze at the 2004 Summer Olympics, was not at her best, coming 11th. Irada’s son Ruslan Lunyov did slightly better, finishing ninth in the 25m pistol event. Nurlana Jafarova just missed out on the final of the skeet shooting, coming seventh.

The best Azerbaijani performance came from Qabala Shooting Club member Emin Jafarov, who came fifth in the skeet event, at the same time setting a new skeet record for Azerbaijan of 24 hits out of 25. 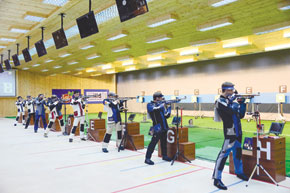 The competition was intense, as was to be expected with the world’s best athletes taking part. One of the most memorable contests was the Skeet Men’s final on the last day at Qabala. Jin Di of China faced off against Egypt’s Azmy Mehelba. When both athletes ended the series with a perfect score of 16 hits, the match went to a shoot-off. Jin Di and Azmy Mehelba matched each other hit for hit a remarkable 21 times, more targets than in the medal match proper. Then when Mehelba aimed for his 22nd clay, he missed. Jin hit his target to claim the gold medal and his first World Cup title.

At the closing ceremony, ISSF Secretary General Franz Schreiber presented diplomas and medals to the management of the Qabala sports and shooting clubs. He awarded a diploma of honour to the president of Qabala Sports Club, Tale Heydarov, for the successful organisation of the 2014 World Cup Final Stage and a Medal of Honour for his support of ISSF.

Franz Schreiber was delighted with the tournament and venue, enjoying in particular the wonderful view of the mountains and autumnal forests from his hotel balcony. He was pleased with the Qabala Shooting Club facilities for competitors, judges and spectators alike.

This year's ISSF World Cup Final has been a great success, the ISSF president said. The athletes gave their best at the end of an intense season, and we would like to thank the organisers of this event who set up an excellent shooting range. This new facility in Qabala will host a combined ISSF World Cup Stage next year, and we are looking forward to coming back here. 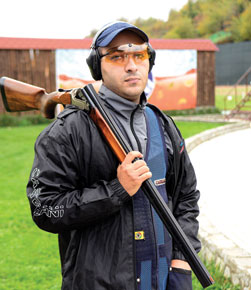 A member of the ISSF Technical Committee, Petros Kyritsis, was also full of praise: I've monitored all the progress made over the past year. I have to say that all the organisation is fantastic, especially the club, and the range which is one of the most beautiful ranges in the world.

Next year’s ISSF World Cup Stage in Qabala will have extra bite, as the athletes will be competing to qualify for the 2016 Summer Olympics. The tournament will be held from 6 to 16 August. Azerbaijani shooting fans don’t have to wait until the summer for the next tournament, though, as the second Heydar Aliyev International Grand Prix will be held in Qabala in May 2015.