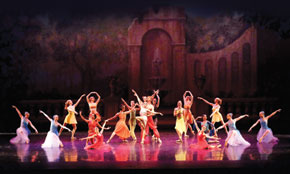 It’s an epic poem that has inspired Azerbaijani composers and choreographers. It became an on-stage ballet sensation and has travelled across Europe delighting international audiences. This year, it finally reached America. Dr Jamila Javadova-Spitzberg explores how Azerbaijani poet Nizami’s Seven Beauties got there.

1 October 2014, San Diego’s Civic Theatre, packed-out, nearly 3,000 people in rapturous applause: it’s the final curtain of the US premiere of Seven Beauties, a ballet born out of the motifs of Nizami Ganjavi’s poem, written way back in the Middle Ages, now receiving whoops and cheers.

Set in ancient Persia, it’s a story of multiculturalism and wisdom, about a young prince on his ethnically diverse path to becoming a worthy shah. But how did such a historical poetic work of the medieval Caucasus reach one of America’s top theatres and entertain a modern audience, through dance, 800 years later?

During the early Middle Ages, Azerbaijan was an important central point in maintaining trade relations between many nations and, consequently, it was a multi-ethnic hub of cultures and ideas. Among its cities, ancient Ganja, 340km west of Baku, stood out in particular. It was the birthplace of one of the greatest poets and most powerful intellects of Azerbaijani literature, Nizami Ganjavi (1141-1209).

Nizami’s views, ideas and beliefs took shape under the influence of the diverse and integrated society in which he lived. He praised emerging concepts in his epic works: Five Treasuries or Khamsa (Quintet), which includes the poems, The Treasury of Mysteries, Khosrov and Shirin, Leyli and Majnun and Iskandarname, not forgetting Seven Beauties.

In his poems, Nizami goes as far as calling himself an ikdish – a Turkish word for someone born of a mixed marriage. By doing so he was figuratively describing himself as “partly vinegar” and “partly honey”, an acknowledgement of his own heterogeneity. Diversity was a way of life for Nizami. Like Nizami, Qara Qarayev (1918-82), an esteemed Azerbaijani composer of the 20th century and distinguished student of Dmitry Shostakovich, integrated subjects, topics, art and music of various cultures from around the world. This includes works such as Albanian Rhapsody for symphony orchestra (1952); Vietnam, a suite for symphony orchestra (1955); The Path of Thunder, a ballet adaptation of a novel by South African writer Peter Abrahams (1958-59); and Don Quixote, symphonic sketches for orchestra (1960), based on the Spanish novel by Miguel de Cervantes. These works and many others exhibit Qarayev’s fascinations with the spirit and mood of distinct societies, their lifestyle and art.

It is no wonder, then, that in 1947 Qarayev decided to embrace Nizami’s poetry, so in tune was it with his musical mind. First he composed a symphonic poem, Leyli and Majnun. Later, in 1952, he turned his attention to Seven Beauties, the Azerbaijani ballet that would come to enchant audiences around the world.

In 2008, 56 years after its debut, a newly revised post-Soviet production was staged in Baku, choreographed by Vasiliy Medvedev in close collaboration with Yana Temiz, who worked on the libretto, conducted by Elshad Bagirov. Further afield, the Nizami-Qarayev poetry-music fusion was performed in Russia, Belarus, France, Sweden and elsewhere.

In 2011 Martin Kruming, an American lawyer from North Park in San Diego, California, with a Nizami-Qarayev-type love of diversity and multiculturalism, devoted his time to building a unique partnership: a neighbourhood programme twinning the Switzer Highland Community of North Park, San Diego, with its sister location, the Nasimi District of Baku. On 18 October 2011, a date that coincided with the 20th anniversary of Azerbaijan’s independence from the Soviet Union, a San Diego City Council member announced their union in culture, education and business. 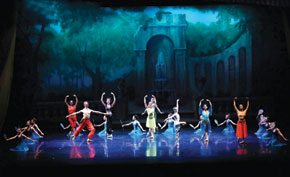 Encouraged by the audience’s reaction, Nasimi Aghayev, the consul general of Azerbaijan in Los Angeles, and Dr Tweed began exploring the possibilities of starting another project dedicated to the works of Azerbaijani composers. Qara Qarayev was an almost unanimous choice. His work, they said, “would speak to an American audience” due to its thematic diversity and fine storytelling. So, with the financial backing of the Ministry of Culture and Tourism of Azerbaijan, the US’s modern production of Seven Beauties began.

Award-winning choreographer and artistic director of the San Diego Ballet, Javier Velasco, was selected to lead the choreography. The Grossmont Symphony Orchestra, led by Dr Tweed, would perform the music.

The poem Seven Beauties is about Bahram V (Bahram Gur), the 15th shah of the Sassanian dynasty (224–651) of the Persian Empire. The poem unravels Bahram’s romantic adventures and love affairs with princesses from around the world.

Nizami tells stories on behalf of seven beautiful princesses who are unique and clever with a multicultural mindset. Initially, Javier Velasco was challenged with the complexity of choreographing a ballet that revealed a story of a prince falling in love with seven beautiful women from different countries. However, after visiting Azerbaijan, experiencing the culture, and holding discussions, he knew he had a unique opportunity to make history in America by staging a ballet of the legendary Qarayev, a work about ethnic diversity, charm, wisdom and sophistication.

Velasco and Tweed researched extensively. They read the entire English translation of Nizami’s epic, they listened to mugham, and watched two major, heavily-influenced Soviet productions from 1952, as well as the modern, extensively symbolic and philosophical 2008 Seven Beauties choreographed by Vasiliy Medvedev.

Both Velasco and Tweed strived to create an original production. They wanted to find universal elements that would play on not just the beauty of the women, but also highlight their intelligence, wisdom and their lessons taught to Sassanian ruler Bahram.

It is in the guise of seven stories (or lessons), as taught by a woman to a man, that we witness the maturation of the self-absorbed prince to shah (altruistic servant of the people) in visual detail – from Black to White, Darkness to Illumination, read the 2014 San Diego programme notes.

Thus, in the libretto, just like in Nizami’s poem, these women appear to be strong, profound, noble and knowledgeable, also caring and passionate, accomplished and intellectual.

Step-by-step the seven women guide Bahram through the phases and significant moments of maturity, by bestowing life-long lessons on patience, honesty, passion, serenity, faith and justice, finally elevating him to the level of enlightenment, of devotion to God.

With this fresh adaptation, Velasco built a stunningly elegant and exquisitely beautiful choreography by deeply weaving it into Qarayev’s composition. The genuinely unique, symphonic sound of Qarayev’s music, with its bounteous and spirited waltz, lyric and alluring adagio, shows strong ties with folklore, creating a rare listening experience. Along with the symbols and colours presented in the choreography, costumes and stage design, each lesson or image is assigned an individual ethnic melody, giving the listener major cues to identify those images. Between Velasco’s choreography and Qarayev’s music the ballet became a gratifying union of dance and music.

Bahram Shah was played by Russian-born Maxim Tchernychev, who has an impressive biography of performances, from the Bolshoi Theatre under the direction of Yuri Grigorovich to various opera and ballet theatres throughout America. His performance became a pivotal contribution to the success of this production. 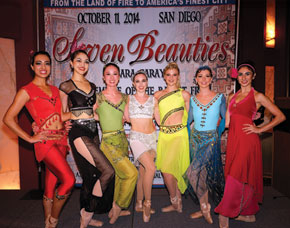 Philippe Bergman of the San Diego Ballet worked as lighting designer and technical director of the ballet. His role encompassed a fascinating blend of art and technology, which helped to shape the emotions of the audience and influenced the overall success.

Costume designers Marcia Averett, Sharmaine Perea and Beverly Stephenson researched ethnic elements from around the world that could be incorporated into their dance costumes. The Azerbaijani Consulate in Los Angeles loaned the ballet company some traditional garb, both men’s and women’s, to be used in the production.

From Nizami’s poetry to Qarayev’s music and to the American stage, the San Diego production of the Seven Beauties ballet encouraged acceptance, understanding, openness and connection. It became a genuine example of Azerbaijani culture in its promotion of awareness and the ability to work harmoniously with other cultures. In reflection of that, everyone in the production worked together in seamless harmony, from the orchestra’s first note to the final curtain on stage.

Who are the seven beauties?

The story is set in ancient Persia, where young prince Bahram is destined to become the 15th shah of the Sassanian dynasty. He is passionate about multiculturalism… and these women. He embarks on a love affair with each of them. What he doesn’t expect are the life lessons they teach him in return, elevating him to become a worthy shah with new power through knowledge and understanding – one that his status alone could never give.

About the author: Jamila Javadova-Spitzberg is an internationally performing organist. She is the first musician of Azerbaijan to hold a Doctor Of Musical Arts degree in organ performance (University of North Texas). Currently, she is a professor at the University of Texas in Dallas.