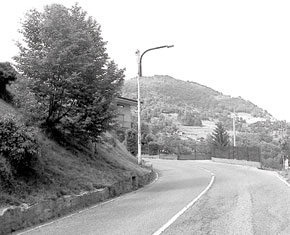 Carolina Letini witnessed the tragic deaths of 120 Azerbaijanis in the village of Monte di Nese, 20 km north of Bergamo in northern Italy. She broke down in tears whenever she spoke about it.

The battle began at 6 o’clock in the morning and lasted till the afternoon. The Azerbaijanis fought like heroes till the bitter end, but there were only 120 of them, and they were encircled by about 2,500 fascists. The terrifying events of 13 April 1945 are still remembered in Monte di Nese, where the people have erected a commemorative plaque in honour of the 120 Azerbaijanis. Although almost 70 years have passed since the event, the people of Monte di Nese pay tribute to those fallen heroes every year.

Azerbaijanis in Italy By 1945 thousands of Soviet soldiers were fighting on both sides in northern Italy. Most had been prisoners of war: some had opted to fight for the Nazis, others had escaped and joined the partisans. Almost 4,000 Azerbaijanis were in a division known as the SS Ost-Turkische Waffen-Verband (SS East Turkic Armed Formation), led by SS-Standartenführer Harun el-Raschid Bey. (Born Wilhelm Hintersatz, Harun el-Raschid Bey was an Austrian who had converted to Islam.) The Azerbaijani division was sent to the outskirts of Bergamo in early 1945 in order to fight against the partisan movement.

But nothing went as planned. The Azerbaijanis were unwilling to fight against the partisans. More than that, they joined the partisan troops at the earliest opportunity.

In other words, soldiers and officers were abandoning the division. One particularly large group of soldiers left for neutral Switzerland, successfully reaching the country through the Brembana valley. Others headed further towards Bergamo to join the partisan troops operating there.

At the time there was a powerful anti-fascist movement in northern Italy, especially in Lombardy province. The largest was the Garibaldi partisan brigade. Azerbaijani soldiers headed to Alzano Lombardo, near Bergamo, to join the Garibaldi brigade.

The Azerbaijanis spent a night in Monte di Nese.

We met 80-year-old Carolina Letini at her home in the village. We didn’t know who they were. At first we were frightened. They were terribly tired and hungry. They slept in the village. When their commander asked us where the partisans were so they could join them, we realised we didn’t need to be afraid of these people.

Local priest Father Severino Vitali wrote in his memoires: As they were afraid of being pursued by the fascists, they went on the run for a few days. They spent a night in the village. Locals allowed them into their houses to rest. It became clear that they wanted to join the partisans, after a couple of days’ rest.

Early in the morning of 13 April 1945, more than 2,500 fascists and SS soldiers poured into the village.

They encircled the village. They were shouting and asking where the Azerbaijani soldiers were hiding. But the villagers said there were no soldiers in Monte di Nese. They began beating the villagers cruelly to make them reveal their hideouts. A fascist called my father and said that they were going to search his house. My father replied that there was nobody at home but his little daughters. When the fascists entered, they saw an Azerbaijani soldier. He was a young man of medium height. The poor man was shot in front of the house. Then a woman named Giulia, who came from Alzano, approached one of the fascist officers and spoke to him in a low voice. It turned out that Giulia and her accomplices had exposed the houses where Azerbaijani soldiers were hiding. Soon the fascists began shooting fiercely at the houses. The village turned into a real battleground.

Maria Lechini was just seven at the time. She said that the Azerbaijani soldiers had fought heroically. They categorically refused to surrender. Those 120 Azerbaijanis resisted more than 2,500 fascists for six hours. Starting at 7 o’clock in the morning, the battle ended at noon. 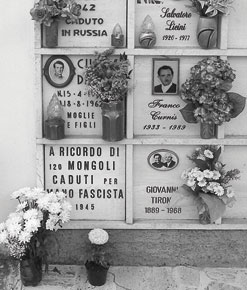 These events are studied and described by Mikhail Talatay in his book Dal Caucaso agli Appennini (From the Caucasus to the Apennines). He quotes from the memoires of parish priest Father Severino Vitali: The fascists collected overcoats, wallets and other personal items from the captives. Then the fascists ordered them to take off their shoes. Everyone was terrified. Were they going to shoot the Azerbaijani soldiers?

And then, it happened. The captives were brought together and, upon the order of a lieutenant, the fascists opened a barrage of automatic fire. They showed no mercy, even to the wounded.

Natale Mazzola, a partisan troop commander, wrote in his memoires that more than 900 Azerbaijanis had deserted from SS units. One detachment of 120 were shot in Monte di Nese. Three hundred people from another group were captured and their fate is unknown. The others managed to escape to Switzerland, helped by the partisans.

Carolina Letini recalled: Their corpses were left in the village for a few days. The fascists didn’t allow us to bury them. They didn’t even allow anyone to get close to them. They went away a few days later. And only then were the Azerbaijanis buried, at the request of the local priest.

Carolina showed us their graves, scattered in different places throughout the village. Mikhail Talatay wrote that the burial was organised by local resident Giovanni Gerardi in a communal grave near the village cemetery.

Yet, as Carolina observed, not all the Azerbaijani soldiers were buried in the grave. Most of them were buried near the cemetery, but there are other places in the village where you can also find their graves.

She said that the identities of most of the Azerbaijani soldiers were unknown, because the fascists had taken all their documents from their pockets.

In February this year, the Monte di Nese massacre was recalled in Italian newspaper Corriere della Sera, which quoted from historian Andrea Pioselli’s recent book La diserzione (Desertion). It said that the Azerbaijani soldiers had made contact with Italian partisans through two influential members, Pietro Morandi and Epifano Micheletti. The key intermediaries on the Azerbaijani side were Captain Aghamoglan Aghayev and officer Musa Mammadov as the latter knew “a little Italian”. It was thanks to their efforts that 250 Azerbaijani soldiers had joined the Italian partisans.

The group of Azerbaijani soldiers reached Monte di Nese, but before they could meet up with the partisans, the fascists had tracked them down. The clash at Monte di Nese wasn’t really a battle, it was a manhunt, historian Pioselli wrote. He said that the fascists had killed 118 Azerbaijanis in all, not 120: 43 died in a battle that lasted only a few hours while another two were fatally wounded and died soon afterwards. Seventy-three Azerbaijani soldiers were taken and shot: 54 near the cemetery, 11 near the church and eight in the Busa area.

About the author: Sabuhi Mammadli is a journalist with Lent.az website, part of APA Holding. He specialises in investigative reporting and reporting from conflict zones. His article about Azerbaijani soldier Nuri Aliyev, who fought with the Garibaldi partisans against the Nazis and married fellow partisan Gina, was published in the Jul-Oct issue of Visions and on our website visions.az.