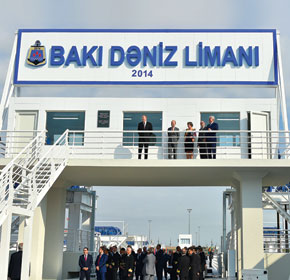 Oil and gas are Azerbaijan’s best known natural advantages, but they are not the only ones. The country’s location between east and west, north and south, makes it a natural hub for trade and transport. While caravans of camels once carried silk and spices from China and India across Azerbaijan to Europe, in the 21st century planes, trains, ships and lorries make that journey. With the help of Parviz Heydarov, Visions looks at how the Azerbaijani government is investing in transport infrastructure, with the new Baku International Sea Trade Port an essential link in the 21st century Silk Road.

Azerbaijan’s development concept states that by 2020 gross domestic product (GDP) will double thanks to annual growth in the non-oil sector of 7-8%. A decisive factor in achieving that growth will be income from trade and transport, much of it passing through the new Baku International Port.

As Baku bay provides the finest natural harbour in the Caspian Sea, the city has had a port for centuries. The commercial port, located at the eastern end of the seafront boulevard, was built in the early 1930s. Although it has had upgrades since then, the port is limited by lack of space to expand and by distance from the main road arteries. Freight lorries would have to pass through Baku’s congested roads to reach the intercity highways. Add to those disadvantages plans to remove heavy industry from the city centre and to create a modern urban waterfront and relocation becomes the obvious solution.

The decision was taken to build a new port at Alat (Ələt), some 70 km south of Baku. The location is ideal for access to the main north-south and east-west highways and railways and the new Baku-Tbilisi-Kars railway, under construction. Moreover, it adds little to the voyage time for ships plying the main routes across the Caspian. 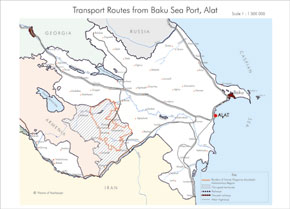 On 18 October 2007, President Ilham Aliyev signed a decree on construction of the Baku International Sea Trade Port at Alat. The Ministry of Transport entrusted complete design and engineering services to Royal Haskoning, an experienced project management and engineering company headquartered in Holland.

Three years later, on 3 November 2010, President Aliyev laid the foundation stone for the new port complex, which is to cover 400 hectares.

The project is divided into three stages. The first stage, part of which is now complete, includes dredging works and construction of the ferry terminal, dry cargo terminal, container terminal, road, rail and other infrastructure.

Dutch company Van Oord was responsible for dredging a navigation channel 7.5 kilometres long, 160 metres wide and seven metres deep and a turning basin 450 metres in diameter. This allows all types of ships navigating the Caspian Sea to dock at Alat. Azerbaijani open joint-stock company Evraskon (formerly Azerkorpu) prepared the land for construction and designed and built the road infrastructure linking the port to the Baku-Alat highway.

One berth 175 metres long and 12.5 metres wide can receive two ships at a time, and is high enough to cope with changing water levels. Two 79m railway berths and a service berth have also been constructed. A marshalling yard with five railway lines, state-of-the-art navigation and communication systems, a highway, tunnel, and other infrastructure and communication facilities and installations are ready for use.

More than 2,000 people, most of them locals, are involved in building the port. Construction continues of a roll-on/roll-off (ro-ro) quay, dry cargo and container terminal consisting of four quays, as well as a repair base, waiting rooms, depots, border and customs checkpoints and other facilities. The port complex should be completed by the end of 2016.

The project includes a logistical centre, which will initially be able to handle 100,000 containers. The logistical centre is supported by the TRACECA (Transport Corridor Europe Central Asia) project, an intergovernmental body seeking to promote integrated transport along the old Silk Road. 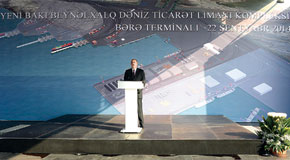 On 22 September this year, President Aliyev opened the ferry terminal. Today the first part of the first phase of this great port is being put into operation. The first phase will be completed in full in the coming year, the president said at the opening ceremony.

The port will have the capacity to handle 25 million tonnes of freight and one million containers. That means the Alat Trade Port will be the biggest port in the Caspian. Construction of this port will further deepen co-operation in the Caspian Sea.

President Aliyev watched the loading and dispatch of the Barda and Azerbaijan cargo ferries. The ferries’ main routes are between Baku, the port of Aktau in Kazakhstan and Turkmenbashi in Turkmenistan.

Azerbaijan is open to investment. Thousands of foreign companies work in Azerbaijan, win and fulfil state contracts. The main demand we make of the foreign companies is quality and state-of-the-art standards. That is what we can see here.

The new port will connect with the new railway under construction from Baku to the Georgian capital Tbilisi and eastern Turkish city of Kars. As President Ilham Aliyev said: Azerbaijan’s favourable location affords us the opportunity to expand our transit capacity even further in future. The east-west and north-south corridors pass through Azerbaijan. But if there is no modern logistics and transport infrastructure here, we will not be able to benefit from these opportunities. That is why the Baku-Tbilisi-Kars railway is under construction… For the first time Azerbaijan will be linked by rail with Europe. Azerbaijan will be a railway bridge between Europe and Asia.

Baku-Tbilisi-Kars will initially carry 10 million tonnes of freight, expanding to eventually take 20 million tonnes. It will connect not only Azerbaijan with Europe but central Asia and even China, creating a Silk Road for the 21st century.

Model of the new Baku Sea Port at Alat

Plans have been announced to build a new airport at Alat, which will handle freight from the port and logistics centre and passengers for whom it is more convenient to fly to the south of Baku, rather than the north, the location of the city’s Heydar Aliyev Airport.

When the president mentioned shipbuilding, he was referring to the new Baku Shipyard, which he opened on 20 September 2013. The yard, close to the port at Alat, is designed to build subsea vessels, tugs, offshore support ships, tankers and cargo vessels. It will allow Azerbaijan to manufacture its vessels at home, rather than buying them abroad. State oil company SOCAR has five tankers and five cargo ships on order from the yard. The shipyard has also won orders from Russia and from BP to design and build a subsea construction vessel to work on phase 2 of development of the Shah Deniz gas field.

With the port and other infrastructure due to be completed in two years’ time, just one factor remains for the success of Azerbaijan’s 21st century Silk Road: securing more business. It was reported earlier in the year that Kazakhstan, Turkey and the United Arab Emirates have already expressed interest in shipping cargo through the new port.

President Aliyev summed it up in his speech at the opening of the ferry terminal: A carefully thought-out tariff policy must be introduced here so that our partners send even larger quantities of freight across Azerbaijan and we can reap the benefits.