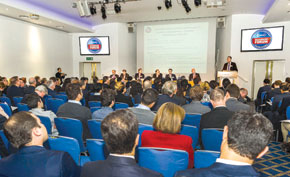 The dramatic fall in the oil price in November and December 2014 is a striking reminder of why hydrocarbon-producing countries need to diversify their economies. Reducing dependence on oil and gas has long been a priority of the Azerbaijani government.

Speaking at his inauguration ceremony after re-election in October 2013, President Ilham Aliyev said: I think that giant strides to diversify the country's economy have been taken over the past decade, and this policy will continue… We must strive to ensure that our non-oil economy will double over the next ten years. This goal was set a year ago and I think we have the capacity to achieve it.

The European Azerbaijan Society’s fourth business forum, held in London on 5 November 2014, took as its theme Economic Diversification is the Key. And it was standing room only as more than 300 diplomats, politicians and decision-makers packed into the venue at 4, Hamilton Place, Mayfair.

Shahmar Movsumov, executive director of the State Oil Fund of Azerbaijan, aptly summed up the country’s economic potential at the forum: Azerbaijan has achieved great political and macroeconomic stability, and these remain pillars of our development. The catalyst for Azerbaijani development was the signing of the ‘Contract of the Century’ with a BP-led consortium 20 years ago. The Azerbaijani economy has tripled during the past decade. We anticipate around seven per cent annual GDP growth during the next five years, much of which will be generated by the non-oil private sector. Diversification has been declared a priority for the country by the Azerbaijani government.

While oil and gas is unarguably the mainstay of the Azerbaijani economy, the chairman and founder of TEAS, Tale Heydarov, cited a perhaps surprising statistic: The hydrocarbons sector currently employs one per cent of the Azerbaijani working population, and that is why we try to focus on other sectors at the TEAS Business Forum.

A sector highlighted by the TEAS chairman as rapidly developing was financial services. He said the industry in Azerbaijan would benefit from the expertise offered by the City of London.

The importance of the sector was echoed by Lord Risby, the UK prime minister’s trade envoy and vice-chairman of the All-Party Parliamentary Group for East Asian Business, who told the forum: Azerbaijan deserves to be the focus of attention and investment. There are great opportunities in the financial services industry. During the recent downturn, Azerbaijan remained unaffected, and stability of the economy has been recently reaffirmed by Fitch Ratings. There is a programme of improvement across the regulatory structures of the financial services industry in the country and there are great opportunities for collaboration between UK and Azerbaijani banks.

Banking was also on the mind of Vuqar Farman Aliyev, country managing partner for KPMG Azerbaijan: The banking assets versus GDP ratio has increased in recent years, but still only accounts for 31 per cent of GDP. In Switzerland, this is 700 per cent – we have much to do in developing the banking sector, but we have one of the highest GDP growth rates in the region, so there is great potential.

The chairman of the Baku Stock Exchange, Fariz Azizov, noted that Azerbaijan is now entering a new stage of capital market development.

ICT is taking centre-stage in Azerbaijan’s economic diversification. The country is transforming into the regional ICT hub, having launched its first telecommunications satellite in 2013. One of the most exciting ICT projects is TASIM, the Trans-Eurasian Information Super Highway. The head of the project at Azerbaijan’s Ministry of Communications and High Technologies, Zaur Hasanov, said TASIM is creating a transnational fibre-optic link through 20 countries, including Georgia, Turkey and Turkmenistan, connecting Europe and Asia.

Farid Ismayilzade, founder and CEO of GoldenPay, Azerbaijan’s first provider of online payment services, was equally enthusiastic: The ICT sector is a very young sector in Azerbaijan, and all the panellists for this session are under 30 years of age. It is noteworthy that the Azerbaijani ICT Ministry has been renamed the Ministry of Communications and High Technologies. We want to export our technologies and also attract foreign investment. The Azerbaijan Diplomatic Academy has recently opened an ICT department to train the new generation of software engineers. 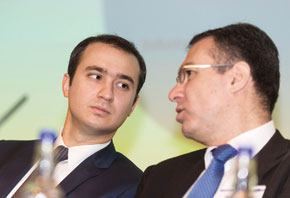 A higher international profile is an aid to the economy. As H.E. Tahir Taghirzade, Azerbaijan’s ambassador to the UK, told the forum: We are currently at a new stage of our development. We are now looking forward to hosting the European Games in 2015, and the following year Formula 1 cars will race through the streets of Baku. This will place Baku in the radar of ordinary citizens across Europe. It will also showcase the diverse opportunities in the country.

The selection of Baku to host the inaugural European Games in 2015 has prompted a wave of construction. William Louis-Marie, practice director, communications at the Baku 2015 European Games Operations Committee, said: This will be the biggest sporting event – in fact, the largest event ever – to be hosted in Azerbaijan. It will be attended by 6,000 athletes, 10,000 officials and 1,000 journalists across 17 days of competitions. Azerbaijan has taken on a great challenge – to organise the inaugural European Games in 30 months. President Aliyev has decided that sports are the ideal vehicle to promote his country. It will serve to root Azerbaijan firmly in Europe.

Though it might focus on economic diversification, no business forum on Azerbaijan can ignore the energy industry. As Tobias Ellwood MP, parliamentary under-secretary of state for foreign and commonwealth affairs, said: With significant volumes of both oil and gas, Azerbaijan is a key player in the energy world and is a strategic energy partner for the UK and the rest of the EU. The development of the Shah Deniz field and construction of the Southern Corridor to Europe is something that we all welcome and fully support. We appreciate that energy security benefits the entire EU.

The forum’s energy session focused on the implications of the Southern Corridor, which will bring gas from Azerbaijan’s giant Shah Deniz field direct to Italy and provide the EU with a major source of secure energy.

Joe Murphy, BP vice-president with responsibility for the Southern Corridor, explained that the corridor is a series of mega-projects: It represents $45bn of investment, bringing 16bcm [billion cubic metres] per annum of gas from Azerbaijan to Turkey and then into Europe. The scale and size of such a project would have been inconceivable until recently. This is being developed within five years, with first gas coming to Europe in 2020.

The section of the Southern Corridor that will pump gas through Turkey is known as TANAP, or the Trans-Anatolian Pipeline. TANAP’s external relations manager, Maqsud Mammadov, gave the latest figures: The Southern Corridor project is 3,500 km long and will initially deliver 16bcm by 2020, and be upscaled to deliver 31bcm by 2026. TANAP is capable of delivering 100bcm per annum. Construction will begin next year, and take five years to complete.

Demand for gas in Europe is growing. Christopher Pincher MP, chair of the Azerbaijan All-Party Parliamentary Group and a member of the Energy and Climate Change Select Committee, said: The world and Europe are hungry for gas. Between 1970 and today, the demand for gas in the UK has doubled. Our coal-fired power stations are being decommissioned over the next four years, despite the fact that 38 per cent of UK energy comes from coal. Energy security will become more important as we become more reliant on gas. Azerbaijan represents a secure source of this energy.

As the forum took place in London, relations between Azerbaijan and the UK were also discussed. Azerbaijani Ambassador Tahir Taghirzade again: The UK has never passed a piece of anti-Azerbaijani legislation, recognises the importance of stability in the region, and has never been confused about the balance of its own economic and political interests.

Tobias Ellwood highlighted Britain’s role as an investor: The UK is the largest FDI contributor to Azerbaijan, and there is opportunity to further demonstrate our commitment to the country with more frequent visits by ministers and even the prime minister, bringing political engagement of the highest level.

The head of the energy panel, Mehmet Ögütçü, chairman of the Global Resources Partnership, asked the minister to extend an invitation to UK Prime Minister David Cameron to visit Baku, which he promised to do.