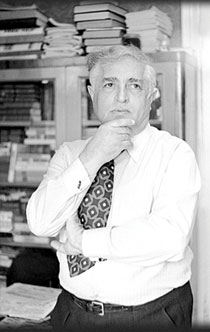 A young woman, barely out of school, is practically thrown out of her home by her bullying stepfather and falls in love with a much older man. The subject of a gritty contemporary drama? No, of a play first performed in Soviet Azerbaijan in 1964.

You’re Always with Me (Sən həmişə mənimləsən) by Ilyas Afandiyev received its west European premiere in London in September. That it was as fresh and relevant to London audiences in 2014 as it was to Baku audiences 50 years ago is testimony to the quality of the play, translation and production.

A psychological drama, You’re Always With Me tells the story of Nargile, a young woman attracted to her much older neighbour, lonely factory manager Hasanzade. Both Nargile’s mother, herself in a loveless marriage, and Nargile’s best friend oppose the relationship. 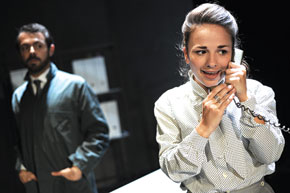 A love story and coming of age tale, the play could also be read as an allegory, in which Nargile’s stepfather represents the controlling Soviet Union, her mother suppressed Azerbaijan and Nargile a dissident looking for a relationship with the forbidden, the out of reach Hasanzade who represents the west.

You’re Always With Me was produced in London by Aloff Theatre, a UK-based theatre company dedicated to bringing Central Asian and East European texts to the British and international stage. The translation by Aloff’s Senan Aly, who was also the show’s producer, was natural and fluid, zipping along.

The set and costumes designed by Paulina Rzeszowska successfully evoked the 1960s Soviet Union, in part through the use of muted yellows and browns. The choice of closing music for the play was inspired – a recording, famous in Azerbaijan, of Rashid Behbudov singing Ayriliq (Separation). While the words were written about Azerbaijanis separated by the border between the Soviet Union and Iran, the sense of yearning and the period fitted the production perfectly. The show’s sound designer was Oliver Weeks, lighting designer Tom Boucher and assistant director Mark Modzelewski.

You’re Always With Me was performed off the West End at the Lost Theatre in Stockwell. An ideally-sized venue it was large enough for the staging and audience but small enough to be intimate. The two-week run was sponsored by Azerbaijan’s Ministry of Culture and Tourism. 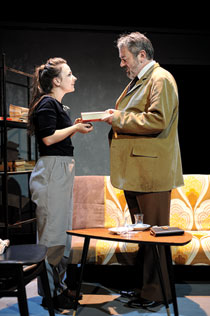 The production marked the centenary of the birth of author and playwright Ilyas Afandiyev. He was born in 1914 in the south-west Azerbaijani town of Fizuli, then called Karyagino and part of the Russian Empire. Ilyas Afandiyev’s father was a respected merchant, but he was branded a kulak by the Soviet state, too wealthy for a peasant, and his property was seized. Life was difficult for the young Ilyas and his family.

After finishing secondary school in 1930, Ilyas Afandiyev’s first job was as a school teacher of Azerbaijani language and literature and, later, of geography. His first love, however, was literature, especially Russian classics. When he finally graduated in 1938, his studies having been interrupted by the death of his father, Ilyas Afandiyev started work as a journalist in Baku. The following year, he published his first collection of short stories, Kendden Mektublar (Letters from the Village).

On writing his first collection, the author said: I remember my time working as a geography teacher in Karyagino. It was a long winter’s night, outside it was cold and snowing. As usual, I was reading, but felt strangely solitary. Suddenly, it came to me like a flash from the heavens that I should write about my life and thoughts in the village to a friend in the city. I couldn’t resist such a powerful idea and immediately started writing. I didn’t know what it was at first, but I soon realised that I was writing a story. The next day and the next it was like that as well. And so I wrote nine stories one after the other. (The quotation is taken from the author’s memoirs, published in Azerbaijan journal in 1987, and cited by researchers Qurban Bayramov and Jale Qurbanqizi Rzayeva in their book Literary Criticism of the Work of People’s Writer Ilyas Afandiyev, and by Aloff Theatre in their pre-show publicity.) 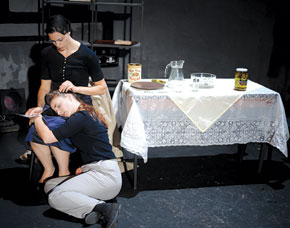 With the publication of his first collection of stories and his many newspaper articles, Ilyas Afandiyev’s career was launched. In 1940, he became a member of the Azerbaijan Writers’ Union, which allowed his work to reach a wider audience in Azerbaijan and the rest of the Soviet Union. In 1943, he co-wrote his first play Intizar (Expectation) with Mehdi Huseyn, which premiered the following year at the Azerbaijan State Drama Theatre.

Ilyas Afandiyev’s You’re Always With Me was first performed in Baku in 1964. This was an especially productive period in the writer’s career and coincided with the relative thaw in the Khrushchev-led USSR. The play is a perennial favourite with Azerbaijani audiences and remains in the theatre repertoire. It was made into a film for TV in 1987, starring popular actors Rasim Balayev as Hasanzade and Malahat Abbasova as Nargile.

The son of a family disgraced by the Soviet regime received some of its highest awards, including the Order of Lenin and the title People’s Writer of the Azerbaijan Soviet Socialist Republic. To mark his 80th birthday in 1994, Ilyas Afandiyev was awarded the Order of Glory of the independent Azerbaijan Republic, only the second person to receive the honour.

He died two years later, in 1996, leaving a legacy of over 20 plays, six novels, novellas and dozens of short stories. Ilyas Afandiyev is buried in the Avenue of Honour in Baku.