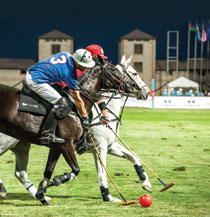 For the second year running, Azerbaijan has hosted the Arena Polo World Cup with great success. This year was even better for the home fans, as the Azerbaijani national polo team made its competitive debut. The team was formed, trained, and ready to compete at international level in a matter of months. Not only did Azerbaijan compete, they won a very respectable third place – not bad for a first attempt

The event was held in the new polo arena at the Bina Horse Centre, some 30km from Baku. The centre has 40 horseboxes, high-definition lighting systems and modern polo facilities.

The new Azerbaijani polo team is made up of chovgan players. Chovgan is an ancient form of modern polo, still played in Azerbaijan today. Players were professionally trained by polo coaches from La Alegría Polo Farm in Buenos Aires. Adrián Laplacette was the head coach, while his brother, Raul Laplacette Jr, worked with the team throughout the training period. They were complemented by polo trainer Thomas Winter. 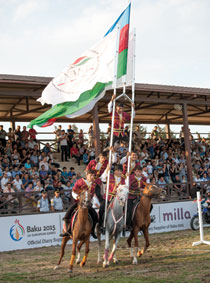 Azerbaijan became a member of the World Polo Association FIP last December. Upon opening the World Cup event, Elchin Quliyev, president of ARAF said: Our Federation has managed to create the first national polo team in the history of Azerbaijan. Unlike last year, at this tournament, visitors have the opportunity to support the national team.

He highlighted the importance of the event and the creation of the Azerbaijani National Polo Team: This will show the positive effects of the development of polo in our country. With the participation of our country‘s team in international competitions, I am sure that interest in equestrian sports will increase, and such events will grow more popular, proving that equestrian sports are indeed related to us.

His speech was followed by a spectacular opening ceremony, including horse acrobatics that left the audience stunned. The vibrant show is already set to become a tradition at this polo event.

From the start, Team Chopard from Argentina played a very strong game and were consistent right up to the end of the tournament. They beat Baltika-7 from Europe in their first match, and again on the final day.

When Team Embawood from Azerbaijan battled Team Maserati from the USA in the third place playoff, no one could have imagined the result. Team Maserati got off to the best start, scoring a great goal, but all of a sudden, Embawood scored two. This was followed by a third from Vugar Seyidov, and then the young Elchin Jamalli scored twice. The crowd went crazy, everyone was on their feet cheering for Azerbaijan. They absolutely made the game theirs, and even though Pablo Miguens scored twice for Maserati, Raul Laplacette scored once again for Embawood. The match ended 8-4, meaning a creditable third place for Azerbaijan in their first ever tournament.

In the culmination of three days of intense competition, Chopard of Argentina faced Europe’s Baltika 7 in the final. Chopard ran out comfortable winners 9-4. 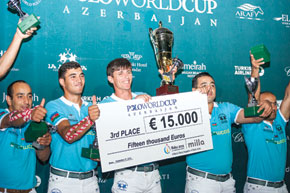 Adrian Laplacette, head coach of the Embawood team, recognised Azerbaijan’s hard work: It was a very good game, they showed that they can really play. They proved that they had the passion and the will to play polo. One year ago, I would have never expected such an outcome. They are very good riders and with Raul Laplacette as leader, the team gave great results.

The prizes followed: Embawood player Raul Laplacette was named Most Valuable Player of the tournament; Vugar Seyidov was awarded for his sporting behaviour and fair play. Elchin Jamalli was proclaimed the Best Newcomer of the Polo Cup, and finally, the Argentinean pony Torreja received the prize for Best Playing Pony. Chopard took home 100,000 euros, Baltika-7 received 50,000 euros, Embawood, 15,000, and Maserati 5,000.

The tournament was sold out on all three days with total crowds of over 12,000. Due to the success of the event, Reto Gaudenzi, president of World Polo GmbH, has already confirmed that the tournament will run again next year. So, the 2nd Grass Arena Polo World Cup was a resounding success. Not only has it opened opportunities for careers in polo, but it has proved, once again, that polo has come home.