Eagles over Aberdeen Young Dancers Take the City by Storm 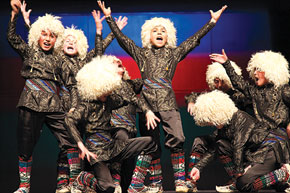 Geographically, European cities don’t get much further apart than Aberdeen and Baku, but this summer they had more than the oil industry in common. Every year Aberdeen hosts an International Youth Festival (AIYF) that celebrates the talent, variety and diversity of young people in the arts by bringing together outstanding music, drama and dance acts from around the world. In July and August this year the festival, in its 40th year, presented the good citizens of the Granite City with a treat from the Land of Fire. The dance group Eagles of Azerbaijan (Azərbaycan Qartalları) flew in and gave five performances in five days that drew the loudest cheers from enthusiastic audiences. But how the Eagles came to land in Aberdeen is a story in itself.

On a dark cold night in 2012 a group of TEAS friends took my late wife and former Visions writer Fiona Maclachlan to watch this aspiring dance troupe in Mardakan – they knew that, as someone who loved Azerbaijan and its culture, she would be enthralled. The youngsters were in the old Culture Centre rehearsing their exciting traditional Azerbaijani dances under the watchful eye of the group’s founder and teacher Khanlar Bashirov.

Khanlar muellim, a former dance master with the State Dance Ensemble, had left the capital for the village on the Absheron Peninsula to ‘go back to the roots’ and instil a love of the nation’s dance tradition in a group of ‘ordinary’ boys.

Fiona was indeed excited by what she saw and determined that this was something so special that she would help however she could to promote the young dancers.

Late on another wintry afternoon at our home in Perth, Scotland, we received a surprise visitor. Dr Ruth Payne, Fiona’s tutor and friend from Aberdeen University, passed by our apartment and stopped to say hello, on the off-chance we would be in. In typical fashion the conversation veered enthusiastically towards Azerbaijan, and Fiona shared her dream about the dancers... a pause... Ruth revealed her latest project as an organiser of the Aberdeen International Youth Festival 2014. And so the die was cast.

TEAS’s Ian Peart recalls: Having seen the boys in action, there was no question, we simply had to take Fiona to see them on her next visit and of course once she put her mind to getting them to Aberdeen, it had to be done. Even more so after we lost her so sadly last November. The embassy’s material and administrative support for these talented Azerbaijani youths was a real bonus and, like the Eagles – not to mention the Aberdonian audiences – we are very grateful to the ambassador and his staff. 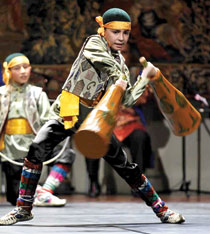 There was support, too, at the other end of their flight north. Ruth Payne was determined to follow through on her protégée’s project and was on the spot to ensure that the Eagles had every condition to perform at their best – including dealing with the late arrival of costumes and instruments! She felt well rewarded for her efforts from the very first of their five performances: It was a very real privilege to help facilitate the presentation of Azerbaijani talents at AIYF.

I took a friend from Ukraine with me and it was astounding to see the energy and diversity of the dances, with their traditional instruments. My friend was so impressed that she got tickets for both their shows at His Majesty’s Theatre. The first was a Dance Gala and there was no question the Eagles earned the loudest roar of approval I’ve ever heard. On the final Gala Night they were given the honour of closing the show.

You can get a glimpse of the Eagles’ Gala performance on Youtube.

The results of the hard work and support were evident from audiences’ reactions. They were mesmerised by the boys’ energy and discipline and were fascinated by the rhythms and sounds of the traditional musicians that play with them (Khanlar muellim insists on live accompaniment).

In keeping with the performances, the costumes evoke both tradition and humour, in sheep’s wool waistcoats and hats and knee high boots, while the boys display tremendous skill, harmony and co-ordination. Their enjoyment was infectious and the Scottish audiences responded with cheers, clapping and laughter at the jokes that punctuated the routines.

Stewart Aitken, artistic director/CEO of the festival, was equally delighted with the Eagles’ contribution:

They were a huge hit with audiences and fellow participants alike. I hope that they will consider returning to AIYF in the future.

As the boys, who are already experienced on European tours, become more widely known, other international doors will surely open. Each door will present its own opportunities for the rich and colourful culture of Azerbaijan to shine – a dream shared by increasing numbers of admiring audiences.

Now we leave the last words to Dr Ruth Payne, mentor of Fiona Maclachlan, whose legacy of commitment to Azerbaijani culture was reflected in the onstage energy of the Eagles of Azerbaijan.

I strongly believe that young people sharing culture (and affection – there were lots of hugs!) is the best way to make our world a better place in terms of understanding, and I felt we achieved that. So finally, thank you very much, Fiona, for all you did and to the Eagles – ‘Haste ye back!’

We thought the Azeri Eagles were amazing, fabulous, so full of energy, just brilliant. Julie Vickers

I am an Indian working in Aberdeen, UK. I saw your group's performance at the AIYF 2014. I just wanted to congratulate you on an excellent performance and thank you for showing myself this new art form of Azerbaijani dance. Amol Deshmukh