Uncle Ali – Shoemaker to the Stars 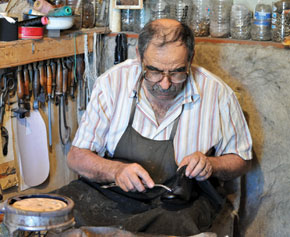 Shoemaking is one of the oldest crafts in Azerbaijan. For centuries, shoemakers, or cordwainers to give them their old English name, were highly respected in society. They made shoes for ordinary people and nobles, for workers and artistes. Their craft was popular and well paid, but today it is dying out. We live in the era of plastics and cheap fabrics. People prefer to buy ready-made shoes. They think, why wait for days for a pair of shoes? It is better to go and buy them straightaway. It is easier and cheaper too. Though patent leather shoes do not last as long and are not as strong as leather, there is hardly any demand today for shoemakers. Besides, many people don’t want to be shoemakers, as it’s hard work and not lucrative.

When I was told that shoemaker Ali Ahmadov is also an Honoured Artist of the Azerbaijan Republic, I was amazed. He was awarded the title as he had been making shoes for dancers of the Azerbaijan Philharmonic for about 50 years. Before going to interview him, I did some research; I found out that he is much loved in the city of Baku. On 2 June he won the Humay prize for his art of shoemaking. This is just one of the dozens of awards he has received for his work.

I was sure that I was about to meet one of the most fascinating men in Azerbaijan. People told me that Ali Ahmadov is so interesting that they like to sit and talk with him, even if they don’t need their shoes repairing. If you are looking for his place, you will find it near Azerbaijan State University of Languages. You will spot the location, I am sure. On the door of the shoemaker’s little workshop is a big poster of Nizami Ganjavi – for centuries, Azerbaijan’s favourite poet.

Ali Ahmadov met me himself. When I saw him, such a big, tall man, I could hardly believe that he is 80 years old. He has such energy, the energy of old Baku. To me he looks more like a blacksmith than a cobbler. Hard work and long years of sitting have not bent his back. His small place seems to be from another age – full of books, posters, old photos, newspapers…. A real workshop of an Honoured Artist. 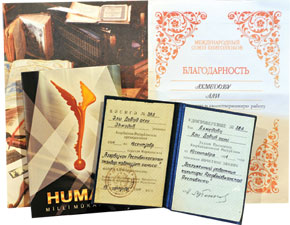 Uncle Ali’s awards. In the foreground is his certifi cate as an Honoured Cultural Worker, 1991

Ali Ahmadov, or as most people call him Uncle Ali (Ali dayi) was born in the old Azerbaijani city of Sheki in 1934. His father, Davud, was a teacher, but he fell victim to Stalin’s repressions and died in Siberia in 1938. Uncle Ali says he does not remember his father, as he was so young when his parent was taken away. Uncle Ali was brought up by his mother. When he was about 12 years old, she took him to the workshop of master shoemaker Aydin. Uncle Ali began to learn shoemaking. As he talked about his childhood, Uncle Ali became sad.

I have made only one big mistake in my life. I did not get an education. I could have done after I moved to Baku, but I didn’t. I’m so sorry about this.

You never went to school?

I did, until the sixth class [the age of 12 – Ed.]. Then the situation made me leave school.

Uncle Ali, when did you come to Baku? How did you become so well-known?

I served in the army in Kazakhstan. I was in the army for three years. When my service finished, I did not want to go back to Sheki. I was young, I wanted to work and earn money. First I did any job in order to make a living. But then people found out about my talent. It is my art that made me so well known. In 1959, famous dancer and Honoured Artiste Alibaba Abdullayev gave me a job at the Philharmonic. I began to sew shoes for the dancers. For 25 years I made shoes for many famous people. The wonderful painter Tahir Salahov and singer Rashid Behbudov came to me.

Is it different to make shoes for dancers than for ordinary people?

Of course it is. You have to choose hard leather for shoes. As dancers always move their feet, their shoes need to be flexible and hard-wearing. The sewing has to be good too. I have many lasts for dancing shoes. 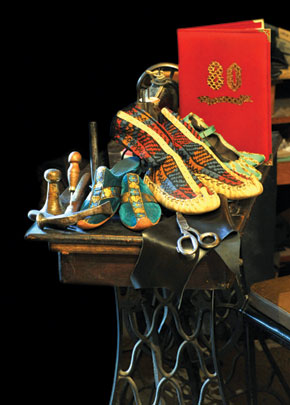 You said that the legendary singer Rashid Behbudov also came to you. How do you remember him?

He never gave autographs to anyone, but for me he wrote “to my dear Ali Ahmadov”. He loved me. It was a great honour for me.

How did you become an Honoured Artist?

I was awarded the title on 19 September 1991. Over 50 newspapers wrote about me. Bakhtiyar Vahabzade, a great Azerbaijani poet, liked me so much that he even wrote a poem about me. Then this poem was translated into Russian and Turkish. Turkish and Russian poets also wrote poems about me.

I can see many shoes here…

There are 11 types of shoes in my workshop – six are for women and five for men. Do you see the boot lasts? My workshop is the only place to have some of them. In Azerbaijan the only size 50 boot last is in my place. I cannot use all of them, but I keep them.

I have many problems. Now many shoes come from abroad. Mostly they come from China. People don’t want to bother with good shoes and buy cheap ones instead. Very few people want to sew shoes. This profession is going to die out. There is actually no leather here. People don’t make leather. I don’t know where to buy it. We have to make shoes from real leather. It should stand upright. Do you see these shoes?

They are not made with glue. I sewed them with my own fingers. Look at these golden lines. It means this shoe is for an engaged girl. Look, the left golden line is the girl, the right one is the boy. It is the mediator between them. There is a meaning in every line in my shoes. When making them, I try to know the person for whom I am sewing the shoes. I want the shoes to belong not only to their feet, but to their heart and character too. 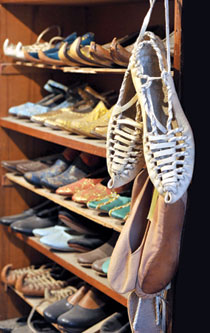 Do your children want to continue your job?

No. I have two sons. The elder is very talented, but he doesn’t want to work. He says it is very hard and his fingers hurt. Of course, they hurt. There is no art or work that is easy. I sacrificed 58 years of my life to this job. But now there are lots of shoes everywhere. They are neither good nor made by qualified shoemakers. I and people my age always prefer to have two pairs of shoes but very good ones. People have hundreds of pairs of shoes. They wear them two or three times, then puff … they are not shoes any more. When I look at a shoe I know where to wear it and how it was made. Now people do not pay attention to such things.

I have 4,000 books. I haven’t only collected them, I’ve read them and know them by heart. I have this talent too. Ask me anything by Nizami, and I can recite it for you. You can choose any book here, I will tell you sentence by sentence what is written there. For me, the great poet was Nizami Ganjavi. My friends liked poems when I was young. I always read poems when I’m working. Look at these portraits… these newspapers… I’ve been collecting them for years. Do you know the newspaper Literary Azerbaijan?

Yes, I came across it doing research in the Akhundov Library.

Look over there. I have all the issues from 1953 to 1991. I collected them all. It was published twice a month. And I didn’t only collect them, I read them all too. Tell anyone who needs these newspapers that they can come and look through them. There are lots of interesting things there.

Are you satisfied with your work today?

I feel sorry for my craft. It is going to die out one day, but it was the best art-handicraft job in Azerbaijan. I love my job but there is no one to continue it. I would like the Iceri Sheher (old walled city) to be the place for old works of art. I could sit there and work for years again. It has the soul of old crafts.

Thank you very much.

Uncle Ali thanked me, thought a little, then returned to his world of shoes. When an 80-year-old shoemaker is at work, you can hardly see his hands. As I watched him, his workshop felt like a time machine. When I left, I returned to the modern world, the world of noise, cars, tall buildings… I was now a long way from Old Baku, the Baku where the shoemakers, stonemasons and potters lived and worked. I felt a deep sadness that such art is going to disappear.

About the author: Guler Kasimova is a researcher and author of the documentary novel Open Literature.

From Shoemaker Ali by Bakhtiyar Vahabzade

Respectful charity,
Benevolent love.
Shoemaker Ali’s god is his Homeland,
His friends are craftsmen, his altar his craft.
A torrent of zeal streams through his veins,
To him the cold-blooded are enemies.
From the walls of his shoemaker’s booth
Nizami looks out, Sabir looks out.