Rising Tides on the Caspian Shores 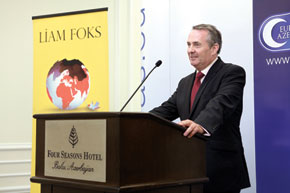 Dr Liam Fox, MP, addresses the launch of the Azerbaijani translation of his book

TEAS Press launched its first book on 15 September. It was perhaps appropriate that a book by a British politician about the challenges of an increasingly globalised world was the first to be translated into Azerbaijani and published by the new company.

Dr Liam Fox MP, former UK secretary of state for defence, was in Baku to present Rising Tides: Facing the Challenges of a New Era (Şahə qalxan dalğalar. Yeni eranın çağırışları ilə üz-üzə) to a distinguished audience at the capital’s Four Seasons Hotel. He was introduced by TEAS Chairman Tale Heydarov who welcomed the book for its … deep political analysis and contribution to the further strengthening of relations between Azerbaijan and European countries… However…if local and regional challenges are problematic to a group of countries, then they are actually a problem throughout the world and for all humanity. The world must come together, he said, to develop solutions.

Dr Fox himself acknowledged his setting as he illustrated the speed of recent change: We never imagined that the changes in the world would be so rapid. While in ancient times, it took three decades to travel the Silk Road to Europe, now the skies have up to half a million passengers flying at the same time. 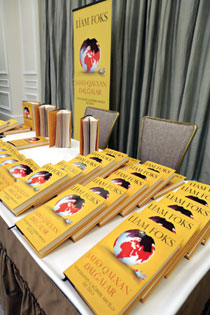 Reflecting later on the publication, he added: Having the book translated into the Azerbaijani language was a very great honour but, more importantly, I hope it is the beginning of a trend where more Western political books can find a new audience. Being able to read a book in your own language is always much easier and I’m extremely grateful to all those who were involved, both in the translation of the book itself and in organising such a splendid launch party.

Ever eager to engage in direct debate on the important issues he raises in the book, Dr Fox next day accepted an invitation from Khazar University to test his ideas with an energetic group of lecturers and students. Remarking on Azerbaijan’s significance to the West he recognised as a priority that the Nagorno-Karabakh conflict should be resolved….because when there are….difficulties over supply, for instance, Europe starts thinking about energy diversification and refers to Azerbaijan, or NATO cooperates with Azerbaijan in the Middle East, particularly over Afghanistan and Iraq. Azerbaijan is an important partner for the West.

He reflected on the lively exchanges that followed his introductory remarks: My lecture at Khazar University resulted in a very robust conversation, which I found extremely impressive. I had wondered whether those present would be willing to openly challenge some of the ideas I had set out and I think it is very reassuring that this level of political debate, and its frank nature, are present at the university. As Azerbaijan matures politically, the sort of critical analysis displayed by those who attended the lecture will be an extremely important building block. 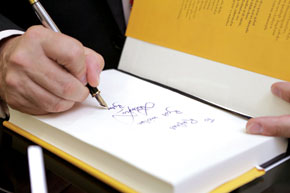 This was not Dr Fox’s first visit to Azerbaijan, but he was very happy to return to a country that continues to surprise visitors: Baku is a vibrant and increasingly international city, yet it retains a real sense of its own history. Among the blossoming number of top hotels and office buildings, the charm of the old town has an appeal all of its own. Perhaps one of the most underrated aspects of the city is the range and quality of the food that is available, catering to all tastes. For many who visit Baku for the first time, they are taken by surprise by how westernised it feels. The tree-lined boulevards by the sea give it an almost European Riviera feel. Of course, it is the warmth and friendliness of the people that most visitors will remember best.

The main purpose this time was to launch a version of Rising Tides immediately accessible to a nation that is rapidly expanding its presence within the global community: I hope that many aspects of the book will be important to the readers in Azerbaijan as the book focuses on the whole concept of globalisation and how we are now more interdependent than ever before. It doesn’t matter where in the world we live, we will be influenced by decisions taken in many other different parts of the globe. The book looks at a number of the challenges that we face in this new globalised era – the risks posed by failing states, the rise of transnational terrorism, the emergence of Islamic fundamentalism, the challenges of global financial imbalances and the competition for global commodities in a world where the population is still rapidly increasing. None of these challenges are unique to any one country and the geographical position of Azerbaijan means that, sitting at an important global crossroads, many of these challenges may be faced simultaneously. Our task is to turn these challenges into opportunities.

537870
SocietySummer 2018
Shamkir Shows its Potential Through EU Project
by Yelena Ostapenko
more
SURVEY
Which subjects are you looking for on this website?
24%Arts & Culture
12%Food
35%History
6%Sport
24%Travel & Tourism
Number of votes: 752
VIDEOS