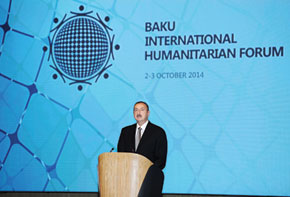 Azerbaijani President Ilham Aliyev addresses the opening of the forum

From New Zealand and Brazil, Sudan, South Korea and points in between, they converged on Baku for the fourth International Humanitarian Forum. Two days of topical discussions in the Azerbaijani capital on 2 and 3 October attracted four former presidents, 14 Nobel Prize laureates and some 500 participants from 63 countries.

So what did they talk about? Round tables focused on multiculturalism, media in the digital age, sustainable development and ecological civilisation, converging technology, molecular biology and humanitarianism in the post-modern era.

Opening the forum, Azerbaijani President Ilham Aliyev set the discussions into their urgent context: What is happening today is very alarming. Both in the Muslim world and in Europe there is a growing trend of radicalism, discrimination and racism. We see these trends and anxiously follow them. During these days in Baku, we will try to find out what needs to be done to eliminate these trends. This is the main question because we are talking about a dialogue of civilisations.

Mr Aliyev’s concern was shared by Abdulaziz Altwaijri, director-general of the Islamic cultural organisation, ISESCO, who told the forum: Never was the world so in need of building harmonious relations and combined action on firm grounds for world peace and security than it is today.

By bringing together people from around the world, the forum provided an ideal occasion for discussions on multiculturalism.

In his speech, President Aliyev expressed disappointment at the view that multiculturalism has failed. I should note that there is no alternative to multiculturalism in the modern world. The vast majority of countries in the world are multi-ethnic. If multiculturalism has crashed, then what is the alternative? And the answer is also very clear. It is discrimination, racism, xenophobia, Islamophobia and anti-Semitism. We must speak out against these perilous trends.

Irina Bokova, director-general of the United Nation’s cultural organisation, UNESCO, commended President Aliyev for the timely initiative. In a video address, she said: The themes of this forum – multiculturalism, media changes, science and technology, innovative and sustainable development resonate with the urgent needs of societies across the world. 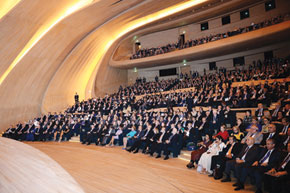 Discussions on multiculturalism and sustainable development lead naturally to talk of co-operation. Co-operation was a theme of the address to the forum by Helen Clark, administrator of the United Nations Development Programme and former prime minister of New Zealand: Azerbaijan is well placed to share its development experiences with other countries through South-South and Triangular Co-operation. Indeed, UNDP and Azerbaijan have already partnered on support provided by the Ministry of Communications and High Technologies here to its Afghanistan counterpart through the UNDP offices in Baku and Kabul.

Mrs Clark listed other innovations that Azerbaijan could share, such as the ASAN Service centres, which provide government services to the public, or the country’s new pension administration system.

Azerbaijan lies at a junction of east and west, so it is hardly surprising that it should host such an inclusive forum. As President Aliyev said: I believe that in the modern world Azerbaijan has a unique role from the geographical and humanitarian perspectives. We are a country located between Europe and Asia, on the ancient Silk Road. We understand Europe very well and are also part of the Muslim world. We strive to ensure that the dialogue among civilisations, the humanitarian dialogue becomes even stronger and intensifies.

The Baku International Humanitarian Forum is – in its objectives and mechanisms – a form of world intellectual alliance for peace. ISESCO Director-General Abdulaziz Altwaijri

It is already dubbed the intellectual Davos. Valentina Matviyenko, chairwoman of the Federation Council, the Russian parliament’s upper chamber