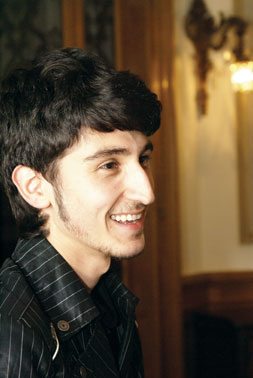 The smile of victory, photo by Kerrial Newham
Pages 82-87

On 18 July, on the beautiful shores of Lake Geneva, 19-year-old Isfar Sarabski achieved a remarkable first for Azerbaijani jazz - he was a joint winner of the Bosendorfer solo piano competition at the Montreux Jazz Festival.

In the world of jazz, festivals do not come much more prestigious than this one in Switzerland, now in its 43rd year, and Azerbaijan has certainly punched above its weight there in recent years. Two years ago, Shahin Novrasli pioneered the assault on the piano competition, coming a very creditable second; Salman Gambarov also made an appearance at the festival that year with his Bakustik group. The effect was felt in this year´s programme too, as Montreux explained that its Eastern Delights project was “dedicated to the music and aromas of the fascinating countries between the Adriatic Sea and the Ural Mountains. This year, Azerbaijan.”

Thus stalwart pianists Emil Ibrahim and Salman Gambarov, along with saxophonist Zulfugar Bagirov, were in Montreux to play and help encourage their young compatriot. And, as if to celebrate Isfar´s triumph, Aziza Mustafazadeh´s concert, in the fairy tale setting of the Chateau de Chillon, followed the competition final.

Thus Azerbaijan certainly made itself heard at Montreux 2009, and Isfar Sarabski is the name etched into the records.

Despite his youth (he was born in Baku in November 1989), Sarabski is no stranger to the jazz stage. Bakubased businessman Martin Newham recalls the then 15 year old playing what was possibly his first professional engagement at the Venue restaurant in the summer of 2005, “After that, Isfar´s progress has been no surprise.” 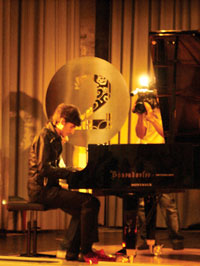 Going for gold, photo by Kerrial Newham
Performances at Baku jazz festivals gave further evidence of a rapidly developing confidence and maturity, and it was not long before he was resident at the Baku Jazz Centre. International experience followed with performances at the Stars of Issyk-Kul festival in Kyrgyzstan, Norway´s Silda Jazz festival and, last year, at Musenergo in Dubna, Russia.

Jazz, of course, is one of the most exacting forms of music and Sarabski has sweated long and hard to reach his current peak - a dedication illustrated by the fact that the day after returning from Switzerland he was back at the keyboard. Not many people realise that it is practice for five or six hours every day that produces those apparently seamless performances on stage. And practice for 13 years? - so far for Isfar.

He says he did not have to be cajoled into going to music classes (the Bulbul Music School from the age of six): “I wanted to listen to records more than other children did. I got a lot of pleasure from listening to the jazz of [Dizzy] Gillespie and [Louis] Armstrong.” And he is first to thank his parents for the opportunities they gave him to listen and play. His education continues at the Baku Music Academy, whose rector, Farhad Badalbeyli, was among the strong Azerbaijani contingent at Montreux.

Jazz has always had something of a bohemian reputation and this has not helped people appreciate the depth of knowledge required of a good musician. It is no coincidence that Isfar Sarabski, like Shahin Novrasli, divides his time between classical music and jazz - both list Bach among their favourites, as well as the more expected names; in Isfar´s case: Keith Jarrett, Brad Mehldau, Bill Evans, Oscar Peterson 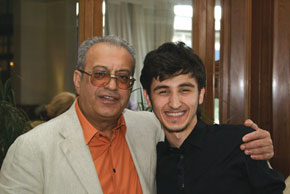 Encouraged by Nuri Akhmedov, photo by Kerrial Newham
and Vagif Mustafazadeh. As well as dealing with the invitations which have inevitably arrived since Montreux - and his “duties” as “Absolute World Champion” (©Emil Ibrahim) - this gifted young pianist also has in mind a solo concert of classical music for a Baku audience. “I love both. In jazz I can improvise and express myself. Classical music is more fixed, but this is not a minus, it is great music and it can be played in your own way.”

The last named of Sarabski´s favourites may provide the clue to Azerbaijani success in the jazz world. The genre emerged from the particular circumstances of black Americans in the late 19th century but, as it has spread throughout the world, each culture has added its own flavour - and some have more flavour than others. Vagif Mustafazadeh is widely regarded as adding what Farhad Badalbeyli refers to as the “spice” of mugham to the American form, and Isfar acknowledges that he lives within this tradition: “I play different forms of jazz with other musicians, but I introduce them to Azerbaijani music...”

When asked to comment on the general standard of playing in the competition, Isfar was generous in assessing the skills of his fellow pianists, but, “perhaps they could have made a better 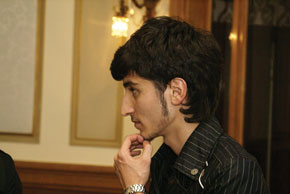 It gradually sinks in, photo by Kerrial Newham
choice of music. Perhaps the judges were happy to hear something a little different from the mainstream.”

The audition disc sent to Montreux contained his own distinctively Azerbaijani composition Novruz, as well as the compulsory blues number. Novruz also featured in the competition, along with pieces by Enrico Pieranunzi and Bill Evans.

The fact that two young pianists were declared winners of the competition - 13-year-old Georgian prodigy Beka Gochiashvili joined Isfar on the winner´s podium - and both were from the Caucasus, supports the theory that a little Eastern “spice” enlivened the jury´s taste buds.

Although he is quietly spoken and restrained, in formal company at least, Sarabski´s “hidden depths” emerge as soon as his fingers touch the keyboard. We have already referred to jazz, classical and mugham, but he is capable, too, of the whimsy and exuberance exhibited in his adaptation of the runaway theme tune to Nu pogodi! (Just You Wait!) - a favourite cartoon, a Russian Tom & Jerry. It may be that growing up in a localised culture, still very conscious of its roots and origins, gives one a firmer base and, certainly, an angle refreshingly different from that of globalised generalities.

In speaking of the competition, Isfar is quite frank about the tension he felt: “I didn´t think about winning first prize, I just worked hard and kept steady.... Practising was difficult, as I could hear the other competitors, sometimes playing the same piece, and of course I wondered whose version was best.” 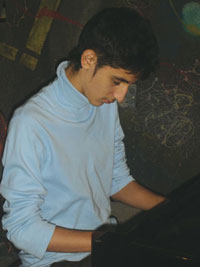 The competition finalists had to walk through the audience to reach the stage - this meant going through the sizeable Azerbaijani contingent: “I felt the audience and was grateful for their great support, but it was a big responsibility playing for Azerbaijan, the only Muslim country in the competition... I can´t say if I deserved to win, I did my best.”

At this point we should note that Isfar also received the Public´s Choice award, voted for by the audience. Despite this confirmation of his achievement, however, he is well aware that he still has some way to go: “Winning the competition was a very big step forward, but I´m not going to stop and think that now I´m a champion. I want to compose, develop new projects and move on.”

First, he is taking a well-earned rest, heading for Europe to see some of the sights he has missed on singleminded missions to play in festivals. Before he goes he is keen to express his gratitude to those who have helped him get this far: to the president of Azerbaijan, for stipendiary support; to the Ministry of Culture and Tourism, for supporting his dream to go to Montreux; to the Bulbul School and the Music Academy for their tuition; and to businessmen Nuri Akhmedov of Azeurotel, Rauf Aliyev of A&A and Martin Newham, for their sponsorship and support - and to God, for the gift.

The Montreux Festival is over, but Switzerland has not seen the last of Azerbaijan. From October to December there will be a series of events in its Culturescapes project to represent the best of Azerbaijani culture - just one of the opportunities opening up for the superb piano playing of Isfar Sarabski.