Contract of the Century What has it Done for Azerbaijan? 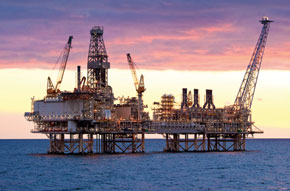 On 20 September, Azerbaijan celebrated the 20th anniversary of the signing of the ‘Contract of the Century’ – the first Production Sharing Agreement (PSA) between Azerbaijan and foreign oil companies. The deal covered three major oil fields in the Azerbaijani sector of the Caspian Sea – Azeri, Chiraq and the deepwater section of the Guneshli field (ACG).

When the contract was signed on 20 September 1994, Azerbaijan was practically in a political, economic and information blockade. The world either knew nothing of Azerbaijan or had a negative opinion about our republic. In this difficult situation President Heydar Aliyev managed to convince 11 foreign oil companies from seven countries of the importance and necessity of signing the contract, which was to open a new era in the development of the resources of the Caspian Sea.

From the early days, the then first vice-president of the State Oil Company of Azerbaijan (SOCAR), Ilham Aliyev, was involved in the negotiations with the foreign companies. He has always had a clear vision of the importance of oil, which he sums up in this way: Our purpose is not only to extract oil, to transport it and get the profit. Our purpose is to direct the benefits, either political, economic or others, received from oil, to the future of the Azerbaijani people, to its wellbeing.

Certainly, there were difficulties and obstacles along the way. The final stages of the negotiations on the Contract of the Century were conducted in the spring and summer of 1994 in Istanbul and Houston in especially tough conditions.

One tricky moment arose when suddenly the foreign companies expressed concerns about possible risks from Russia. After the collapse of the Soviet Union, the division of the Caspian Sea bed among the coastal countries had not been resolved legally. President Heydar Aliyev acted swiftly to calm the fears. He involved a Russian company in the project – LUKoil, the first private company to begin work beyond the borders of the Russian Federation. In addition, the Azerbaijani parliament adopted a document, which specified that the shelf zone is the territory of the Azerbaijan Republic.

Four months before the signing of the contract, in May 1994, a ceasefire put an end to the military phase of the Armenian-Azerbaijani conflict over Nagorno-Karabakh. A swathe of Azerbaijani territory remained under occupation by armed groups controlled by Armenia and up to a million refugees and displaced persons had flooded into Baku and the east of the country.

These various steps served to stabilise the situation in the country and the region. As a result, in September 1994, the oil companies were ready to sign the multi-billion contract with Azerbaijan. The deal was vital for the country, as it helped to establish domestic stability and bring foreign policy success.

The international companies, led by operator BP, lost no time in developing the deposit. Once the PSA had been ratified by the Azerbaijani parliament in February 1995, the 11 foreign companies formed a consortium, the Azerbaijan International Operating Company (AIOC).

As part of the first phase of the ACG project, one offshore platform, Chiraq 1, was renovated. On 7 November 1997, a little more than three years after signing the Contract of the Century, the AIOC managed to tap into an oil fountain at the first oil well in the Chiraq field. Known as the ‘early oil’, the first oil produced via Chiraq 1 was exported to world markets via the existing pipeline from Baku across the Caucasus to Novorossiysk on Russia’s Black Sea coast.

Azerbaijan received its first profit oil from the Contract of the Century later, more than two years after the beginning of production of the early oil. In December 1999, the first two tankers filled with Azerbaijani profit oil left the port of Novorossiysk. As the name implies, income from the sale of the profit oil went to Azerbaijan.

The early oil project also included construction between 1997 and 1999 of a new 830-km export pipeline from Baku to Supsa on Georgia’s Black Sea coast, at a cost of $560 million.

With oil money now flowing into the state coffers, President Heydar Aliyev issued a decree "On establishment of the State Oil Fund of the Azerbaijan Republic" (SOFAZ). It took some 18 months to establish the legal and regulatory base for SOFAZ, and the fund began to operate fully in June 2001. Until that time, the income from the sale of the profit oil had accumulated in a special account of the National Bank. SOFAZ began its work with $271 million, transferred from the National Bank account. Thirteen years later, as of 1 July 2014, the assets of SOFAZ had already reached $37.6 billion.

The main goal of the State Oil Fund is to accumulate and efficiently manage oil revenues for future generations. Its objectives include maintaining macroeconomic stability, decreasing dependence on oil and gas revenues and developing the non-oil sector. The Fund places assets abroad in order to minimise any negative influence on the economy and to help prevent ‘Dutch disease’.

According to SOFAZ’s regulations, its funds can be used for construction and reconstruction of strategically important infrastructure and social projects of a national scale.

In the first decade of its independence Azerbaijan did not really feel the benefit of the additional oil income. The country was living on petrodollars, though, but they came into the budget from output by the State Oil Company of Azerbaijan (SOCAR). Oil always was the foundation of our economy, not only since the Soviet period, but since the times of Tsar Nicholas II. SOCAR was and is the engine of this sphere.

SOCAR and its ACG partners were very unlucky in the first years of development of the Chiraq field: the first barrels of oil from the field were sent to world markets in March 1998 from the port of Novorossiysk. The high-quality Azerbaijani oil was mixed in Tikhoretsk with Russian and Kazakhstani oil and was sold as Urals oil, which is a few points cheaper than Brent crude. It wasn’t until the consortium was able to export its oil through the Georgian port of Supsa in April 1999 that it could be sold as Azeri Light, which is more expensive than Brent. However, at this time, the world oil price started to plummet. All year the average price of Urals oil was about $10 per barrel. 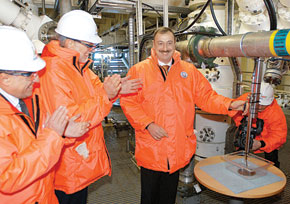 The following year the oil price crept upwards and revived fully after 2000. This was when the consortium began to think seriously of full-field development of Azeri-Chiraq-Guneshli. The Azeri and Guneshli fields are deeper than Chiraq so required more investment and advanced technology.

At the ceremony to mark the 10th anniversary of the Contract of the Century, it was announced that in fewer than seven years (from November 1997 to 1 September 2004) over 35 million tonnes of oil and 6 billion cubic metres of associated gas had been produced from Chiraq.

ACG has been developed in phases. First came the early oil from the Chiraq 1 platform. Next came development of the Azeri field with the installation of three new platforms – Central Azeri, West Azeri and East Azeri – in 2005 and 2006. The third phase of development saw another new platform, Deepwater Guneshli, come on stream in 2008. The most recent phase of ACG was the Chiraq oil project; the West Chiraq platform, the largest in the Caspian, was installed between the existing Chiraq 1 and Deepwater Guneshli platforms and produced its first oil in January 2014.

In all, as part of the Contract of the Century one platform has been renovated and seven new platforms built. Of these, six are production platforms and two processing platforms. A complex web of subsea pipelines pumps production from the eight platforms to the Sangachal terminal, one of the largest oil and gas processing terminals in the world.

A separate project, construction of a giant oil pipeline from the Sangachal terminal near Baku to the Turkish Mediterranean port of Ceyhan, has been essential to the success of ACG. The Baku-Tbilisi-Ceyhan pipeline became operational in June 2006 and has exported more than 255 million tonnes of oil, most of which came from ACG.

According to SOCAR’s data, as of 1 September 2014, 185 million tonnes of profit oil had been transferred to the Azerbaijani side within ACG.

Since the start of production on the ACG contract area, the average daily volume of extraction of hydrocarbons has been 90,000 tonnes of oil and 35 million cubic metres of gas.

According to figures for the year 2013, 32.7 million tonnes of oil were produced from ACG, of which 22.3 million tonnes were profit oil for Azerbaijan. That is, in the last year Azerbaijan received more than 68.8% of the produced oil as profit. Taking expenses and company shares into consideration, Azerbaijan can be said to have received about 80% in profit.

About the author: Ilham Shaban is head of the Caspian Barrel Oil Research Centre