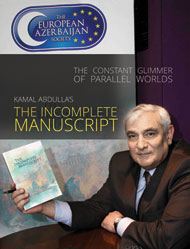 Kamal Abdulla at the launch of the English translation of his novel, London, 2013
Poet ruler Shah Ismail Khatai, Bard Dada Gorgud, a shape-shifting ogre and Fatima of the Forty Lovers – just some of the characters in The Incomplete Manuscript, a novel by Azerbaijani author Kamal Abdulla which is now available in English.

The eagle-eyed may have spotted that one of these characters – Shah Ismail – was in fact a historical person, founder of the Safavid state in Iran and Azerbaijan in 1501. And enthusiasts of the epic will recognise the name Dada Gorgud (also written Dede Korkut or Qorqud) and possibly Fatima of the Forty Lovers. Dada, or Father, Gorgud is the narrator of The Book of Dada Gorgud, 12 stories about the heroes of the Oghuz Turks. He is bard, soothsayer and holy man and, like the heroes of his tales, may or may not have existed. His book certainly does exist and is revered as one of the oldest epics of the Turkic-speaking peoples and the foundation of Azerbaijani literature.

The Incomplete Manuscript follows a fascinatingly modern, even post-modern, path into Turkic legend and history. While the author enjoys tantalising his readers and challenging their assumptions, he has created a book that can be appreciated on many levels, not only the literary. It is detective story, historical fiction, fantasy, psychological thriller and more.

But first a fuller introduction to The Incomplete Manuscript itself. A modern-day narrator tells us how he found an old document in the Institute of Manuscripts in Baku, which turns out to contain fragments from two interwoven, seemingly disparate tales. The first tale is an account by Dada Gorgud of an investigation to unmask a traitor amongst the Oghuz, in part ancestors of today’s Azerbaijanis. This account, complete with marginal notes by Dada Gorgud, is the first draft of the epic tales. It introduces us to the characters and themes of the epic – heroism and betrayal, love and lust, dungeons and dank castles, feisty maidens and grumpy knights. 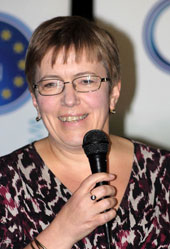 Interspersed with the account of the investigation in the incomplete manuscript of the title is another tale, that of Shah Ismail Khatai and his fictional double Khizir. The action is set in the Safavid court and during the battle of Chaldiran, fought 500 years ago this August between the forces of Shah Ismail and Ottoman Sultan Selim. Kamal Abdulla has taken historical events and imagined an extraordinary scenario, which could, well, almost be plausible. I won’t spoil the plot but can say that this version does answer questions about Shah Ismail that have long puzzled historians.

Author Kamal Abdulla is a leading scholar of The Book of Dada Gorgud. He explained to The European Azerbaijan Society’s Neil Watson its importance to his home readers.

This epic marks the very beginning of Azerbaijani literature, language and analytical thinking and operates as a form of moral constitution. The story shows how events can impact on perceptions and attitudes, and who is regarded as your enemy or friend. It reflects on emotions, such as love for the mother and behaviour in extreme situations. The book operates as a moral lesson and a university of life. Unfortunately, some of the heroes have been idealised in Azerbaijani folklore, thereby losing their humanity.

This leads us to the heart of The Incomplete Manuscript – the author takes familiar historical or literary heroes (familiar to much of his home readership, at least) and shows them in a completely different light, close-up, with their feet of clay.

I felt I had to consider the heroes of the epic from a previously unseen perspective and to depict the patterns implicit in their personalities. I aimed to show they are normal people with human foibles. Several Azerbaijani literary critics have claimed I sought to diminish the standing of these national heroes. However, I would argue that emphasising their humanity serves to enhance their stature.

H.E. Fakhraddin Gurbanov addresses the launch of The Incomplete Manuscript

All this talk of literary history may prompt the question – how well does the reader need to know Turkic epics or the Safavid dynasty to enjoy the book? I would say, not at all. Though it did send me scurrying to find out more about the subjects and to re-read Dada Gorgud. As the author says,

Initially I thought it would be impossible to really appreciate The Incomplete Manuscript without having previously read The Book of Dada Gorgud. For example, the book has been published in Portuguese; however, I strongly suspect that no-one in Portugal has read the original book. In fact, Portuguese critics reviewed The Incomplete Manuscript as a mythological detective story. My book should be regarded as an integral work in its own right…

The impetus to write this work has been in my heart and soul for many years. I studied The Book of Dada Gorgud as an undergraduate and my subsequent Master’s and Doctorate theses were related to its linguistic characteristics. I have also written several books about the ‘hidden’ Dada Gorgud, examining the mysteries of the saga. The main purpose of The Incomplete Manuscript is to reflect upon elements that have not previously been analysed. In my book, I am elucidating meanings that have not been outlined hitherto.

The Incomplete Manuscript is the first novel in a trilogy of ideas. The second novel is The Valley of the Sorcerers and the third No-One Left to Forget, though they are not out in English yet. 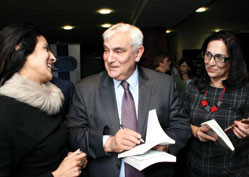 I would compare The Book of Dada Gorgud with the trunk of a big tree that has many roots, each of them a volume in my trilogy, Kamal Abdulla says. The key concept of The Incomplete Manuscript is ‘Do not make idols for your own consumption’, and for The Valley of the Sorcerers it is ‘do not live with hatred’. For No-One Left to Forget it is ‘do not be satisfied with living in just one world’, as it examines the co-existence of parallel worlds.

But to describe the book as having one main idea runs the risk of ignoring all the other ideas and threads in these novels. Perhaps now is the time for me to confess to bias, since I translated The Incomplete Manuscript into English and loved doing it. Even now, some time after working on the book, I keep finding something new in it.

Just as one story hides within another in the novel, one mysterious world is concealed behind another. What’s most precious in this artistic experiment is the constant glimmer of parallel worlds, literary critic Lev Anninskiy wrote in the introduction to the Russian translation. One mystery peeps out through another. Muslim script hides gingerly behind Christian letters, as though biding its time… Moreover, all the characters, including the modern-day narrator, are hiding something. This may be the paternity of a child, the purpose of their actions or their true identity.

This tension between what is seen on the outside, the external, visible cover and the essence within is part of Sufi thought, another concept explored in the novel, especially in the episodes involving Shah Ismail.

Asked why he decided to include the sections on Shah Ismail, Kamal Abdulla replied:

Shah Ismail’s story in The Incomplete Manuscript has been separated from the rest of the book. This section serves to emphasise the complicated and intricate nature of this manuscript. I have been criticised for my description and characterisation of Shah Ismail. People have questioned his inclusion, but my response is ‘why not Shah Ismail?’ There is intertextuality and real characters are inextricably interwoven with the mythological.

The intertextuality of The Incomplete Manuscript – its references to and reworking of other ‘texts’ – its exploration of the relationship between epic and novel, myth and storytelling, all make it of interest to literary theorists. But you don’t have to be a specialist in comparative literature to spot connections, such as that between Tapagoz, the one-eyed ogre of The Book of Dada Gorgud and The Incomplete Manuscript, and Polyphemus, the Cyclops of Homer’s Odyssey, or the Cylops heroes and villains of modern-day comic strips. 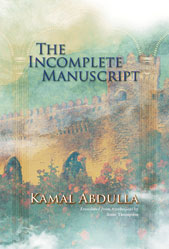 The narrator in The Incomplete Manuscript ponders in the Prologue, Which characters are older – Polyphemus or Tapagoz, Odysseus or Beyrak, Agamemnon or Salur Gazan, Penelope or Banuchichak? Rather than answer his question, he concludes that it does not really matter. The answer appears to lie in the pleasure of connections and ideas, and the understanding they can bring.

Today these questions are less relevant – they can be answered or not. The main point is that if the characters listed above can co-exist side by side, and if the name of one reminds you of another, then you have your answer. There will be no need to research into who is older.

Kamal Abdulla, who is also a playwright, has rewritten the sections about Shah Ismail as a play, Shah va Shair or The Shah and the Poet. The play is currently in the repertoire of the Azerbaijan National Theatre in Baku and has been performed in Georgia and Estonia too. Enquiries have even come from Italy about making The Incomplete Manuscript into a film.

A dramatized reading of the first section of The Incomplete Manuscript by actors from the ALOFF Theatre entertained guests at the English translation’s launch at the end of last year. Organised by The European Azerbaijan Society (TEAS), the launch was held in Waterstones’ flagship Piccadilly store in London and attended by over a hundred bibliophiles.

This translation is available from major bookshops in the UK and USA, online stores in both countries (including Amazon, The Book Depository and Barnes and Noble) and bookshops in Baku. The Incomplete Manuscript has also been published in Turkish, Kazakh, Russian, Polish, French, German, Portuguese, Japanese and Arabic.

The Book of Dede Korkut, translated by Geoffrey Lewis, was published by Penguin in 1974. Another translation, by Faruk Sumer, Ahmet E. Uysal and Warren S. Walker, was published by Texas University Press in 1991.

For book-lovers only one thing is better than talking about books, and that’s reading them. So we have published in the Literature section an excerpt from The Incomplete Manuscript about Basat and his battle with the One-Eyed Ogre, Tapagoz.

Born in Baku in 1950, Kamal Abdulla is a professor and doctor of philology. From 2000 to 2014 he was rector of Baku Slavic University, which specialises in the teaching of Russian and other languages and literature, including Azerbaijani and Turkish. In February this year Azerbaijani President Ilham Aliyev appointed Kamal Abdulla to the newly created post of state adviser on issues of multiculturalism and religion. He remains a corresponding member of the Azerbaijan National Academy of Sciences. He is the author of three novels, a wealth of poetry, short stories, plays and academic works.