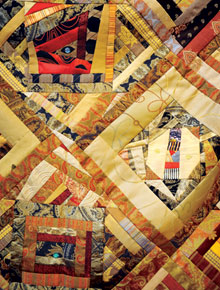 Dutch painter Vincent van Gogh was criticised by many for saturating his paintings with vivid, even heart-rending colours. In his lifetime few people supported Van Gogh’s art or saw the uniqueness of his vision. Only years later did people truly appreciate the talent and bravery of an artist who brought about a revolution in painting. Sometimes we surround ourselves with so much that is drab and boring that we don’t notice the bright colours of life. And soon we get accustomed to subdued shades. A few brave souls, like Vincent van Gogh, are able to fire up our lives with bright hues, though often they are misunderstood. Patchwork designer Khalida Nasirova can be considered one of those brave souls.

She lives in a lovely courtyard in Icheri Sheher, the old walled city of Baku. Her house is painted bright ochre and shrubs and trees grow in the yard. Her small but very hospitable home recalls a patchwork in itself. Everything is covered with colourful pieces of cloth – the sofa, armchairs, bed and table. She is especially proud of her magic room. It contains a collection of her patchwork, some of which has received awards at international exhibitions. Khalida khanim, why do you call it a magic room? we asked her. Because when you walk in, you enter a magic world. My patchwork is collected here and it takes me to my dreams. 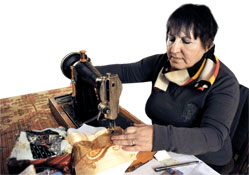 A scrap of a dream

Patchwork, also known as “pieced work”, is an applied art form in which scraps of fabric are sewn together. Each scrap can be a different colour, pattern or even material. Patchwork can follow geometric designs and be any size. A close relative of patchwork is appliqué, in which pieces of fabric, often brightly coloured or decorative, are sewn onto a larger piece of cloth. More often than not, patchwork is the top layer of cloth in a piece of quilting; it covers a thicker pad of material and a layer of backing cloth and is held in place by stitching.

Some of the earliest known examples of appliqué were found in tombs in ancient Egypt (10th century BC). Quilting, meanwhile, can be traced back to the Middle Ages in both Europe and Central Asia. In Britain, quilted vests and jackets were worn under armour or even instead of it. Quilting and patchwork grew in popularity and became a favourite pastime for women from rich and noble families too. Patchwork became a real art form with expensive fabrics such as silk, specially ordered from the East. In America, settlers’ wives made distinctive patchwork quilts as bedcovers, an art that regained popularity in the Great Depression when resources were scarce.

In Azerbaijan the combined art of patchwork, quilting and appliqué is known as qurama. For Khalida khanim, every work of qurama is a small piece of her dreams, dreams that she has been expressing in coloured cloth for almost 24 years. 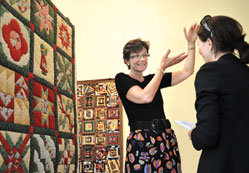 Drama and happiness in patches

We met Khalida Nasirova last summer during a patchwork exhibition in Baku organised by the German embassy. She was exhibiting a number of her works with another patchwork maker, Corinna Niestrath-Quelle, wife of the then ambassador to Azerbaijan, Herbert Quelle. It was immediately obvious who created which pieces. Those with light, soft colours were the work of the German artist whereas the bright, vivid pieces were the creation of Khalida Nasirova. As Frau Quelle told Visions, European patchwork is distinguished by its clear patterns and harmonious palette of colours. In fact, her work proved her words. Mainly beige, pink, grey and blue dominated in her pieces in a very European style. As you looked at them, you become as calm and peaceful as their patterns and colours. Khalida Nasirova’s way of sewing is completely different and came as a pleasant surprise to her German colleague: I liked Khalida’s work very much. It is so vivid and demands a response. I don’t know which style she follows, but every piece she has done is part of life – drama or happiness… so it has a very emotional feel.

Later, when we talked to Khalida Nasirova in her Icheri Sheher home, she told us how she became a qurama maker. As it turned out, qurama came into her life just 24 years ago, but left a bright, deep trace. Her creative urge to self-expression began with the black events of 20 January 1990, when dozens of peaceful civilians in Baku were killed under the tracks of Soviet tanks. 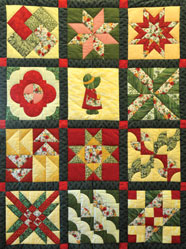 I remember that day. Dozens of the wounded were taken to hospital and visited by their relatives, neighbours and colleagues. I went hospital visiting too. And once when I was in the hospital I noticed an interesting quilt, which a patient had been given by her relatives. The quilt was sewn from different pieces of fabric and looked very unusual. I was interested and asked about the quilt. They told me it was qurama. When I got home, I looked for pieces of fabric to make my first patchwork. I did it the same day. So, from that time qurama became an important part of my life. It was both dramatic and happy – dramatic because it was somehow related to those bloody events, and happy because it marked a new beginning in my life.

Neither style, nor rule

It’s interesting that Khalida khanim has a scientific background. She has been working for the National Academy of Sciences’ Institute of Radiation Problems for a long time. Now she does both – goes to work during the day, and makes qurama at night. So she holds a further degree as a Candidate of Chemistry and is a member of both the Azerbaijani and Russian Unions of Artists. Quite an unusual combination, isn’t it? But Khalida khanim seems to feel more warmth towards patchwork, at least that was the impression we got during her master-class for Visions.

She has a very simple set of tools: scissors, a ruler, a pen and needles. What else do I need? Nothing. Just my imagination and then I can start. When I see pieces of fabric, I begin to imagine my future work. I don’t follow any style, neither European, nor Asian. I don’t even accept any geometric rules; I don’t do any drafts, I just cut and sew pieces as my soul demands. It all comes spontaneously. 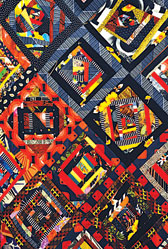 A fragment from Khalida Nasirova’s Composition 1

She takes out many small pieces of different fabric from an old box and starts to set out a new qurama. You see I found a very attractive scrap with a buta pattern on it. This is exactly what I need. It should be right in the middle. I always start from the middle. Now I’m going to find other pieces of fabric that go well with it. You know, I’m often accused of not following the rules of patchwork. And they may be right because I have never studied patchwork. I have felt it and done it in my own way… It may seem a mess, but I think that every disorder has its own order.

Khalida’s works don’t follow a distinct order; rather the patterns supplement each other in their different sizes, shapes and colours. In her Composition II and Kaleidoscope the patterns resemble stories collected in a book. Each pattern is a story in its own right, but together the stories form a meaningful whole. Her piece The Look has eyes looking out at the viewer – all-seeing and all-knowing.

Tahir Salahov, People’s Artist of the USSR, has this to say about her work: Nasirova’s patchworks are real works of art with a vivid range of colour. They are outstanding and sometimes even contain plotted fantasies. The dignity of Khalida khanim’s work lies in the personality of their creator.