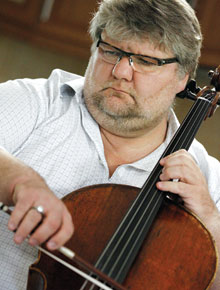 Look through back issues of Visions and the name Dmitry Yablonsky crops up more than once. So what is a Moscow-born, Juilliard-educated, world-renowned cellist and conductor doing in a journal about Azerbaijan? Well, the CD review that follows this interview is part of the answer, as are the Qabala International Music Festival and Beltmann Pianos.

The country weaves its magic over a significant number of visitors, who find themselves unable to break the spell. Dmitry is by no means a passive recipient of the charm, though; it is fair to say that he has more than fully returned the favours bestowed on him.

As co-founder and co-artistic director of surely one of the world’s most enjoyable festivals, he has cast his own magic over five summers of music in Qabala.

Before that, he came up with an idea that feeds body and soul in that town overlooked by the majestic Caucasus. The Beltmann piano factory commenced production in 2009 with Dmitry as general director. Now that the factory is up and running, and sales outlets are established in Baku and Germany, musical performances make a greater claim on his schedule. He still harbours ideas, however, of forging links with the Bayreuth-based Steingraeber company.

Performing music is at the heart of our conversation as we sit under a chilly February sun in Maiden Tower’s shadow, sipping a glass or three of warming tea. 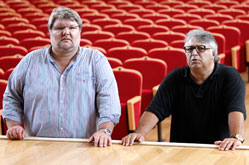 Dmitry is understandably pleased to have copies of his latest CD recording – of Qara Qarayev’s Seven Beauties and Path of Thunder suites (note that Kara Karayev is a transliteration of the Russian form of his name). This is the fourth album of Azerbaijani music that he has recorded for the Naxos label; it was preceded by Azerbaijani Piano Concertos (also with the Royal Philharmonic Orchestra under his baton), Fikret Amirov’s Shur and Qarayev’s Third Symphony (these last two featuring the Russian Philharmonic Orchestra).

Dmitry talks energetically of extending this catalogue up to 20 albums and the possibility of a series of concerts to ensure that the Qarayevs, Amirovs, Hajibeyovs, Quliyevs and others make their way onto the world’s repertoires and playlists. The Qabala Festival has already introduced top orchestras to the country and its music, with the Royal Philharmonic appearing twice and playing Azerbaijani concert works in London. Dmitry is also engaged on project sponsored by The European Azerbaijan Society to create digital scores of the great classical works, to make them easily accessible to orchestras wanting to add Azerbaijani strings to their bows.

It is a surprise for those of us who come across these works for the first time that they are not already well-known and played. On the most basic level, Qarayev’s waltz from Seven Beauties has such a catchy theme that it has almost become a cliché in the former Soviet area, but not to western ears. For our Russian Azerbaijani patriot, there are two explanations.

He [Qarayev – ed.] was probably a nice man; he lived in Baku, was loved by his students and he kept to himself. Also, the country could do more to promote their culture. 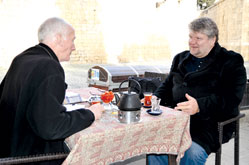 Discussing music and Azerbaijan at the foot of the Maiden Tower

Previous visits to his office in the Beltmann factory had made clear that Dmitry’s love of the culture extended beyond music, as I walked across a dozen carpets to reach his desk. But there is frustration that their creators too are still largely unknown and unappreciated:

I feel hurt, I take it personally, when I see that Azerbaijan is known only for its fantastic produce. I feel hurt that these carpets are called Caucasus carpets. Where is that? These are Azerbaijani carpets! It’s a huge misunderstanding.

Of course, there are many calls on public funds, many political priorities, and the almost overwhelming weight of the problems consequent to the ethnic cleansing of Nagorno-Karabakh. The years of Russian and Soviet cultural domination may also have led Azerbaijanis to take their own culture for granted, so its promotion has been a late starter. Hence the impatience of foreigners who are amazed to find such gems tucked away unheeded at the back of a drawer – and the desire to yell, Hey, just look at this!

He muses again, on the possibility of a combined art and music event, then: Baku is like my second birthplace….

And this born-again Azerbaijani owes that rebirth to the rector of Baku’s Academy of Music, pianist and composer Farhad Badalbeyli, who first brought Dmitry and his pianist mother Oxana Yablonskaya to Azerbaijan on tour. A creative friendship developed and soon bore fruit:

He showed me the music of Qara Qarayev and I immediately made a CD – in 2007 (the Third Symphony mentioned above – ed.).

As joint artistic directors of the Qabala Festival and with joint concerts abroad, they continue their mission to spread the word, the scores and the sounds of Azerbaijani music. 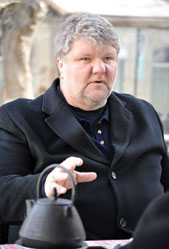 The festival brings top-notch classical musicians to broaden the local audience’s experience and enthral them with accessible programmes (and all for free). A mugham evening is also now a fixture; certainly popular with Qabala people, it offers the international performers a chance to encounter the indigenous culture.

Two years ago, this exchange of experience moved to a new level when the Festival featured a piece commissioned from Russian composer Alexander Tchaikovsky. Khojaly Requiem produced probably the most moving moments of the Festival’s five years, as Yuri Bashmet’s Moscow Soloists orchestra played into the night, with Badalbeyli and Yablonsky on piano and cello and Sahib Pashazade contributing a plaintive tar.

Still anxious to record the piece, Dmitry will, meanwhile, take it abroad as he conducts the Jerusalem Symphony Orchestra through their 2015-16 tour.

As for this year’s Qabala Festival, from 22 July to 1 August, he drops the name of the Shanghai Philharmonic Orchestra and a few other enticing details not yet confirmed. Go to the gabalamusicfestival.com website to make sure you don’t miss out.

Did I tell you I’ve become music director of the Kiev Soloists, a wonderful chamber orchestra?

And we wonder how long it will be before their repertoire too is expanded.

The teapot may be drained, but Dmitry Yablonsky’s wellspring of ideas flows on; a ballet in Paris, or New York, a filmed musical tour of the country, TV, websites – anything to share the joy of the music he loves to make. We leave warmed by the tea, his genial enthusiasm, the anticipation of an evening with Seven Beauties and the promise of summer sounds in Qabala.