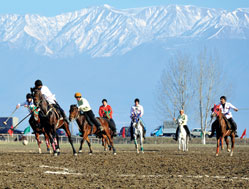 The maxim ‘the closer you look the more you find’ is highly appropriate for Azerbaijan, especially when the search takes you off the beaten track. And so it was with our recent quest for the secret of chovgan.

Firstly, what is chovgan? Answer, not quite ‘golf on horseback’, as it was once described to me, more likely a precursor of polo.

The spark was struck in the summer months while we were pursuing the intriguing stories surrounding the Karabakh horse. Khandan muellim, our fount of information on all things equine, mentioned that the golden wonder horse was ideal for chovgan. Naturally we then wanted to see a game and he said that the national championships would be held in December.

As the tail end of November wagged, there was news that Azerbaijan had proposed chovgan for entry onto UNESCO’s list of Intangible Cultural Heritage in Need of Urgent Safeguarding. The intergovernmental committee that was to make the decision was due to meet in Baku on 2-7 December. A highly prestigious occasion to be sure, but the news whetted the appetite for horses at full gallop rather than watching signatures applied to paper.

Unfortunately, while independent Azerbaijan has made great strides in many areas, there is some way to go in the essential capitalist skills of publicity and marketing. Even the basics – tell ’em who, why, what, where and when! – are too often underrated here.

And so it was in early December; everyone knew about the UNESCO signing, but no one knew about the actual game – not even people at the Equestrian Federation. Determined not to miss out, I badgered friends and colleagues alike,

The chovgan championships, when and where?

By the time we found out that the President’s Cup – no less – was to be held over six days, 15-20 December, we could only arrange to be there for the final day.

Frustrating? Well, yes, but as it turned out once we knew that 10 o’clock, 20 December was the when, and Dashuz village near Sheki was the where, irritation turned into delicious anticipation of a venture that I just knew would be worth all the effort. In fact, by the time driver Eldar, photographer Eldar and I set off mid-Thursday afternoon for the five-hour westward drive, there was twofold anticipation in the air…

First, obviously, was the prospect of renewing acquaintance with these wonderful horses in athletic action, but there was a backstory, too. In fact it’s a developing story about how the Karabakh horses survived the war that drove them from their homeland. We had called one of the men responsible for their continued existence and asked if he would be at the championships. Unfortunately not, but his son was actually taking part.

We didn’t know whether Rashad Hasanov’s team had progressed in the competition, or whether he would be there on the final day. But wouldn’t it be great if the two stories came together by chance in Dashuz village of all places? – Go on, find it on a map.

We had to stop over in Sheki, certainly no hardship, so the evening meal had to be the town’s signature dish piti. Photographer Eldar had been on the previous piti mission that had treated itself to the Caravanserai’s offering; for variety he wanted to try Gagarin’s (named for the cosmonaut, naturally) and to Gagarin’s we went. Suffice to say it’s hard to imagine how anything could have been tastier – soup and a main course from a single Sheki piti pot – perfect.

So the sun rose; now old habits die hard and even after 13 years my English mentality still holds, and interprets 10 o’clock as meaning, well, 10 o’clock. Thus more badgering followed breakfast before we set off south in search of the Georgia road and Dashuz.

I should have known. Seeing the sign for the stables, we turned in, pulled up, wondered where the crowds were, asked one of the few people wandering around and learned that the start was, of course, at 11.00…-ish. 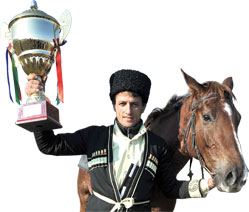 And how lucky that was. We had time to turn northwards and take in the fresh air of a crisp morning and the panorama: craggy, snow-dusted peaks of the Great Caucasus glowing in the bright morning sun, suspended above a shadowy plain.

Then a lucky-dip question to one of the early birds,
- Is Rashad Hasanov here?

How lucky can you get?

So, a look at the premises; an open field marked out as a football pitch with a couple of extra circles – and chovgan goalposts. The going firm with frosted patches. Down the nearside a grandstand, to seat maybe 500.

A stroll up to the stables and a paddock with 20 or so Karabakh horses chomping in unison on their breakfast hay; the soft crunch to organic rhyme and rhythm – the music – held us as much as the vision.

More people were drifting in, so we strolled back down to the arena,
- Is Rashad here?
- Rashad Hasanov? Not yet, but he will be.

Beginning to think our man was known.

The foreigner stood out, so we were soon ushered towards Elman Qadirov, director of proceedings. Obviously a busy man, but it was still early and there is always time for a guest in these parts.

The posters announced the 8th President’s Cup and Elman muellim filled in the details. The first in modern times was held in 2006, along with the opening of the Dashuz facilities and a 45km marathon. Six teams had entered that year. The tournament had expanded every year since then and the final we were about to watch was the culmination of six days of competition between 20 teams, representing many of the country’s regions, including those currently under occupation. 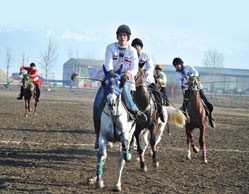 It began to look like a real community event; each day’s packed programme had opened at 7 a.m. (breakfast!) and had run through to 9 p.m. (supper). It was a knockout competition, but teams defeated early at chovgan stayed on to play in other games: sur papaq, a kind of basketball on horseback, passing a ball between teammates aiming to get it through the hoop at their opponents’ end, or simply papaq (the name of the Caucasian wool hat), where the idea is to earn points by grabbing the hats of the opposing team. Atustu gules (horse wrestling) has two riders facing each other across a circle; they have five minutes to try to drive the other back out. There was also yayliq; five headscarves placed at 40 metre intervals on the ground for each team of four riders; with a 30 second maximum time limit, the winning team is the quickest to pick up all the scarves from horseback, of course – we’ll have to make sure we get to the early stages next year.

Finally we asked the inevitable:

- Is Rashad here?
- Rashad? Not yet, but he will be. You know, we’re related, he’s my aunt’s grandson (that’s first cousin once removed, by my calculations).

Leaving Elman muellim to get on with organising the final day, we went to check on the teams and make sure I could follow a game I was seeing for the first time and Eldar could get his fill of pictures. By now a crowd was gathering and the musicians were getting up steam. Yes, musicians. To gee up the crowd and add spice to the game, two zurna players skirled up a ferocious whirlwind of sound while the two-member rhythm team banged out an irresistible beat on their nagharas.

The riders were gradually gathering at the edge, readying to make their entry; one or two police were holding back enthusiastic onlookers, but we had our question:

With press cards at the ready in case of official intervention, we ran over to the rider in yellow:

- Rashad Hasanov? Can we talk after the game?
- Of course. But I have to play now.
Sheki, the ‘home team’, made the running in the early years of the modern championship, winning three times and thus keeping the first trophy. But the 8th final was between two teams from Baku, imaginatively called Baku-1 and Baku-2. Unsurprisingly, we were biased and biting nails for the five yellow shirts of Baku 2. 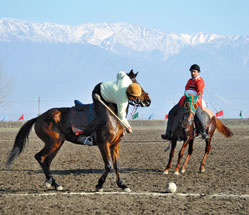 Baku-2 on the ball in a tense final match

Nail-biting it was. A terrific end to end spectacle; first the whites then the yellows connecting with their long-handled mallets to send the ball, a sort of softish, half-size football, bobbling and bouncing towards the opponents’ goal. Like us, the crowd was not exactly even-handed. The whack of a yellow mallet sent our striker and his horse hurtling hell for leather down the pitch, urged on by raucous chants of ‘Rashad! Rashad!’… and the zurnas … and the nagharas. The first goal emerged from a skirmish; Samir Pirimov was credited with putting Baku-2 ahead. But it was an even tussle and, it has to be admitted, a deserved equalising goal came before the first 15 minutes were up.

A ten-minute interval gave horses, riders, musicians, spectators and nails a break, but we were soon off again and there was no let up in contest or pace, despite some tricky conditions, especially at the edges of the pitch. There were a few falls as turns were taken too fast, but after a few seconds to remount, the surges resumed. Finally, breakthrough. A charge down the pitch after a long ball, the crowd yelled, zurnas blared, nagharas banged crazily and local hero Rashad drove the ball between the posts; fairy-tale complete. Try as they surely did, Baku-1 could not get back on terms and it was all over, 2-1.

Whirling laps of honour with mallets aloft and all-round excitement among spectators thoroughly entertained by a thrilling and evenly contested spectacle. Torn between wishing there were more watching, while enjoying the informality and friendliness of what was basically a village event, I come down on the unselfish side; more should have the chance to see this really great game.

And yes, we did get an interview from a victorious and still saddle-bound Rashad Hasanov, but he is part of another story too. For now let’s leave him basking with his teammates in the glory of winning the 8th Chovgan President’s Cup, knowing that there’s more to come from a land where the stories never end.