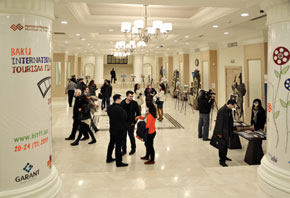 Festival-goers relax in the Nizami Cinema lobby
The first Baku International Tourism Film Festival (BITFF) opened its doors to film directors from all over the world from 20 to 24 November 2013. Supported by the Ministry of Culture and Tourism of Azerbaijan, BITFF featured 78 films by 74 directors from 31 countries in its competition programme. In all, 215 films by 140 directors from 38 countries were sent to the festival, BITFF Director Fariz Ahmedov said. The competition programme also included works by 14 Azerbaijani directors.

Films from the USA to the UAE, the UK to Kazakhstan and almost all countries in between fought for the best film nomination. Winners were selected in seven categories – Country, Region, City; Culture and Tradition; Extreme Tourism; Ecotourism; TV Reports; Commercials; and the National Award. 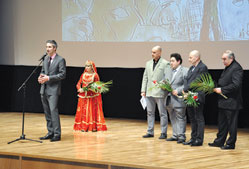 Culture and Tourism Minister Abulfas Garayev said that the festival also draws the attention of the world to Azerbaijan’s tourism potential as an international centre of historical and cultural heritage. Azerbaijan’s election to the Executive Board of the World Tourism Organization is a positive result of the country’s promotion as a tourist destination, the minister continued, adding his hope that the festival would become a regular event.

Return to the Caucasus

The festival was opened by a joint Azerbaijani-French film, Return to the Caucasus, which stars renowned French actor Gérard Depardieu. Playing himself, Depardieu follows in the footsteps of 19th century author Alexandre Dumas (père). He visits the places in Azerbaijan that inspired Dumas to write his book Travels in the Caucasus (Voyage au Caucase). On his original journey Dumas was accompanied by artist Jean Pierre Moynet, who sketched places and people along the way. French artist Mathieu Sapin was Depardieu’s Moynet, travelling with him through Azerbaijan.

The film was directed by Stéphane Bergouhnioux and Jean-Pierre Devillers and also involved Azerbaijani TV presenter Fuad Akhundov and actor Enver Hasanov. Visions was lucky enough to follow the filming of the documentary so we were eager to see the film’s premiere. It did not disappoint and received enthusiastic applause from the festival audience. 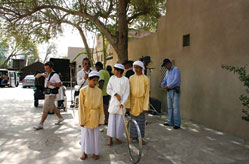 The films were assessed by an international jury of film-makers and tourism experts from all over the world. Chairman of the Jury Azer Garib, a tourism expert and film-maker from Azerbaijan, highly appreciated the role of BITFF in developing Azerbaijani tourism. As he told Visions, the festival allowed Azerbaijan to make many friends from many countries. It’s very good PR for Azerbaijan and its tourism potential, he added.

Return to the Caucasus received the Special Jury Prize, while the film Definitely Dubai by UAE director Babek Amini was awarded the Grand Prix and cash prize of 4,000 euros. Films from Macedonia, Croatia, the USA, Greece and Romania received prizes in various categories.

Azerbaijani director Vasif Mammedzade was given the National Award for his film Fortress – a City Inside a City. US-Azerbaijani production Land of Fire by Phillip Baribeau received the first prize in the Extreme Tourism category, while Resorts of Azerbaijan: Naphthalene by Ayhan Salar came second in the Commercial Tourism category. Azerbaijan also had two third placed films – Our Past: Carpets by Billura Aslanova in the TV Reports category and Sergey Shanovich’s Welcome to Azerbaijan: Land of Flame in the Country, Region, City category.